The Taper Arrives (Without The Tantrum)

Nevermind the November 2 gubernatorial races. This week, all eyes have turned to a public official who packs far greater clout than any state governor.

After rhetorically preparing Wall Street for months, Federal Reserve Chair Jerome Powell on Wednesday finally made it official: the “tapering” of the central bank’s asset purchases is about to commence. See this November 3 tweet: 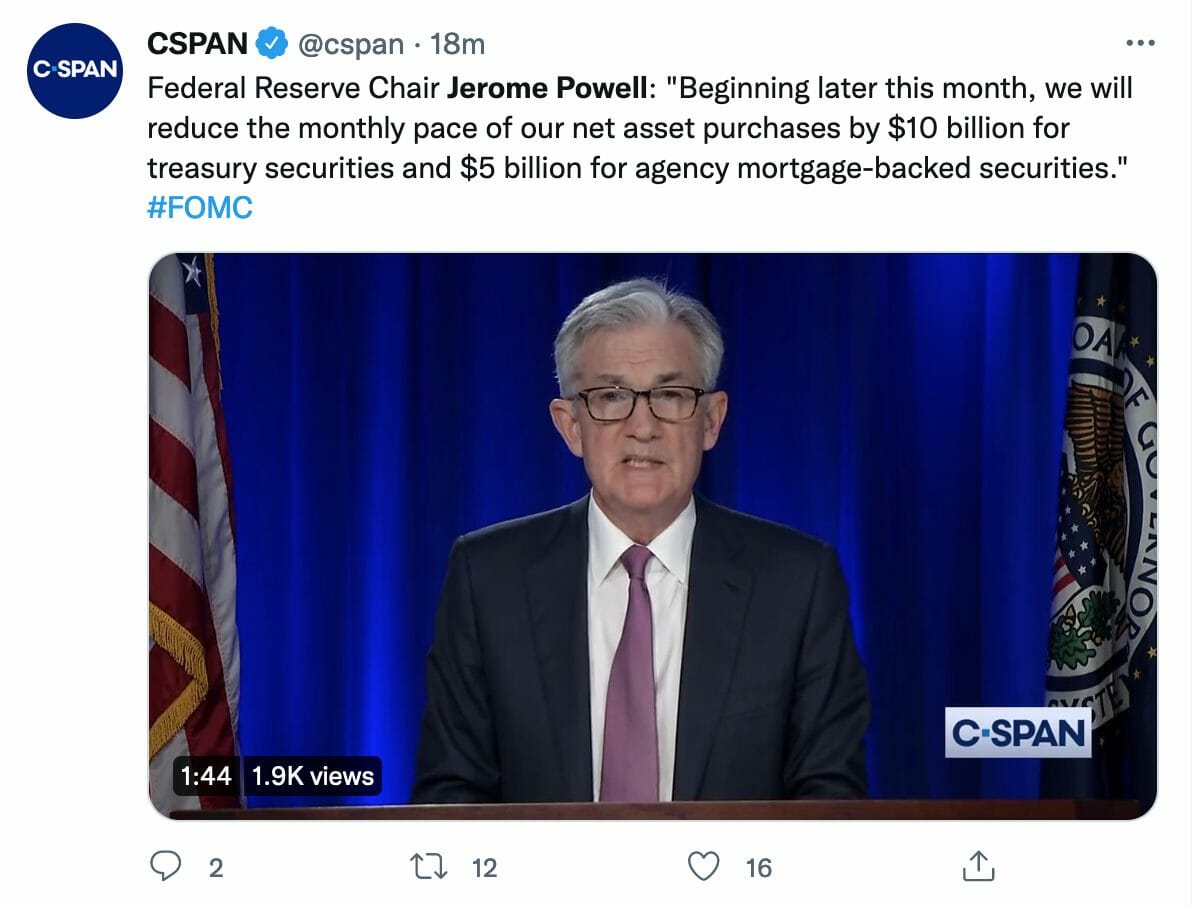 At the conclusion of its two-day meeting Wednesday, the Federal Reserve’s Federal Open Market Committee (FOMC) didn’t reveal anything earth shattering. The FOMC’s news was a non-event, which was just fine with investors.

“In light of the substantial further progress the economy has made toward the committee’s goals since last December, the committee decided to begin reducing the monthly pace of its net asset purchases.”

The Federal Reserve has been purchasing $120 billion in mortgage-backed securities and Treasury bonds every month to pump liquidity into the financial system but stated Wednesday that starting this month it will reduce that amount by $15 billion per month.

The Fed’s main policy interest rate, which affects borrowing costs for individuals and businesses throughout the economy, remains set at near-zero.

Unlike in 2013, the news of tapering really wasn’t a surprise. Wednesday’s announcement underscored the Fed’s cautious go-slow approach in pulling back stimulus. This time around, Wall Street liked what it heard. Instead of a tantrum, investors gave a collective cheer.

Wednesday marked the fourth session in a row that the Dow, S&P 500, and NASDAQ all closed at new highs. Wall Street equates the taper with economic strength.

The biggest worry on Wall Street right now is inflation. The personal consumption expenditures (PCE) index picked up by 4.4% in the year through September, significantly above the Fed’s 2% goal. However, the Fed insisted Wednesday that inflation levels are elevated on transitory factors, such as supply chain disruptions that should eventually ease.

Read This Story: The FOMC Tightrope

The first so-called taper tantrum occurred in mid-2013, when the Fed announced it was considering how to wind down its extraordinary stimulus. That mere chatter prompted a correction among stocks.

But the taper already is priced into stock prices. It would have been shocking if the Fed hadn’t announced it. Also keep in mind, rate hikes are still about two years away.

The only hawkish tilt to Powell’s remarks Wednesday was his assertion that the Fed may change the pace of the taper if warranted by economic conditions, but such adjustments cut both ways.

Further, the Fed’s pullback may also have been an acknowledgement that the stimulus is exerting a corrosive effect on markets by creating asset bubbles.

The current investment climate is tricky to analyze. Some forecasters say the U.S. economy is on the upswing and will support rising market valuations even as Fed stimulus recedes. Other market gurus worry that the Fed is acting too quickly, because the pandemic-battered economy may not be ready to support itself without the continuing largesse of our central bank.

One factor keeping this bull market alive is FOMO (Fear Of Missing Out), which prompts investors to indiscriminately rush into stocks. You need to stay selective. And that’s where our Investing Daily analysts can help.

Are you looking for ways to generate income without having to worry about economic fluctuations or changing Federal Reserve policy? Our investment team just unveiled the most ambitious initiative in the history of our company. It’s called the “Income Millionaire Project.”

John Persinos is the editorial director of Investing Daily. Subscribe to his video channel.