Pot and Psychedelics: The Voters Speak

The 2020 general election was grueling and interminable, an electoral version of the Baatan Death March. The losers are still contesting the results. Last Tuesday, American voters went to the polls again.

Several high-stakes measures appeared on the ballot Tuesday, with the Virginia and New Jersey gubernatorial races hogging the spotlight.

However, strangely enough, the mainstream media have largely ignored the various initiatives pertaining to marijuana and psychedelics. Too “wonky” and bad for television ratings, perhaps.

Here’s a quick review of the off-year election results that marijuana and psychedelics investors need to know.

Colorado voters Tuesday rejected a ballot measure that would have increased the state’s tax on marijuana to support education programs. A similar local measure in Denver also was defeated.

The state’s elected officials have long advocated marijuana legal reform as a way to generate tax revenue to improve schools. As of Tuesday’s election, those efforts are dead (for now).

Detroit voters approved a ballot initiative to decriminalize a wide variety of psychedelics, making Motown the latest in a growing number of jurisdictions to lift restrictions against these substances.

The measure states that the city will “decriminalize to the fullest extent permitted under Michigan law the personal possession and therapeutic use of Entheogenic Plants by adults.” Here’s a tally of Tuesday’s results (see chart). 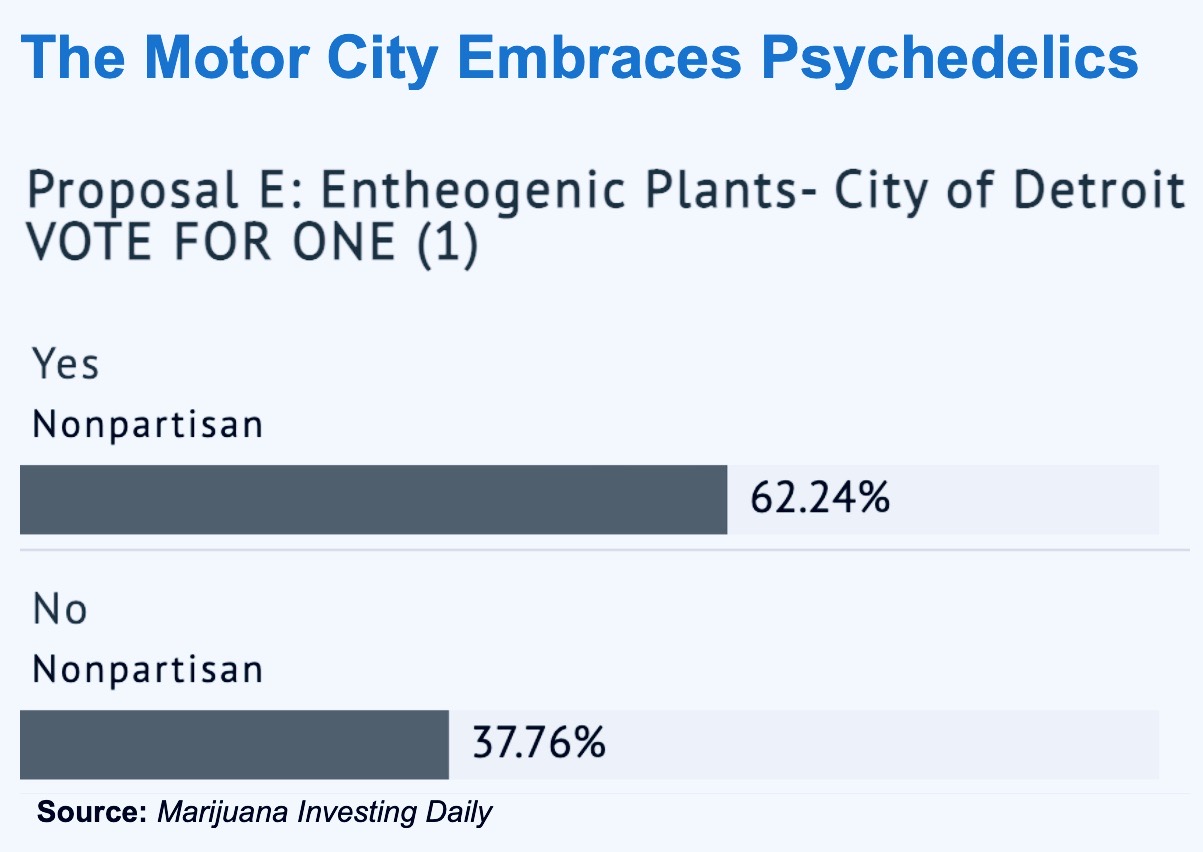 Detroit’s new policy will also “make the personal possession and therapeutic use of Entheogenic Plants by adults the city’s lowest law-enforcement priority.” Entheogens are psychoactive substances that induce alterations in perception, mood, consciousness, cognition, or behavior. Hallucinations are among the common effects.

On the state level, Michigan state senators introduced legislation in September to legalize the possession, cultivation and delivery of several psychedelic substances.

From California to Massachusetts and several points in between, state and local governments have decriminalized psychedelics, laying the groundwork for a new industry. The pied piper was Denver, which in 2019 became the first jurisdiction in the U.S. to decriminalize psilocybin fungi.

Philadelphia voters approved a referendum on marijuana legalization that puts pressure on state lawmakers to enact pot reform across the Quaker State.

The measure adds a section to the city charter that states: “The citizens of Philadelphia call upon the Pennsylvania General Assembly and the Governor to pass legislation that will decriminalize, regulate, and tax the use, and sale to adults aged 21 years or older, of cannabis for non-medical purposes.”

A bipartisan bill in the Pennsylvania Senate to legalize marijuana was officially introduced in October 2021.

The Virginia legislature legalized adult-use cannabis earlier this year, but the incoming governor can either impede or expedite the implementation of cannabis programs and regulations. Youngkin is a social conservative endorsed by former President Donald Trump. The Virginia House of Delegates also passed from Democratic to Republican control. The GOP in Virginia tends to be anti-marijuana.

But history shows that meaningful reform never runs in a linear fashion. Despite occasional push-back from prohibitionists, the legalization of pot and psychedelics is an inexorable trend.

Companies that develop, process and sell psychedelic substances are in their infancy, as was the case when marijuana legalization was first gaining momentum. The best time to profit from accelerating trends is early, before the rest of the investment herd catches on. Proactive investors stand to reap a windfall.

For our latest report on the best investment opportunities in cannabis and its ancillary industries, click here.