One of the most frequent questions I get from investors is “How should I position my investments for an inflationary climate?”

Although the causes are hotly debated, especially on social media, there’s no question consumers are dealing with higher prices. In some cases such as gasoline, the price increase is significant.

Officially, the Consumer Price Index (CPI) is up 5.4% over the past 12 months. But if you are heavily reliant on gasoline, use natural gas for heating or power, or have had to buy a used vehicle, you have paid 20% to 40% more than you did a year ago.

There are a few reasons for the rise in prices, but mainly it can be attributed to recovery from the COVID-19 pandemic. For example, in the energy sector 3 million barrels per day (BPD) of product was lost when prices collapsed in the spring of 2020. Oil demand has now recovered, but only about half of the lost oil production has come back online. That’s a recipe for much higher prices.

Bond yields have risen slightly, but they haven’t kept pace. The 10-year Treasury yield is only 1.4%, not an appealing prospect given the inflation rate. In Warren Buffett’s annual letter to his shareholders this year, he indicated he isn’t impressed by bonds these days. He wrote:

“Bonds are not the place to be these days. Can you believe that the income recently from a 10-year Treasury bond, the yield was 0.93% at yearend, had fallen 94% from the 15.8% yield available in September 1981? In some large countries like Japan and Germany, sovereign yields are negative. Fixed-income investors worldwide, whether pension funds, insurance companies or retirees, face a bleak future.”

So what is an investor to do? That’s a topic that was recently covered in one of the weekly Fidelity Viewpoints articles. I have highlighted before for investors the kinds of sectors that do well in an inflationary environment. 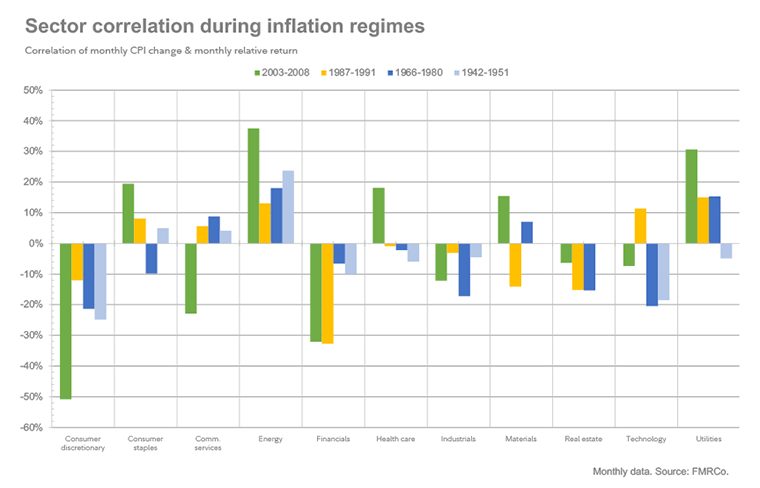 Watch This Video: Inflation Hedges Are Gaining in Popularity

I think the reason energy outperforms during periods of inflation is pretty straightforward. As we are seeing right now, inflation is often driven by energy prices. Higher energy prices mean great performance from energy sector companies, which is what we have seen this year.

Financials have been the second best-performing sector over the past year, behind energy. But this graphic suggests it may be prudent to redeploy some of those profits.

The performance of utilities and real estate defy conventional wisdom. Inflation usually drives interest rates higher, and that in turn increases borrowing costs. Utilities are capital-intensive businesses, so they tend to carry higher debt loads than some businesses. Therefore, rising interest rates can impact them disproportionately as interest payments erode cash flow. So, the performance highlighted in the graphic is somewhat surprising.

Real estate is generally viewed as a good inflation hedge, but again the graphic suggests that’s not necessarily the case.

As the article points out, there’s no guarantee that the trends of the past will play out in the future. But it’s probably not a bad idea to take note of what has done well and what has done poorly in previous inflationary environments.

I always prefer using a system that is based on actual results. That’s where our Investing Daily analysts can help.

Are you looking for ways to generate income, even during inflationary periods? Our investment team just unveiled the most ambitious initiative in the history of our company. It’s called the “Income Millionaire Project.”