“Something is happening here / But you don’t know what it is / Do you, Mr. Jones?”

Last weekend, I attended a party at the home of a friend to watch college football. Over burgers, hotdogs and beer, the conversation among these suburbanites (most of them parents and politically conservative) turned to the investment opportunities of marijuana.

You know a social revolution is afoot, when archetypes of the middle American voter are eager to put their hard-earned retirement savings into the equities of companies involved in cannabis.

The country may be divided, but it stands united on at least one issue: cannabis. That’s further reason why every portfolio should have exposure to the marijuana industry.

From social stigma to mainstream business…

The polls were conducted by Rasmussen Reports and Gallup, and both were released on November 4.

Rasmussen asked Americans if they support the “national legalization of marijuana,” and 62% of respondents said yes.

The Rasmussen survey was conducted October 21-24. Among Republicans, 54% said they back legalization. That’s compared to 68% of Democrats and 62% of those who pegged their political affiliation as “other.” The majority level of GOP support is remarkable, considering how social conservatives currently dominate the party.

The survey also examined whether respondents thought legalization should be a federal, state, or local matter. Nearly half (47%) said the federal government should control the legalization of cannabis, 32% said it should be left to the states, and 11% favored localities.

Also on November 4, Gallup released a poll with similar results. Gallup found that 68% of U.S. adults back legalizing cannabis. In 2019, Gallup’s polling showed that 66% were in favor. Only 32% of Americans currently oppose legalization (see the following tweet). 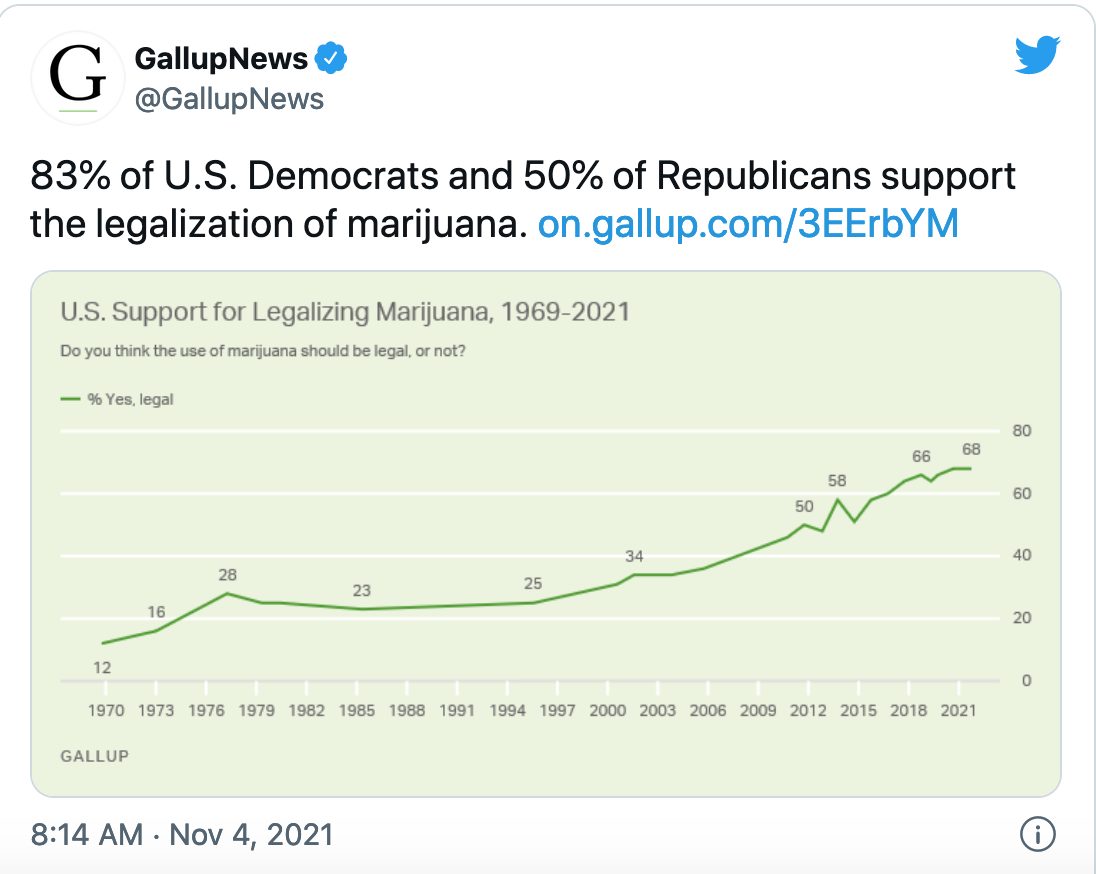 Gallup has been polling Americans about their marijuana consumption habits since 1969, when only 4% reported trying marijuana. For decades, the percentage of Americans who said they’ve actually tried pot hovered in the 30% range.

Meanwhile, in recent years several state and local jurisdictions have decriminalized psychedelics. Ballot initiatives to lift restrictions against these substances are popping up around the country like mushrooms (pun intended). From soccer moms to corporate executives, increasing numbers of Americans are “micro-dosing” substances such as LSD.

Big Pharma is investigating the benefits of psilocybin (the active ingredient in magic mushrooms) and LSD for the treatment of various physical and mental ailments.

The trend toward psychedelics legalization is paving the way for early investment opportunities. It’s not just the big boys of the pharmaceutical industry getting involved. A slew of clinical stage biotech start-ups recently have gone public, staffed with experienced scientists who are researching the medicinal properties of mind-bending drugs once associated with the radical subculture.

The best time to profit from accelerating trends is early, before the rest of the investment herd catches on. Proactive investors stand to reap a windfall. For our latest report on the best investment opportunities in cannabis and its ancillary industries, click here.