The biggest infrastructure spending package in the United States since President Eisenhower is wending its way to President Biden’s desk. Yep, you have to go all the way back to Ike and the construction of the Interstate Highway System to find a public works plan of comparable scope.

As Biden quipped to reporters on Saturday after the bill passed: “Finally, infrastructure week!” Supporters of the infrastructure bill are giddy, but perhaps the giddiest of all is Wall Street.

Industrial, materials and construction stocks are on the upswing. The benchmark Global X U.S. Infrastructure Development ETF (PAVE) jumped 1.24% on Monday, surpassing the exchange-traded fund’s all-time high. PAVE has racked up a year-to-date total daily return of 25.1% (as of market close November 8).

In pre-market futures trading Tuesday, the major U.S. stock indices were essentially flat as Wall Street took a breather from its record-smashing run-up.

The infrastructure bill offers $110 billion toward roads and bridges. The bill also provides $7.5 billion for zero- and low-emission vehicles. Another $7.5 billion would go to constructing a nationwide network of plug-in electric vehicle charging stations. Another $65 billion is devoted to update the electrical power grid.

The White House made concessions along the way and the $1.2 trillion bill is considerably smaller than the originally proposed 10-year, $3.5 trillion plan. But in today’s viciously divided Washington, the bill’s passage shows that the art of compromise isn’t completely dead on Capitol Hill.

The price tag of the bill seems large, but so are the needs it addresses. According to the research group Global Infrastructure Hub, the funding gaps to fix America’s crumbling infrastructure for all sectors will, if left unaddressed, reach astronomical proportions (see chart). 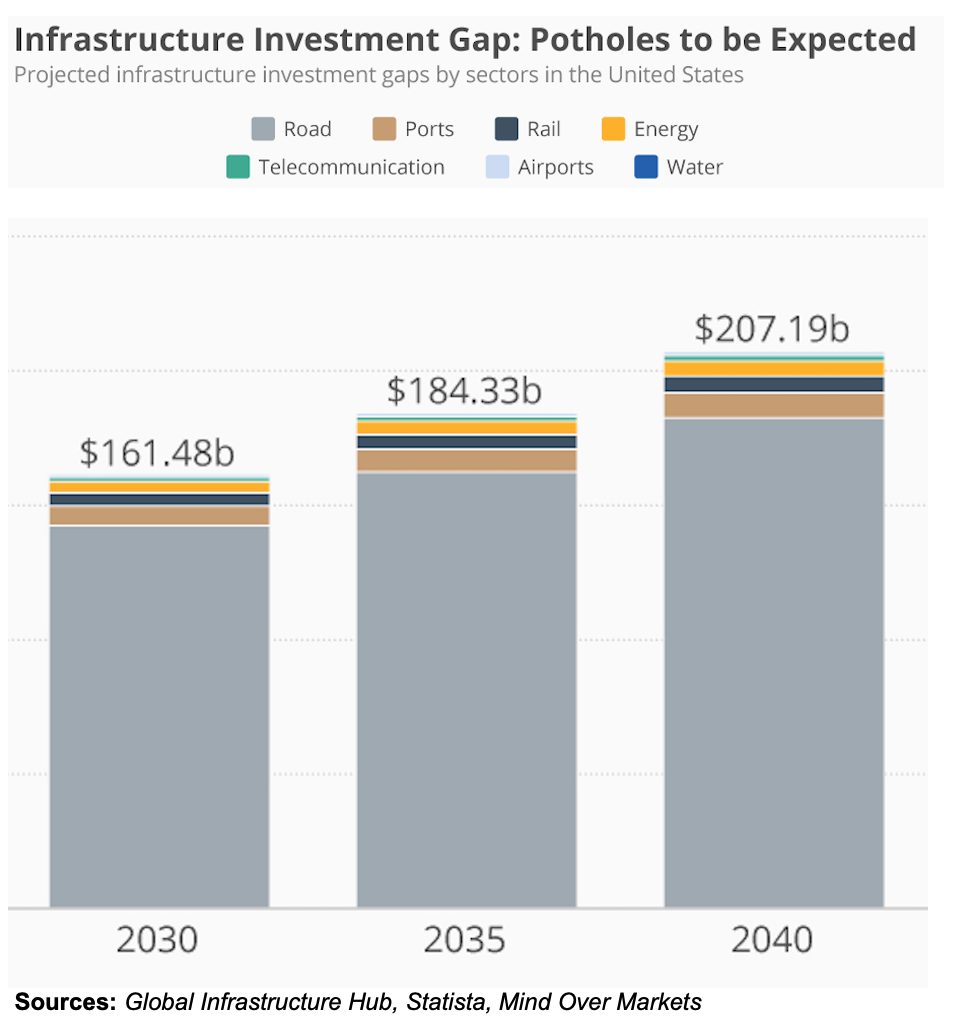 As you can see from the chart, the category of “road” requires the greatest allocation of funds. Road construction is a politically popular endeavor in states throughout the country, which helps account for the infrastructure bill’s bipartisan support in both the House and Senate. Without Republican votes, the bill wouldn’t have passed.

In my March 12 article entitled Infrastructure: Your Bridge to Profits, I wrote:

“Infrastructure enjoys a bipartisan coalition of support, because it entails state and local spending that both red and blue states require. What’s more, the construction firms that will benefit hire lobbyists that influence both political parties…The odds are favorable that an infrastructure bill will become law this year.”

Without improvements in infrastructure, ambitious goals to boost domestic demand in emerging markets will be unsustainable. Infrastructure spending is particularly important for Asia, which is leading the charge this year and into 2022 on global economic growth.

The building blocks of wealth…

Now that Biden’s “Build Back Better” bill is on the verge of becoming law, many companies involved in infrastructure have seen their shares bid higher. There’s another way to play the trend…via commodities.

Commodities also make a classic hedge against inflation, which is getting hotter. For details about a little-known small-cap miner that’s uniquely positioned to prosper from the infrastructure boom, click here now.