Four months ago, I commented on the rapidly shifting market dynamics surrounding Facebook, recently renamed Meta Platforms (NSDQ: FB). As I noted then, “One reason why Facebook continues to thrive is that it has little direct competition.” I further opined, “I think that is about to change.”

As an example, I identified Nextdoor (NYSE: KIND) as the type of social networking platform that could take market share away from Facebook. As its stock market symbol implies, Nextdoor is meant to be a forum where users can exchange positive thoughts for constructive change.

I closed that article by recommending shares of Khosla Ventures Acquisition Co. II (NSDQ: KVSB). KVSB is a special purpose acquisition company (SPAC) that was set to acquire Nextdoor. At that time, KVSB was trading near $11 after going public at $10 in March.

I hope you took my advice. That transaction was consummated on November 8, at which time KIND quickly ran up above $18. I bought KIND in my own account and was tempted to sell it last week when my gain approached 70%. But since I believe Nextdoor could go considerably higher, I decided to hang onto it despite its recent pullback.

At the same time Nextdoor was soaring, Facebook/Meta was moving in the opposite direction. After hitting an all-time high above $384 on September 1, FB beat a hasty retreat below $330 last week. 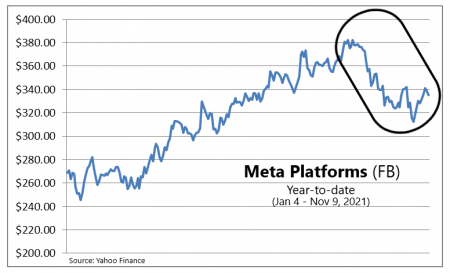 That decline was partly due to Meta’s fiscal 2021 Q3 results released on October 25. During the quarter, advertising revenue jumped 33% despite only a 6% gain in the number of daily average users (DAUs).

To remain on a high growth path, Facebook must find a way to expand its user base. The company’s controversial founder and CEO, Mark Zuckerberg, commented: “I’m excited about our roadmap, especially around creators, commerce and helping to build the metaverse.”

It is that last statement that could prove to be either Facebook’s salvation or undoing. A press release from the company states that the metaverse “will let you share immersive experiences with other people even when you can’t be together — and do things together you couldn’t do in the physical world.”

In that regard, Meta has a leg up on Nextdoor. As much as I may want to interact with my neighbors on the Nextdoor platform, I don’t think I’ll ever want to engage with them in an augmented reality environment.

On the other hand, I’m not so sure that a lot of Facebook’s DAUs will want to do that with their friends, either. According to Statista, 21% of Facebook’s users are age 24 and younger. Another 26% are 25 to 34.

That means more than half of Facebook DAUs are age 35 and older. That’s when most folks reach the prime earning years of their lives, which makes them the most desirable customers for the ads that sustain Facebook. However, that’s also when a lot of people are busy raising children and don’t have as much time to engage in frivolous activities in the metaverse.

If you want to invest in the growth of the metaverse, I believe there are better ways than owning FB. And since the metaverse is in its nascent stage, it probably makes sense to buy the entire space instead of one or two companies that may or may not fully participate in its growth.

To that end, the Roundhill Ball Metaverse ETF (META) was launched on June 30 “to offer investors exposure to the Metaverse by providing investment results that closely correspond, before fees and expenses, to the performance of the Ball Metaverse Index.”

The fund also owns shares of smartphone maker Apple (NSDQ: AAPL), entertainment conglomerate Walt Disney (NYSE: DIS), and cryptocurrency processor Coinbase Global (NSDQ: COIN). Apparently, you will be able to access the metaverse with your phone and pay for the games you play on it with Bitcoin and other cryptocurrencies.

That is a far cry from Facebook’s origins as a social networking site. It is also a far cry from the type of investment strategy that I would suggest for anyone other than a pure speculator.

Instead, I prefer investment strategies that consistently deliver high returns regardless of what is trendy at the moment. And for that, you need look no further than my colleague, Jim Fink.

As chief investment strategist of our premium trading service Velocity Trader, Jim Fink has devised a methodology that makes money in up or down markets, in good times or bad.

Jim will soon take part in a special event that will show ordinary investors how to make massive investment gains within the next 12 months. Reserve your spot by clicking here.