There was a time when the presence of pot dealers was considered bad for neighborhoods. But nowadays, an increasing number of homeowners and realtors are welcoming marijuana purveyors with open arms.

According to a recent survey by real estate firm Redfin, a plurality of U.S. citizens prefer to live in states where marijuana is legal. The real estate industry is taking notice. As I explain below, we’re witnessing a remarkable trend: the presence of marijuana-related activity actually boosts real estate values.

The Redfin survey asked a host of questions of domicile preferences, on “hot button” topics ranging from abortion to sexual orientation to marijuana. Among those who recently moved to a new metro area, 46% said they’d rather reside somewhere marijuana is “fully legal,” compared to only 22% who want to live where cannabis prohibition was still in effect.

The share of those who like legalized jurisdictions includes more than one in 10 respondents (12%) who said they would only consider living in places where marijuana can be legally purchased. That compares to 10% who said they would rule out moving to areas that have ended criminalization.

Thirty-two percent of people taking the survey said they’re indifferent about the cannabis topic when it relates to choosing a place to live. The following chart tells the story: 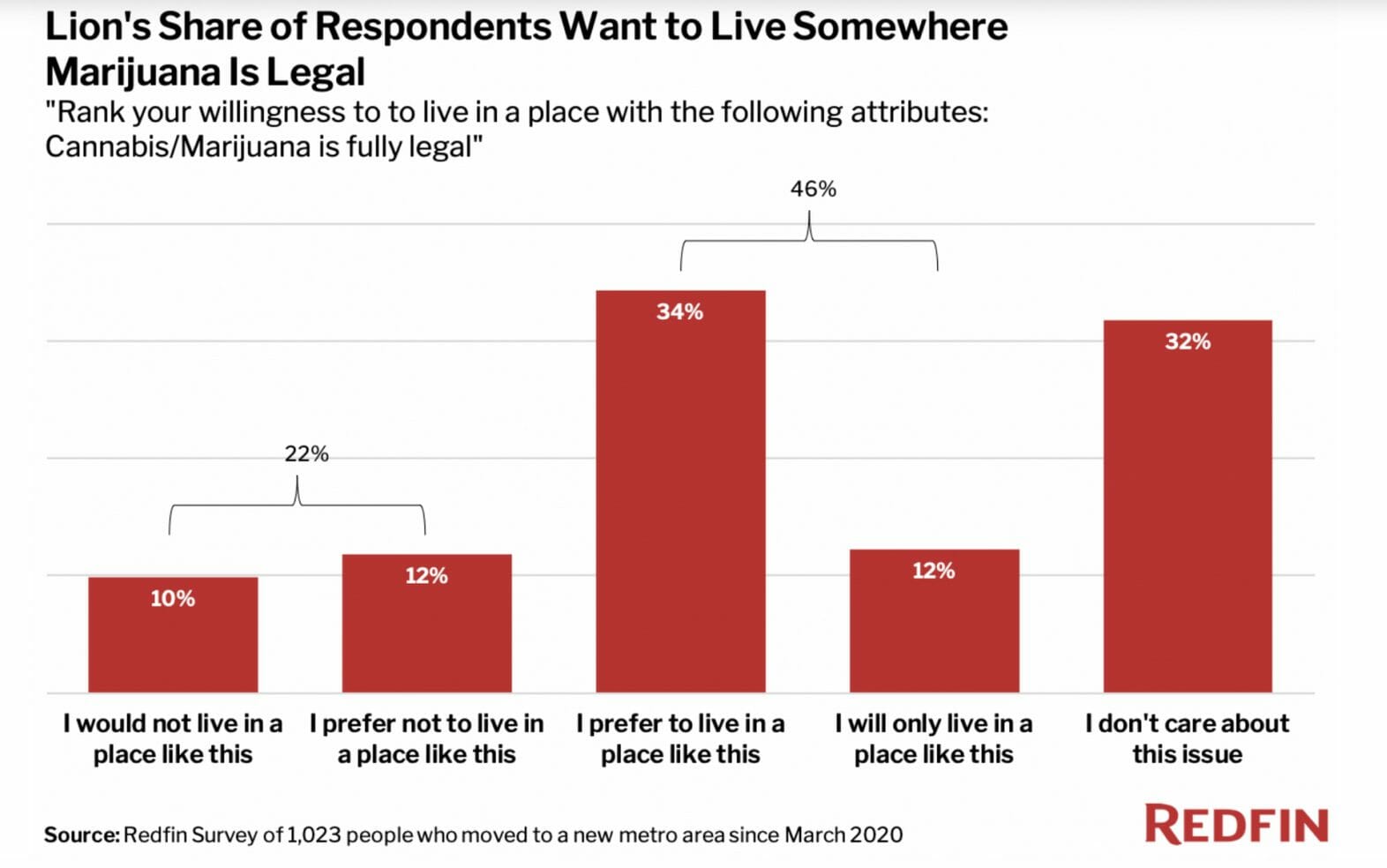 “People take the politics of a place into consideration when deciding where to move, but the truth of the matter is that other factors including housing affordability and access to jobs and schools take priority. Oftentimes this means someone will move from a blue state to a red state (or vice versa), but choose a home in a neighborhood where most people hold the same political views as they do. Austin—a liberal Texas enclave that’s attracting scores of left-leaning folks from pricier coastal cities—is just one example.”

The nexus of real estate and marijuana…

The legalization of marijuana is creating a “green rush” in the real estate industry. An influx of well-funded ganja-preneurs is revitalizing scores of local communities around the country, creating new jobs and lifting residential and commercial real estate prices. Gentrification increasingly includes a marijuana component, replete with edible boutiques, cannabis cafes and vaping parlors.

Investors are buying warehouse, factory and retail space in states that have legalized marijuana, according to recent research from the National Association of Realtors (NAR). Many of these spaces were rendered empty (and affordable) by pandemic-caused bankruptcies.

NAR found that in states where medical and recreational marijuana use is legal, 35% to 36% of its members had seen increased demand in warehouses, 23% in storefronts, and 18% to 28% in land.

NAR also found that 29% of commercial members in states that legalized recreational marijuana reported an increase in property purchasing over leasing.

Seasoned realtors are reporting an explosion in marijuana-oriented real estate deals, which is occurring in conjunction with venture capital-fueled expansion among canna-businesses.

From coast to coast, pot is a job-generating machine. Marijuana is putting people to work, in biotechnology labs, on farms, behind the counters in dispensary stores and paraphernalia shops, in agricultural science, and a host of other niches.

As the number of marijuana sector jobs grows, politicians are further motivated to push for legalization. Marijuana is becoming entrenched as a mainstream business, with more and more families across the country depending on Mary Jane for a paycheck. And politicians are getting addicted to the state and local tax revenue, too.

For our latest report on the best investment opportunities in cannabis, click here.