The title became a lasting catchphrase to describe a particularly difficult question or dilemma. For investors, the $64K question right now is: how “sticky” is high inflation? 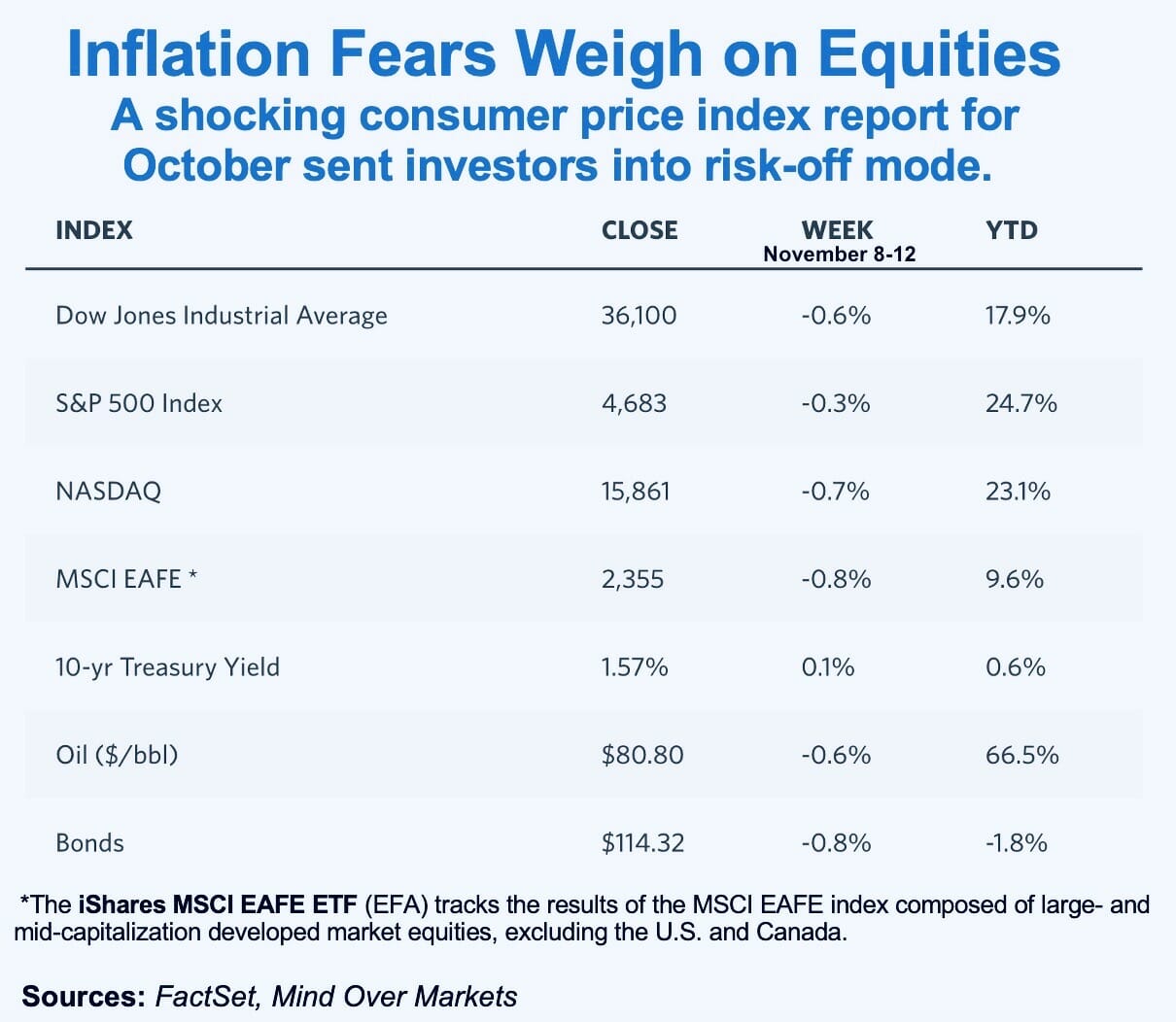 But growth is begetting inflation. The U.S. Bureau of Labor Statistics (BLS) reported last Tuesday that the producer price index, which measures wholesale prices, rose 0.6% in October, translating into a year-over-year increase of 8.6%. That’s the highest rate of increase in 11 years.

The BLS also reported Wednesday that inflation, as measured by the consumer price index (CPI) for all urban consumers in the U.S., soared to 6.2% on a year-over-year basis in October from 5.4% in September. This reading far exceeds the consensus expectation of 5.3% and represents the largest annual increase in more than 30 years.

The annual core CPI, which excludes volatile food and energy prices, rose to 4.6% in the same period, compared to the expectation of 4%. On a monthly basis, the CPI and the core CPI came in at 0.9% and 0.6%, respectively.

Inflation has remained elevated (with core CPI above 2.0%) since April 2021, when the economy started to re-open and vaccinations gained traction. Will inflation continue to run hot for a prolonged period, or will it eventually ease?

Don’t lose sight of the abnormally low baseline. In 2020, consumer prices were in a slump because of pandemic-induced economic damage. That said, the latest jump in consumer prices is more than just a statistical blip. There’s no denying that inflation needs to be taken seriously (see chart). 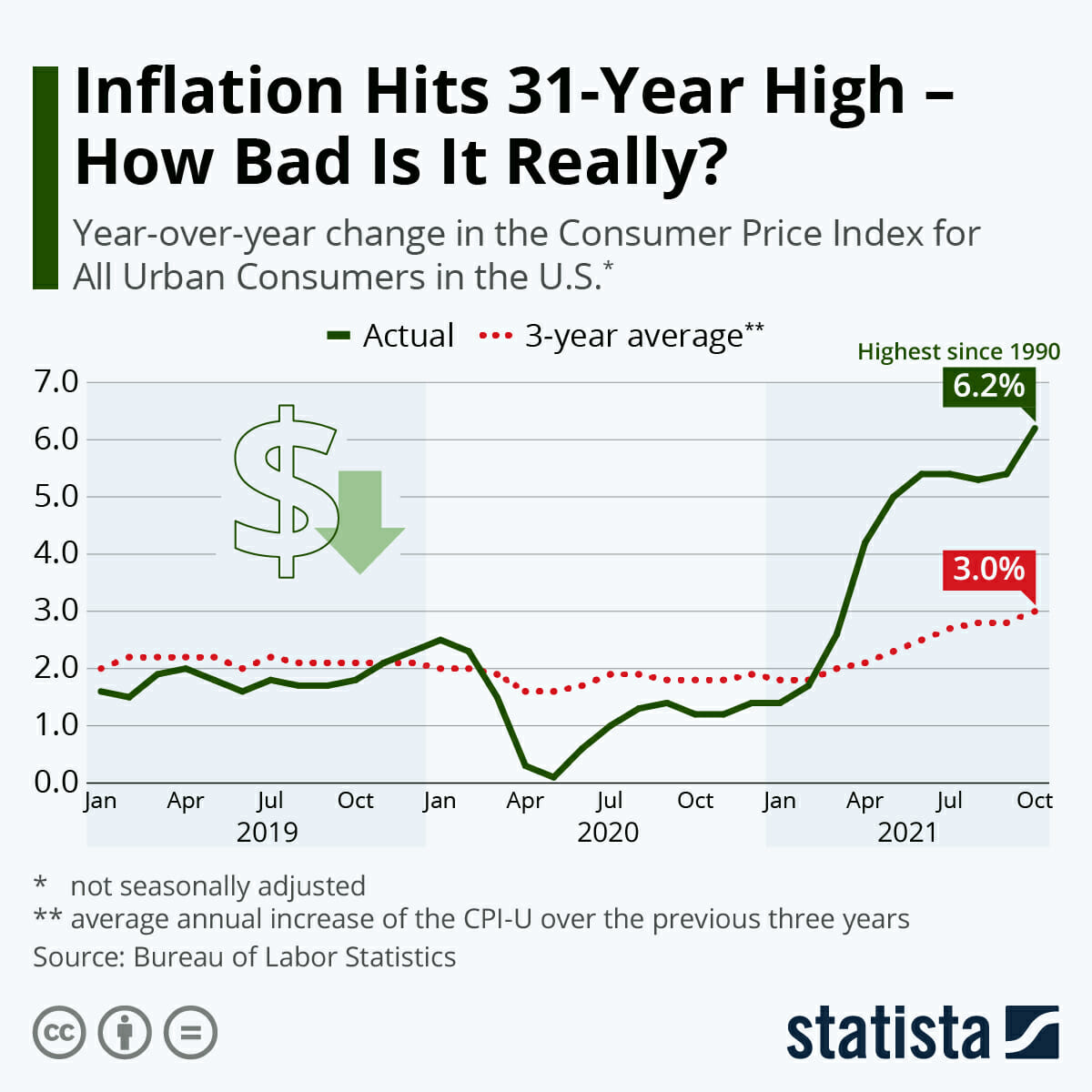 But mitigating factors are at work. Current inflation is largely driven by strong demand that’s colliding with insufficient supply. Many economists expect these imbalances to moderate in early 2022, as COVID rates continue falling and bottlenecks ease.

There’s a sharp partisan divide playing out in the media over rising inflation. But contrary to the bloviating of pseudo-economists on cable news, the latest spike in inflation doesn’t presage a return to 1970s-style stagflation.

There’s historical precedent for today’s inflation to be transitory. Notably, the high inflation of 1946-1948, caused by the economic dislocations of World War II, had substantially retreated by the end of 1948 as the world re-calibrated to peacetime. The traumas of COVID resemble those of a world war.

Regardless, you should position your portfolio for an inflationary environment. Whatever its rate of acceleration, inflation is indeed rising and exceeds the Federal Reserve’s target of 2%.

In recent articles, I’ve been recommending hedges that should not only protect your assets from inflation but also offer the opportunity for capital appreciation.

In the meantime, key reports are scheduled for release this week that will shed clarity on economic conditions: retail sales and industrial production (Tuesday); housing starts (Wednesday); and initial jobless claims and leading economic indicators (Thursday).

Editor’s Note: I’ve just made an essentially bullish argument, but maybe you’re looking for an investment method that reaps outsized gains with reduced risks. That’s where my colleague Jim Fink comes in.

As chief investment strategist of Velocity Trader, Jim Fink has devised a methodology that makes money in up or down markets. Jim will soon take part in a special event that will reveal his secrets for market-beating gains. Secure your spot here.