I first wrote about exercise bike manufacturer Peloton Interactive (NSDQ: PTON) in June 2020. At that time, its share price had just crested above $50 after dipping below $20 only three months earlier.

The reason for Peloton’s newfound popularity was the coronavirus pandemic. With gyms closed and everyone stuck inside, exercise bikes were high in demand.

I wrote then, “As much as I’d like to believe America has caught a new fitness bug, the cynic in me suspects that is not the case.” I went on to predict, “you will be able to buy a lightly used Peloton pretty cheap next year.”

I turned out to be correct about that expectation (more about that in a moment). However, I was wrong in believing that PTON would not appreciate much more.

Just seven months later, PTON was trading above $160 despite the public knowledge that successful COVID-19 vaccines were on the way. If successful, those vaccines would allow gyms to reopen.

Unfortunately for Peloton, that’s exactly what happened. When I last wrote about the company six months ago, PTON was trading near $90.

I wasn’t sure which direction PTON was headed next. However, I felt certain that it was going to make a big move one way or the other. For that reason, I recommended an options strategy known as a “long straddle” that entails buying a call option and a put option with the same strike price and expiration price.

For that trade to be profitable, PTON would have to move at least 30% in one direction or the other from the options’ $90 strike price. And it would have to do that before the options expired on September 17.

Stick in the Spokes

Just seven weeks later, PTON traded above $129 to make that trade quite profitable. The call option we bought for $13 could be sold for close to $50. That is nearly double what we paid for both options when we created the straddle.

The put option we also bought for $13 would go on to expire with no value. However, we came close to making money on that half of the straddle, too.

By the end of September, PTON had fallen below $90. It traded in a narrow range throughout October while Wall Street waited to see how the company’s current quarter turned out.

After the stock market closed on November 4, Peloton released its fiscal 2022 Q1 results that shocked the market. Sales came in much lower than expected and the company reduced its guidance for the remainder of the year.

The following morning, PTON lost more than a third of its value to trade below $56. One week later, it closed beneath $50 for the first time since I first wrote about it seventeen months prior. 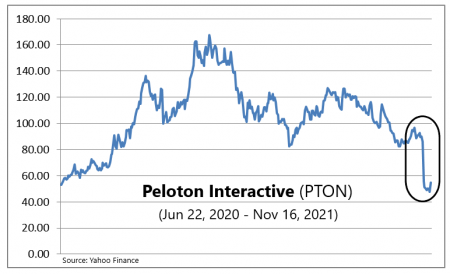 I expected Peloton to be volatile this year. But even I am amazed at the startling change in direction over such a short period of time. Surely, the analysts that follow Peloton knew that demand for its high-priced exercise bikes would sag as gyms reopened.

Last week, I checked the local listings for used Peloton bikes on Craigslist. There were two dozen bikes for sale, many of them priced at less than half of what they cost new. Extrapolate that trend across the entire country and Peloton is essentially competing with itself for business.

Because revenue came up far short of expectations, Peloton announced on November 16 that it will sell up to $1 billion of its Class A common stock in a secondary offering. If successful, the offering will dilute existing shareholders’ equity in the company by about 6%.

Normally, that type of news would send a stock lower. But this is 2021 when almost nothing about the stock market is normal. That day, PTON jumped more than 15% to close above $54. However, two days later it was back below $50.

Once again, I don’t know which way PTON is headed next but I think it will make a big move one way or the other. And somewhat surprisingly, it appears that the options market has not learned its lesson when it comes to betting on Pelton.

Last Tuesday when PTON closed near $55, the call and put option that expires on March 18 at that strike price could each be bought for $8.50. That means PTON would once again have to deviate at least 30% from its current share price for that straddle to be profitable, just like six months ago.

I think that is likely to happen. The downside argument is bolstered by the company’s poor recent results and the increasing likelihood that COVID-19 is close to being contained in this country. The upside argument is that things can’t get much worse for Peloton so any good news could send the stock soaring.

However, I’ve learned not to tempt fate when it comes to betting on the same stock to repeat itself. Nothing ever happens the same way twice, especially on Wall Street.

Instead, I prefer using a proven system for identifying the next big options trade winner. And for that, I need look no further than my colleague, Jim Fink.

As chief investment strategist of Velocity Trader, Jim Fink has devised trading methodologies that reap market-beating gains, regardless of economic ups and downs or the path of COVID infections.

Jim has put together a new presentation that shows smart investors how to make massive investment gains in a short amount of time. Click here now for access.