Oil and EVs: Clash of the Energy Titans

Like Ernest Hemingway’s famous description of bankruptcy, technological change can happen slowly at first…and then all at once.

Consider electric vehicles (EVs). They’ve been around since the 19th century and first got mainstream attention during the oil shocks of the 1970s. The pivotal event occurred in 2003 with the formation of EV-maker Tesla (NSDQ: TSLA).

We now stand at an inflection point for EVs. The transition away from the internal combustion engine and toward EVs is rapidly accelerating, and it’s one of the biggest investment themes of our lifetimes. The combination of climate change and surging crude oil prices is giving the trend greater urgency.

Below, I’ll steer you toward the shrewdest way to play the EV phenomenon. But first, let’s look at recent market action.

Investors were cheered by President Biden’s announcement Tuesday that the U.S. would release 50 million barrels of crude oil from the nation’s Strategic Petroleum Reserve to lower energy costs amid a spike in gasoline prices and soaring inflation.

A tailwind, though, is the corporate earnings picture. For Q3 2021, the blended earnings growth rate for the S&P 500 is nearly 40%. Another bullish factor is greater infrastructure spending, which in turn is a plus for clean energy and EVs.

President Biden’s “Build Back Better” plan, which is now the law of the land, provides $7.5 billion for zero- and low-emission vehicles. Another $7.5 billion would go to constructing a nationwide network of plug-in EV charging stations. The year-long surge in crude prices is compelling justification for the policy shift away from oil (see chart): 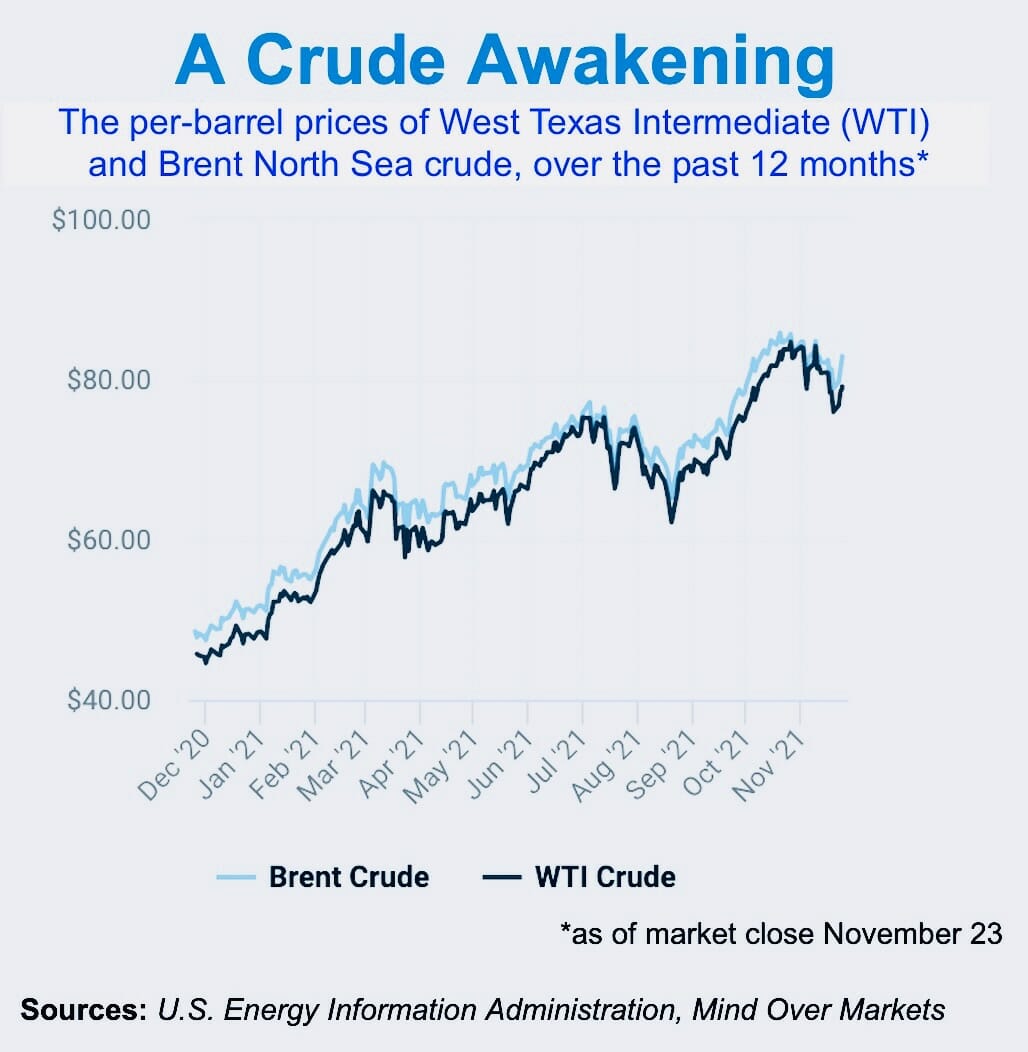 Tesla is one of the most hyped “story stocks” on Wall Street. You can’t turn on CNBC, Fox Business News, Bloomberg, or any other financial news channel without hearing the talking heads chatter away about Tesla.

As for Musk, he’s a fixture in our celebrity-obsessed culture. Musk’s recent antics include guest hosting Saturday Night Live, making surprise appearances on TV sit-coms, ardently promoting dubious cryptocurrencies, and getting into hot water with the SEC for market-moving tweets. For me, Elon Musk jumped the shark when he smoked a fat marijuana joint in public during a podcast interview.

EVs represent a monumental innovation, but a corporate CEO who plays jester doesn’t seem to be in the best interests of shareholders.

Another ballyhooed EV maker is Rivian (NSDQ: RIVN), the shares of which have been on a roller coaster lately. Frankly, the share prices of Tesla, Rivian and their peers are grossly overvalued. The smart money isn’t limiting itself to the mainstream EV stocks everyone is raving about. They’re quietly diving into what savvy investors call “the EV shadow sector.”

However, most folks won’t hear a peep about this investment story until it hits the financial press. And by then it’ll be too late.

Want to discover the best way to profit from the EV revolution? It involves a commodity that’s the essential ingredient in EV batteries. I consider this raw material to be the new gasoline of the 21st century. Click here to learn more.