Omicron and Your Portfolio: Moves to Make Now

In the early days of my career, when I was a daily newspaper reporter, the news was delivered to readers on actual paper. We had a slogan in the newsroom: Today’s news is tomorrow’s fishwrap.

COVID’s Omicron mutation has emerged in recent days as the biggest risk to financial markets. Perhaps tomorrow, news of Omicron will be fishwrap. But as of this writing, it’s the crisis du jour.

The World Health Organization (WHO) announced on Monday that the variant is likely to quickly spread and poses a “very high” global risk. The WHO warned of “severe consequences” for some areas.

Initial news of the Omicron outbreak sent global equities plunging last Friday, with major indices in the red for the week.

As the following chart shows, cruise lines were clobbered the hardest by the Omicron-induced sell-off, with the three largest operators racking up huge losses. Airlines and online booking agencies also experienced declines that far outpaced the downward trend of the broader market: 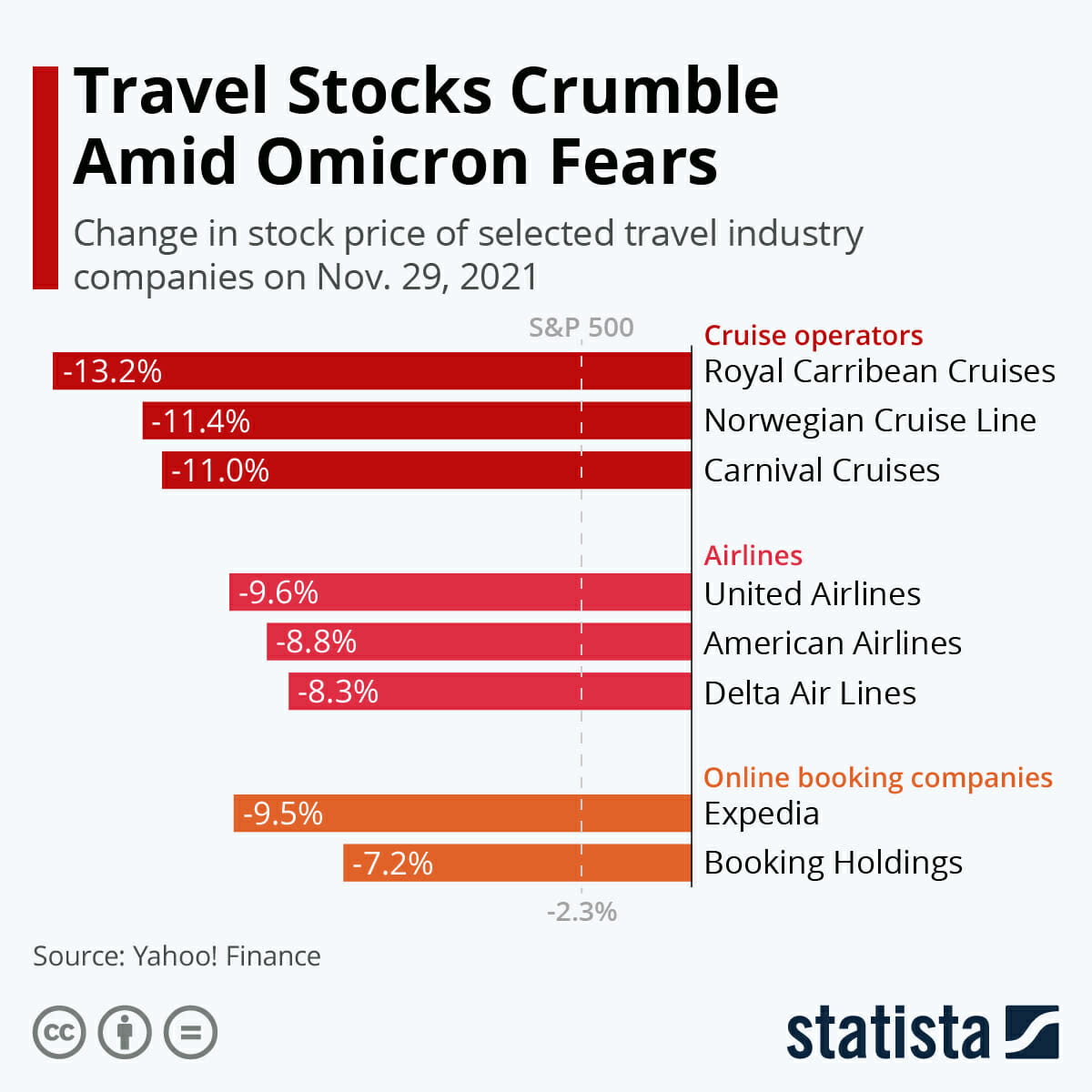 The relief didn’t last. After the opening bell Tuesday, U.S. stocks were sharply lower in early morning trading, as investors went back to fretting about the variant. Overseas indices were slumping as well.

Federal Reserve Chair Jerome Powell stated Tuesday that Omicron poses “downside risks” to the economy. Scientists are racing to determine the variant’s degree of contagiousness and pharmaceutical makers are pulling out the stops to develop a vaccine against it.

Meanwhile, our elected officials aren’t exactly inspiring confidence. Congress this week returned to work in Washington, to face a slew of challenges. The two political parties are grappling with strict deadlines and of course, they’re at each other’s throats. Lawmakers must authorize major defense programs, take up President Biden’s economic agenda, and prevent a government shutdown.

Yep, once again, a government shutdown looms. A short-term fiscal measure that funds the federal government is scheduled to expire Friday, which means both chambers of Congress must move quickly to implement another plan to raise the debt ceiling. The brinkmanship and name-calling already have begun.

Haven’t we seen this movie before? The showdown over the shutdown resembles a version of High Noon, starring the Marx Brothers. However, I suspect a government shutdown will be averted. Wall Street and the business community don’t want the chaos of a shutdown, which is why it’s unlikely to happen.

At the same time, lawmakers are bickering about Omicron and how the public health system should respond. These days on Capitol Hill, grandstanding has supplanted the art of legislating.

But don’t get rattled by the white noise. Pick investments according to their fundamentals and long-term prospects. Never dump stocks in a panic.

A time-tested safe haven during uncertain times is the utilities sector. The growing need for utilities will never wane, regardless of the unpredictable path of the pandemic.

In these fraught market conditions, when the daily news sometimes seems like a nightmare, utilities are a sleep-well-at-night sector. For our “dividend map” of the highest-quality utilities stocks, click here.

Another way to protect your wealth (and still reap gains) is to tap into megatrends that will unfold for years to come. One such trend is the global transition toward electric vehicles (EVs).

But the smart money isn’t limiting itself to the mainstream EV stocks everyone is raving about. They’re quietly diving into what savvy investors call “the EV shadow sector.” Click here to learn more.

Also consider stop-loss orders. One of the most widely used devices for limiting the level of loss from a dropping stock is to place a stop-loss order with your broker. Using this stop order, the trader will pre-set the value based on the maximum loss the investor is willing to tolerate.

If the last price drops below this fixed value, the stop loss automatically becomes a market order and gets triggered. As soon as the price falls below the stop level, the position is closed at the current market price, which prevents any additional losses.

Questions about crisis investing? Send me an email: mailbag@investingdaily.com.

John Persinos is the editorial director of Investing Daily. Subscribe to his video channel.