Far Out Vacations: The Rise of Psychedelic Tourism

“Save up all your bread and fly Translove Airways to San Francisco U.S.A.
Then maybe you’ll understand the song; it will be worth it.
If not for the sake of this song but for the sake of your own peace of mind.”

Those lyrics are from San Franciscan Nights (1967), performed by Eric Burdon and The Animals. It’s now the year 2021, and many tourists are indeed saving up all their bread, for just such a trip.

During the counterculture of the 1960s, dealers who provided mind-bending drugs such as LSD were euphemistically called “travel agents.” It’s no longer a euphemism. Travel agents that specialize in organizing psychedelic retreats, to such exotic locales as Jamaica, Costa Rica, and Mexico, are sprouting up like mushrooms (pun intended).

Psychedelic tourism, dabbed with the patina of the wellness industry, is a booming business. If you want your share of the investment spoils from this trend, you need to be proactive. Below, I steer you in the direction of the most profitable opportunities.

According to a report released in October by Global Industry Analysts, the psychedelic drugs market is set to reach a value of $6.3 billion in 2026, up from $3.2 billion in 2021. That’s a compound annual growth rate of 14.5% during the five-year forecast period.

The research firm estimates that treatments for depression will comprise the largest chunk of the disease indication segment with more than 40% market share by the end of 2021. The World Health Organization estimates that 264 million people around the world suffer from depression, often chronic and resistant to treatment. Psychedelics, in conjunction with talk therapy, are a proven remedy.

But emerging as a significant cottage industry is psychedelic-enhanced recreational tourism.

As psychedelics are increasingly legalized in the U.S. and around the world, they’re invading the daily lives of consumers. We’re seeing a proliferation of shaman-led tours, five-star resorts, and best-selling travel guides all predicated on psychedelics as a tourist activity. It’s a reminder that capitalism is ingenious at co-opting and monetizing every conceivable experience.

Micro-dosing business trips have become all the rage, too. Gone are the days of Don Draper drinking martinis. Now, executives are dropping acid on sales trips and corporate retreats.

Speaking for myself, I doubt my publisher would ever approve LSD as an item on my expense account. But from Manhattan to Silicon Valley and all points in-between, top managers are turning on, claiming that psychedelics enhance creativity and “outside-the-box” thinking.

The rising trend of psychedelic-infused vacations mirrors what started earlier in the marijuana industry: the emergence of a sub-industry that caters to pot tourists. Canada, in particular, has become home to a growing number of “bud-and-breakfasts.” The country nationally legalized marijuana in 2018 and it’s considered a pioneer in weed normalization.

The marijuana tourism industry also is thriving in states such as Colorado, the second-largest marijuana market in the U.S. and a state already known for spectacular scenery and easy-going lifestyles.

Read This Story: Trip Your Way to Better Health

According to a recent survey by the National Academy of Sciences, the use of psychedelics is increasingly common among the general U.S. population (see chart). 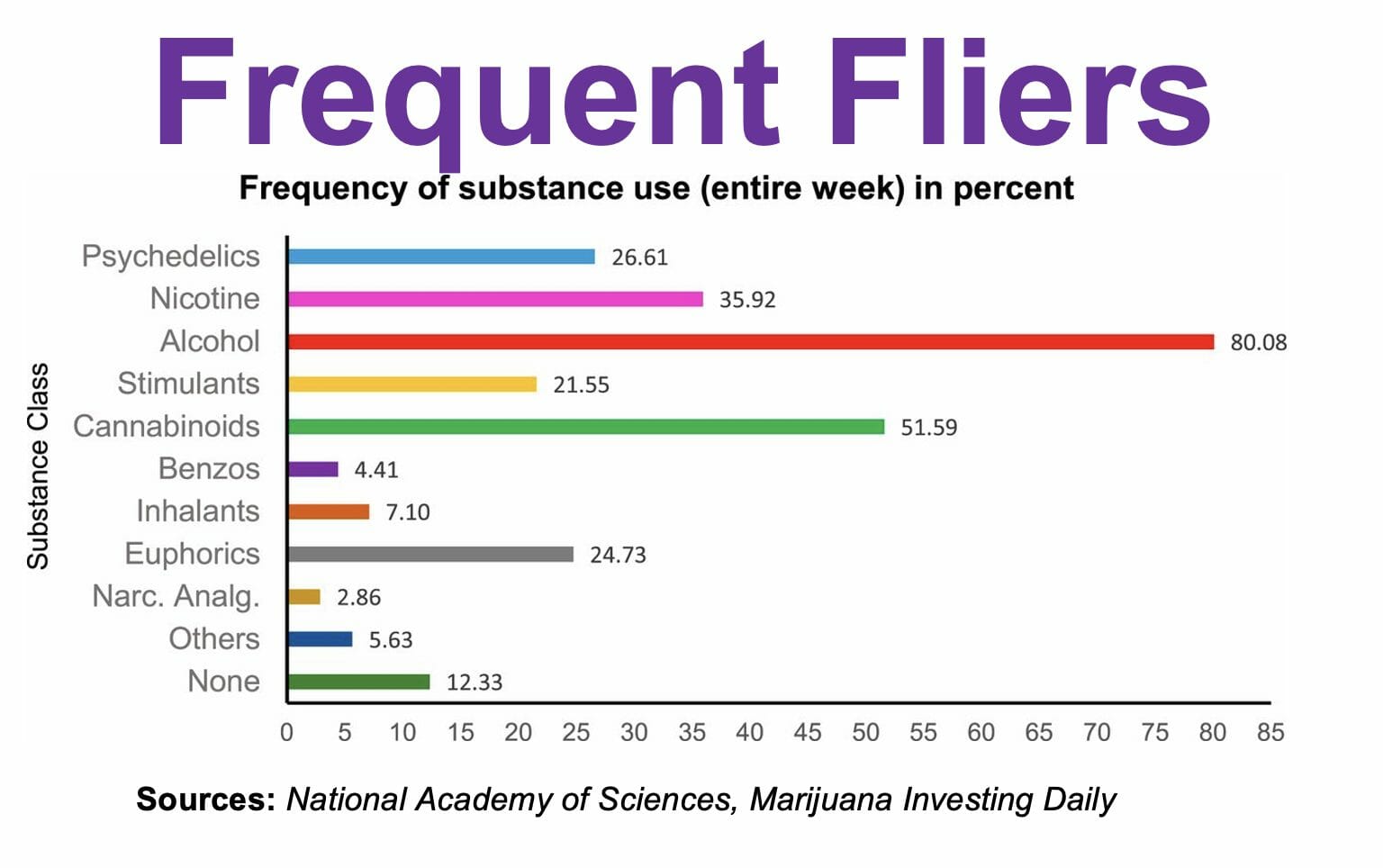 The adherents of psychedelics argue that when self-reflective thinking turns into a well-worn rut, the ego becomes oppressive. Depression can set it. That’s where psychedelic compounds can help. By muting repetitive negative thoughts that reinforce depression, these compounds can loosen the ego’s grip on the mind and facilitate uninhibited free association that leads to new insights.

So who needs a trip to Disneyland, when you can plumb the depths of your unconscious mind, in the comforts of a luxury seaside cabana? All-inclusive buffet thrown in.

The coronavirus pandemic and its succession of mutations such as Delta and Omicron have put millions of people on edge and in need of stress relief. Hence soaring sales of marijuana and psychedelics since early 2020, when the COVID outbreak first emerged.

Marijuana stocks have been surging in 2021 and they’re poised for another banner year in 2022. Cannabis companies that are flush with cash are eyeing psychedelics as strategic investments.

I’m monitoring the nascent movement to bring LSD, mushrooms and similar substances into the mainstream. In the meantime, we’ve pinpointed the best cannabis investments available. Click here for our free report.