But in the red-hot cannabis merger and acquisition (M&A) realm, these dealmakers are increasingly likely to be wealthy hipsters from major pot markets like Southern California.

The marijuana industry is undergoing a tsunami of M&As. Marijuana equities have been soaring in price this year, and nouveau riche ganjapreneurs are putting that cash to work, by striking deals.

This rapid consolidation is melding blue-chip culture with the green rush. It’s an accelerating trend in the world of business and one that’s minting new millionaires at a rapid pace.

Lower Manhattan is shaking hands with Laurel Canyon. Below, I’ll show you how to get your piece of the action.

According to a new report released December 6 by the research firm New Frontier Data, the first half of 2021 witnessed a flurry of record-breaking marijuana deals in every industry sub-sector. Transactions worth $5.5 billion involving U.S.-based companies have closed so far in 2021, versus about $3 billion last year and $3.7 billion in 2019.

The surge in M&A activity has been driven by the search of cannabusinesses for new markets, expanded production capabilities, operational efficiencies, and intellectual property (see the following chart). 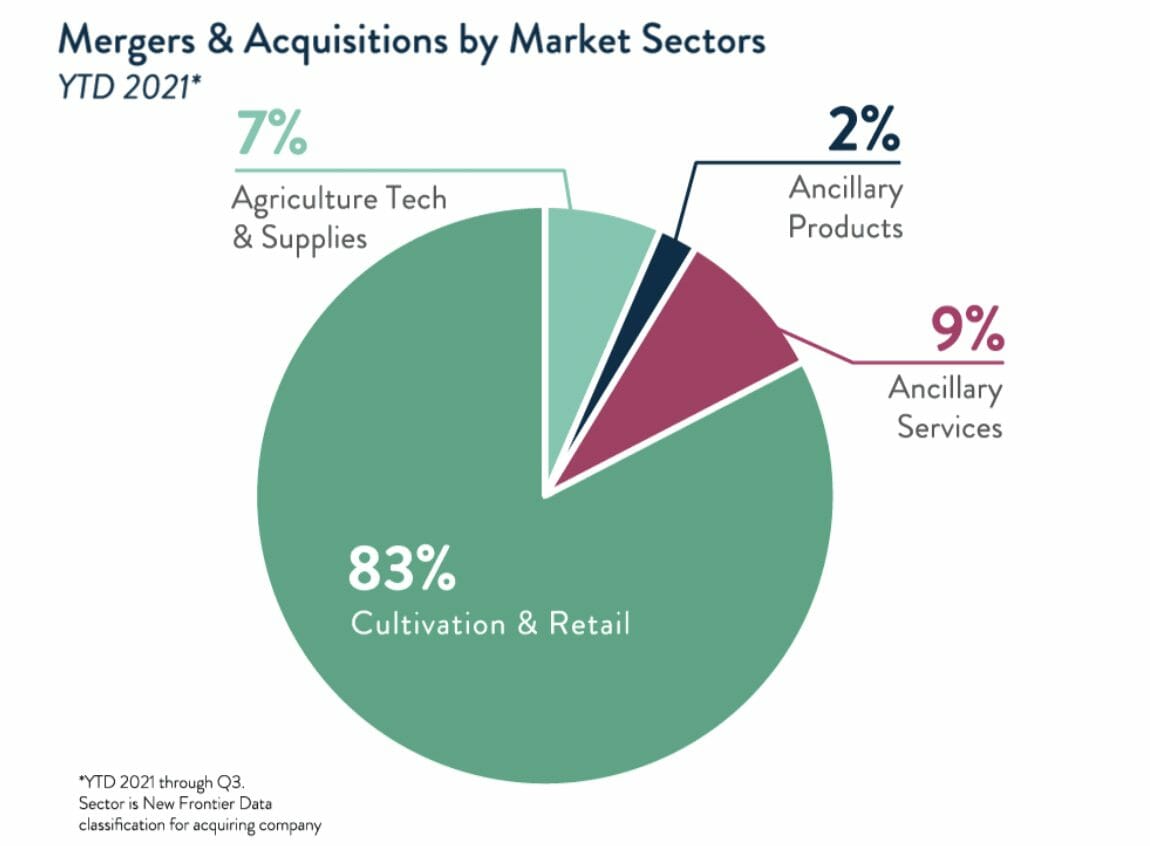 The majority of this M&A activity has occurred within the cultivation and retail space, as companies seek to establish footholds in newly legalized markets.

Nearly all of the acquiring companies in the year’s 10 largest-value cannabis M&A deals involved “plant-touching” operators. The United States and Canada comprise the lion’s share of M&As, with the U.S. West Coast a locus of activity.

But it’s a global phenomenon. According to a separate study by New Frontier Data, Global Cannabis Report: Growth & Trends Through 2025, the number of countries with some form of legalized cannabis has increased from 50 in 2019 to 70 today.

North America dominates the global marijuana economy, comprising 97% of legal cannabis sales in 2020. Robust growth in the two largest and most dominant markets (the U.S. and Canada) is projected to push combined legal sales in the region to an estimated $51 billion by 2025.

Increased M&A activity, in a wide variety of industries and not just cannabis, is shaping up to be a major investment theme for the rest of 2021 and into 2022. History shows that shareholders typically benefit from M&As.

What’s more, firms are using M&A transactions as a way to counterbalance uncertainties, such as rising inflation, imminent Federal Reserve tapering, and a lingering pandemic.

Robust M&A reflects investor confidence. Corporate management and their deal sponsors feel good about the current economic and financial environment, prompting them to aggressively pursue new opportunities that better position them for the post-COVID world.

It also helps that the markets are awash in liquidity, thanks to the Fed. To be sure, the U.S. central bank is getting more hawkish, but interest rates are still scraping historic lows, which provides cheap debt-financing for aspiring acquirers.

Many cannabis acquisition targets are smaller bargain-priced companies that can provide the acquiring company with new capabilities and markets. The most coveted marijuana brands enjoy an affinity with local consumers. Big companies with deep pockets can simply buy new brands and innovations, by scooping up their smaller rivals.

This pursuit of innovation that’s integrated via M&A activity (a process known as “innogration”) has helped propel small-cap marijuana companies higher this year. Small caps also tend to thrive when investors are optimistic about economic growth.

My investment team has pinpointed cannabis plays that are positioned to thrive in the next wave of mega-deals. If you’re looking for a future cannabis windfall, click here for details.