Targeting the Next Great Growth Stock

I started out as a stockbroker nearly 40 years ago. Over that time, I’ve learned a lot of lessons. Among those, perhaps the most valuable one is also the most difficult to apply to investing, to wit: you never know where the next great growth stock will come from.

I was reminded of that aphorism last week while writing an update for Target (NYSE: TGT). Since adding it to the Personal Finance growth portfolio in April 2017, TGT has generated a total return (share price appreciation plus dividends paid) of 433% through the end of November.

Over that span, it has outperformed every one of the FAANG stocks. Among those, Apple (NSDQ: AAPL) has come the closest to matching Target with a total return of 373%. Just behind Apple is Netflix (NSDQ: NFLX) at 364%. 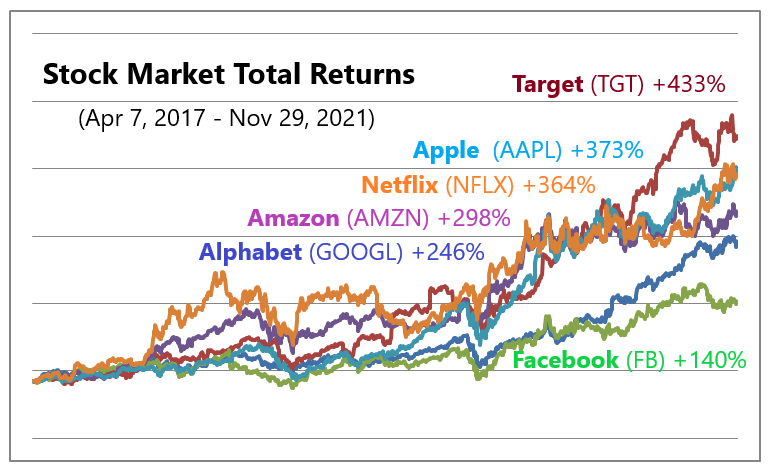 In part, Target’s relative outperformance since that date is due to its underperformance leading up to it. The company was generally regarded as future Amazon roadkill, along with many other big-box retailers.

I noted at that time, “Target’s strategy includes overhauling its stores to appeal to different shoppers. Half of the store will be designed to appeal to unhurried shoppers like my wife, while the other half will be for people in a rush who want to pick up online orders or groceries fast.”

Undervalued and Out of Favor

Of course, what I could not possibly anticipate at that time is the coronavirus pandemic and its effect on the retail sector. COVID has thrown us a lot of curve balls.

Watch This Video: The Omicron Conundrum

However, Target’s sizable investment in online merchandising and curbside pickup has paid off enormously since the onset of the pandemic nearly two years ago.

Reflecting on that unexpected turn of events got me to wondering what might be the next great growth stock. To my way of thinking, it must possess two critical traits:

That is the position that Target found itself in five years ago. The year before I added Target to our portfolio, the SPDR S&P Retail ETF (XRT) gained 3.3% while the SPDR S&P 500 ETF Trust (SPY) was up 12%.

That being the case, it makes sense to look for our next unexpected growth stock where nobody else is currently looking. One way to do that is to review sector performance to find areas of the stock market that are currently out of favor.

During the past year (through December 6), the worst-performing sector has been Consumer Staples with a gain of 9.2% compared to a 24.1% return on the S&P 500 Index. Within that sector, the Food Products and Beverages industries have delivered the lowest returns at 4.5% and 6.6%, respectively.

The problem is not that people are eating and drinking less than they used to. If anything, just the opposite has been the case during the pandemic.

However, rapidly rising commodity prices have squeezed operating margins for many of these businesses. For example, the global price of wheat increased 44% during the past year while the price of coffee jumped by 59%.

There are 30 stocks held by the Invesco Dynamic Food & Beverage ETF (PBJ). Somewhere in there may be our next great growth stock. Now comes the hard part: which one is it?

The fund’s top three holdings are General Mills (NYSE: GIS), PepsiCo (NYSE: PEP), and Hershey (NYSE: HSY). They are all widely followed on Wall Street so it is unlikely that any of them will catch the market by surprise.

The fund’s three smallest holdings are United Natural Foods (NYSE: UNFI), Bunge Ltd. (NYSE: BG), and US Foods (NYSE: USFD). I would also eliminate all of them since they have each already rallied strongly this year.

However, the fund’s fourth-smallest holding is Dole plc (NYSE: DOLE), which went public four months ago at an initial public offering (IPO) price of $16. Since then, its share price has meandered lower to close beneath $13 last week.

On December 3, Dole released its fiscal 2021 Q3 results. The company reported a 22.5% increase in pro-form adjusted and fully-diluted earning per share (EPS) compared to the same period last year.

That’s not surprising since raw food prices are on the rise. The price of wheat rose 44% during the past year while coffee has jumped 59%. Unlike most food products companies, Dole is a supplier and not a manufacturer so it benefits from higher commodity prices.

I doubt that Dole will perform as well as Target has over the past four years, but you never know. If nothing else, owning shares of Dole is one way to hedge against rising prices at the grocery store.

But if that is too speculative for you, I suggest using a proven system for identifying stock market winners. This system provides big gains regardless of how uncertainties such as the coronavirus or inflation play out. Click here for details.