Betting on Bitcoin as an Inflation Hedge

An old friend dropped by my house last weekend. We had not seen each other in 30 years, but it did not take long for us to fall back into familiar habits.

After catching up on how our lives have gone over the past three decades, the talk eventually turned to the future. We are both in our 60s now and look forward to letting our money work for us in retirement when the time comes.

The next day, I got the following message from him: “One other thing I wanted to ask you; what’s your take on cryptocurrencies like Bitcoin?”

Watch This Video: Musk, Dogecoin, and Other Tales from the Crypt

I get that question a lot these days. During the past year, the price of Bitcoin (BTC) has doubled, dropped in half, and then doubled again. Depending on your timing, you could have either made a fortune or lost a fortune betting on Bitcoin.

My response was simple and direct: “I don’t have a good answer to that question because I can’t figure out what factors drive demand for Bitcoin. There are also no performance metrics to benchmark it against. For those reasons, I do not have any idea which direction Bitcoin is headed next.”

The supply side of the equation for Bitcoin is clearly established. There will be 21 million coins by the time all of them have been released. Of those, approximately 19 million are already in circulation.

With only 2 million coins yet to be mined, some investors are stockpiling them. They don’t plan on spending them anytime soon. Instead, they are waiting to see if the paucity of new supply drives Bitcoin higher.

The other challenge I have with Bitcoin is that its value is not directly linked to anything. Unlike a fiat currency, such as the U.S. dollar, Bitcoin is not backed by a central bank of a sovereign nation. Nor is its value tied to the price of gold or any other tangible asset.

Those same statements could be made about common stock, but with one important difference. At least with stock, the company issuing those shares has a balance sheet that reflects the intrinsic value of the business.

That is why I do not recommend Bitcoin as an investment for most retirees. In addition to its inherent volatility, it pays no dividends nor generates any other form of financial benefit.

That said, I do like Bitcoin as an inflation hedge. Last year, the money supply in the United States that consists of cash and other forms of legal tender (M1) more than tripled. Shortly thereafter, Bitcoin skyrocketed in value. 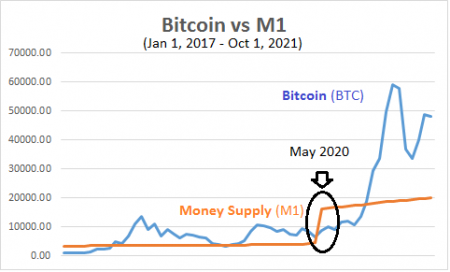 It’s no wonder that the growth rate of inflation has taken off at the same time. In November, the Consumer Price Index for All Urban Consumers (CPI-U) increased 6.8% over the previous year, its biggest 12 month increase since 1982.

Inflation is often defined as “too much money chasing too few goods.” That is exactly what is happening today. The amount of money in circulation is increasing while global supply chain bottlenecks are reducing the amount of goods available for purchase.

The main reason why the U.S. dollar has remained relatively strong is that the rest of the world isn’t doing much better. Europe is once again besieged by a new variant of COVID-19 while China is bogged down by high energy prices and a deteriorating real estate market.

Eventually, those conditions will reverse at which time the amount of M1 in the U.S. will start to matter. And the only way to rapidly reduce M1 is for the Federal Reserve to engage in quantitative tightening, which entails taking cash out of the economy.

By the time that happens, almost all of the Bitcoin that will ever be created will already be in circulation. In short, buying Bitcoin now is a bet that investors will flock to the cryptocurrency during the next stock market crash.

That may happen, or it may not for reasons we can’t begin to imagine. Regardless, that is not the type of investment strategy that is suitable for most retirees living on a fixed income.

Instead, I suggest a trading methodology that weathers current uncertainties and provides big gains, without the ups and downs associated with fad investments. Click here for details.