The use of famous (and infamous) names to market marijuana to average consumers has become all the rage.

Case in point: Hunter S. Thompson’s widow, Anita Thompson, claims to have devised a way to clone her late husband’s marijuana supply. She has held onto six strains from his personal reserve and plans to sell Gonzo-brand cannabis in states where the drug has been legalized.

Back in 1977, when I was an undergraduate at Boston University, I attended a campus lecture given by Hunter S. Thompson. He made prescient remarks about marijuana legalization.

The father of Gonzo journalism arrived late to the B.U. auditorium, wearing a flannel shirt, blue jeans, hiking boots, and (even though it was nighttime and indoors) aviator sunglasses. He sat in a metal folding chair on a bare stage, without a table and in front of a standing microphone. He gave no prepared remarks. He simply fielded questions, while munching on a cheeseburger and drinking from a bottle of Molson ale. He started the event by mocking us for buying tickets to see him.

When asked by a student in the audience about the War on Drugs and how long it would continue, Thompson gave an answer that I jotted down in a notebook that’s still in my possession. He said:

“Nixon’s War on Drugs represents that dark, corrupt and violent side of the American character that almost every country in the world has learned to fear and despise. One day, prohibition will end, and you’ll see society come to its senses and legalize drugs like marijuana.”

Back then, those words seemed crazy. But not today. In addition to Thompson’s widow, a growing number of famous folks are jumping aboard the marijuana bandwagon.

Martha Stewart and Snoop Dogg (an odd couple, for sure) have frequently appeared on television chat shows together, to discuss their respective marijuana ventures.

Marijuana: The State of the States

Let’s review the progress the U.S. has made toward realizing Hunter Thompson’s prophesy.

Marijuana remains banned on the federal level. As of December 2021, 18 states and Washington, D.C., had legalized marijuana for recreational usage; 12 through ballot initiatives, one through a legislatively referred constitutional amendment, and six through bills approved by state legislatures and signed by governors.

The following chart summarizes the state-by-state legal status of marijuana in the U.S., as of this writing: 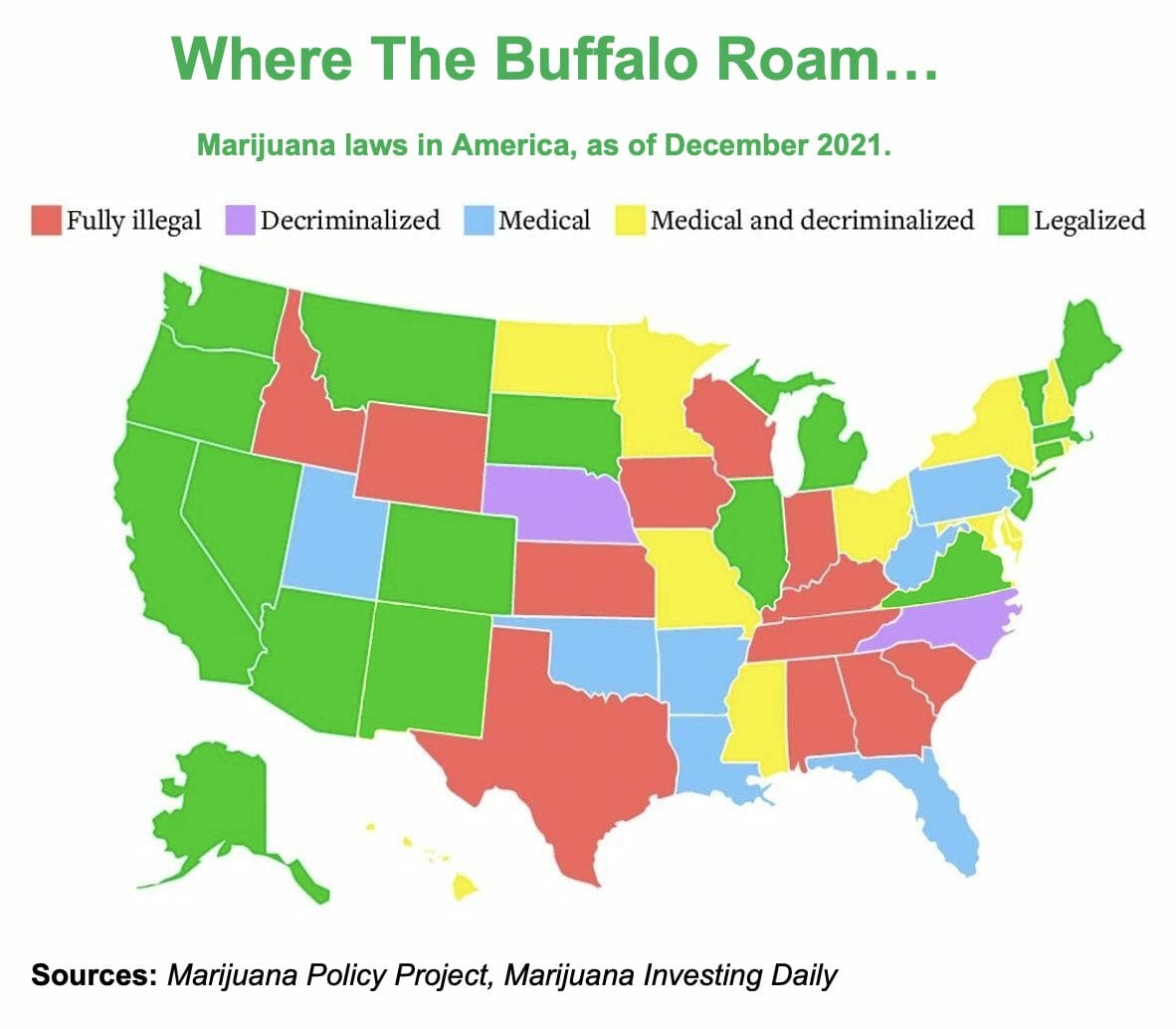 Various proposals to lift the federal ban on marijuana have passed the U.S. House and currently await action in the Senate.

Read This Story: Feds Further De-Escalate The War on Drugs

According to Grand View Research, the legal marijuana market is on track to be worth $70.6 billion globally by 2028. In the U.S., legal marijuana sales are projected to reach $24 billion in 2021 alone.

As marijuana increasingly goes mainstream, I’ve been following another trend of enormous importance for investors: the aggressive efforts of Big Tobacco to dominate the cannabis industry.

Faced with shrinking markets, large-cap tobacco companies are buying promising marijuana companies, to diversify their product portfolios and move away from nicotine. Tobacco companies realize that marijuana is competition, so they’re working hard to co-opt it.

Marijuana legalization is gathering traction on the federal and state levels. Tobacco executives have wisely determined that it’s only a matter of time before the federal ban against marijuana is lifted. Many billions of dollars are at stake.

The marijuana industry confers outsized profit potential. Why else would Big Tobacco rush to make huge investments in fledgling pot companies? And if anyone knows celebrity marketing, it’s the purveyors of tobacco products. For our report on the best money-making opportunities in cannabis, click here.