The January Effect May Have to Wait

Investors are showing signs of worry as 2021 winds down. And why not?

With an unpredictable news cycle featuring yet another COVID variant (Omicron) and the risk that the Federal Reserve may overdo its tapering maneuvers, fear seems justified.

But history shows that fear and investing don’t mix well, which is why I prefer to look at the market in terms of what I know in order to make sound decisions.

For example, no matter what the Fed or the viruses do, there are two fairly reliable End of the Year traditions in the stock market. One is the so called Santa Claus rally, and the other is the January Effect. And while contrary to their strict definitions they often occur simultaneously, they shouldn’t be confused with one another.

For its own part, the Santa Claus rally, which is applicable to all stocks is the general tendency of stock prices to rise after Thanksgiving into the end of the year, more so in the days after Christmas and December 31.

Meanwhile, the January Effect, the tendency of stock prices to rise in the month of January results from tax selling in December leading to lower stock prices. This selling generally creates bargains which buyers then scoop up in January of the next year. And because tax selling is seen as being more aggressive in small stocks, this area of the market often leads prices higher in January.

The Reality of the January Effect

So, what are the odds of the January Effect being profitable in 2022?

Of course, nothing is what it used to be on Wall Street. To understand whatever is left of the January Effect, it’s important to know that it’s not always precisely a January event.

In fact, over the past decade or more, when it develops, it usually starts in late November and is often finished before the end of the January. Moreover, as Wall Street has morphed into a liquidity mine field which favors large stocks, small stocks generally lag the overall market, certainly as measured by the S&P 500 (SPX) index. 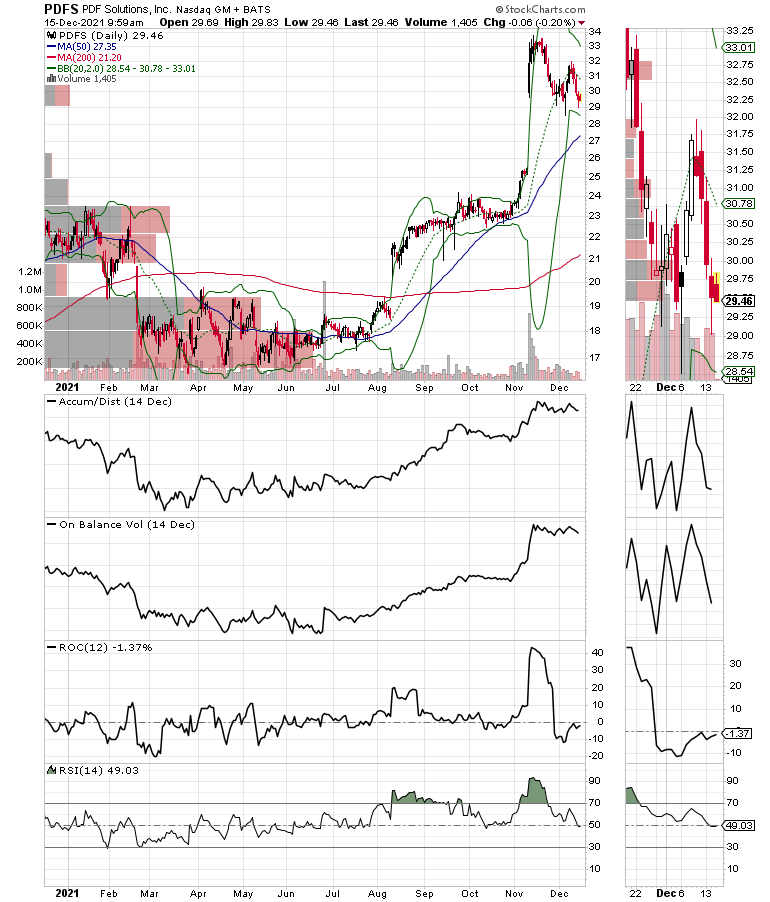 That said, small stocks are often fountains of big gains, whether in January or not. One example, is a stock I recommended in October of 2021, PDF Solutions (NSDQ: PDFS), a small technology company that specializes in cloud technology that helps semiconductor manufacturers and designers work remotely on projects and product assembly.

But for every PDFS there are hundreds of stocks in the small-cap universe which are essentially ignored by Wall Street. And this is why I’m wondering what will happen in January 2022.

Here we are in late 2021, within striking distance of record highs in the major indexes in the longest bull market in the history of bull markets. The S&P 500 is up over 20%, while the S&P Small Cap 600 (SML) has returned slightly below that.

Digging deeper, looking at the month of December’s performance data as of the recent highs, before the Fed and Omicron fears struck, SML was up some 2% while SPX was up 3%. While the percentage gains were pretty good and fairly close for both indexes, a visual appraisal offers a different perspective: 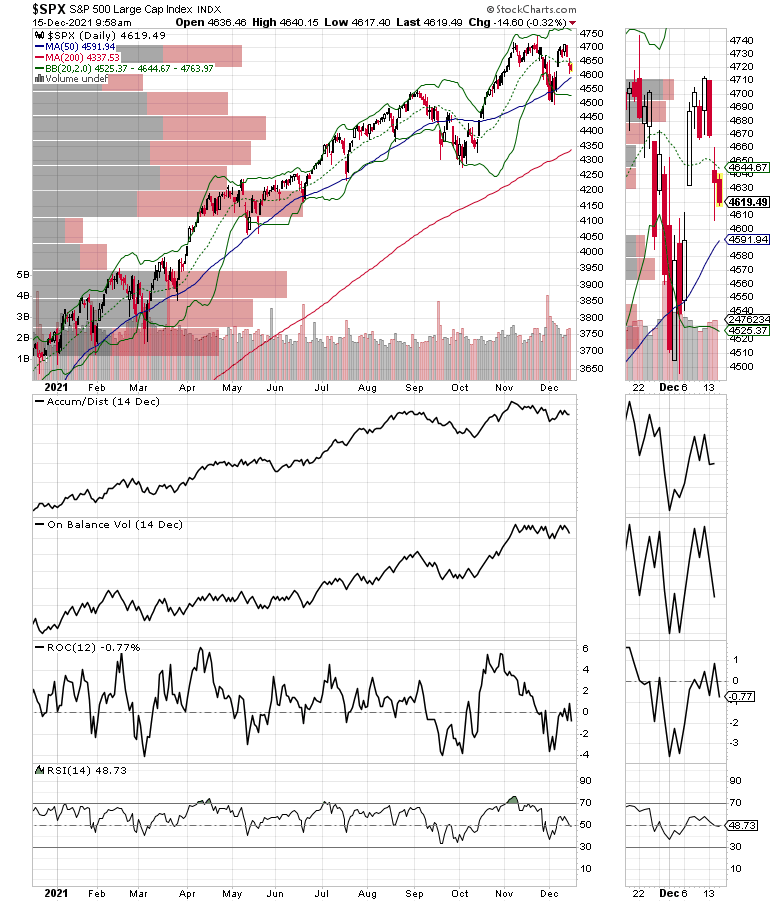 As you can see by the chart of the S&P 500, big money has moved into big stocks for the past 12 months. Moreover, big money used the recent price dip to move back into large-cap stocks. Certainly, there are distortions in SPX due to the capitalization weighting of stocks such as Amazon (NSDQ: AMZN) and Tesla (NSDQ: TSLA) in the index. But that does not negate the fact that big money seems to like large-cap stocks. 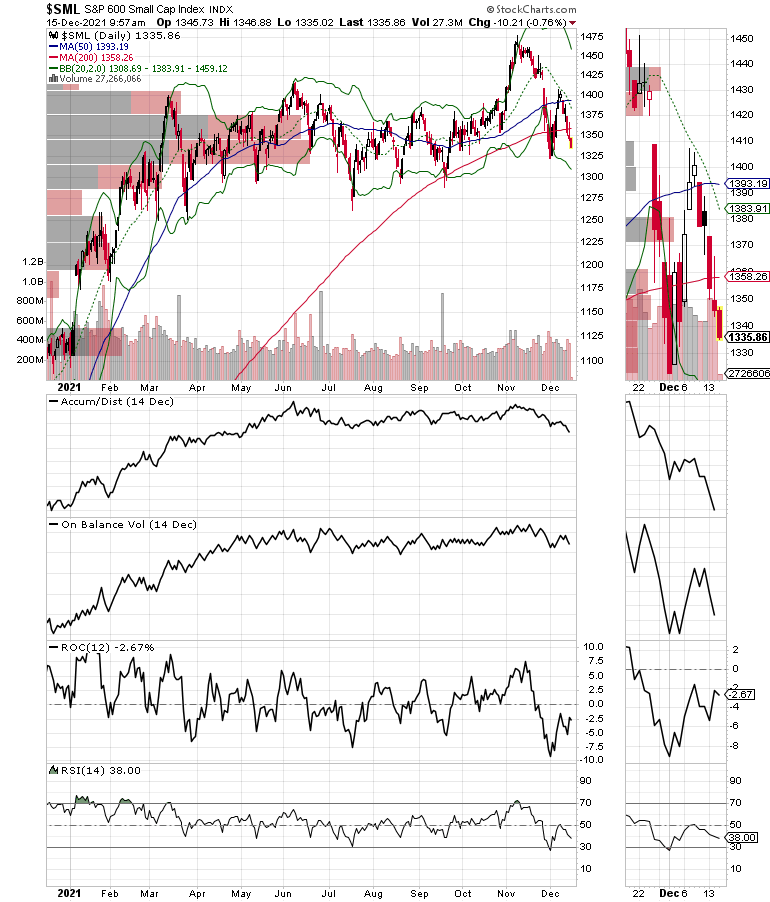 On the other hand, while SPX recently traded near its all time highs, the small stocks are clearly lagging, with SML trading well below its 50 and 200 day moving averages.

In addition, there is a vast difference in valuation with the SPX P/E ratio clocking in at pricey nearly 30 multiple while the SML P/E ratio of just below 15 suggests that small stocks are at a more attractive price range.

A whole lot depends on what the Fed and the virus do, and whether valuations in small stocks are attractive to bargain hunters.

Moreover, unlike in past years whereby the January Effect occurred as early as November, in this market cycle, unless something changes drastically, it looks as if the January Effect may actually happen in January…if it happens at all.

In the meantime, are you looking for a trading methodology that withstands these uncertainties and provides big gains regardless of Fed policy, the path of Omicron, and other market risks? Click here for details.