We’re at a tipping point in society when it comes to marijuana and tobacco. The partaking of cannabis is rapidly losing its stigma, even if you consume pot in public, whereas tobacco is shunned.

In fact, if you want to get treated like a pariah at a suburban house party, don’t light up a marijuana joint. Just light up a tobacco cigarette. You’re likely to get defenestrated by the host.

According to the World Health Organization (WHO), tobacco kills more than 8 million people around the world each year. Research shows that nicotine is as addictive as heroin or cocaine. The WHO states that “the tobacco epidemic is one of the biggest public health threats the world has ever faced.”

Conversely, a growing body of medical research confirms the physical and psychological benefits (if used in moderation) of marijuana and even psychedelics.

As I explain below, Big Tobacco understands these changing social mores, which is why mega-cap global tobacco companies are making major investments in cannabis. Consumers are abandoning tobacco in droves and replacing it with cannabis. The profit opportunities of this transition are gigantic.

As recent poll data from Gallup show, the share of U.S. adults who say they have tried marijuana at some point is now at 49%, the highest percentage measured by the company on record. Back in 1969, when a rather shifty guy named Richard M. Nixon occupied the White House, only 4% of Americans said they had tried cannabis (see chart). 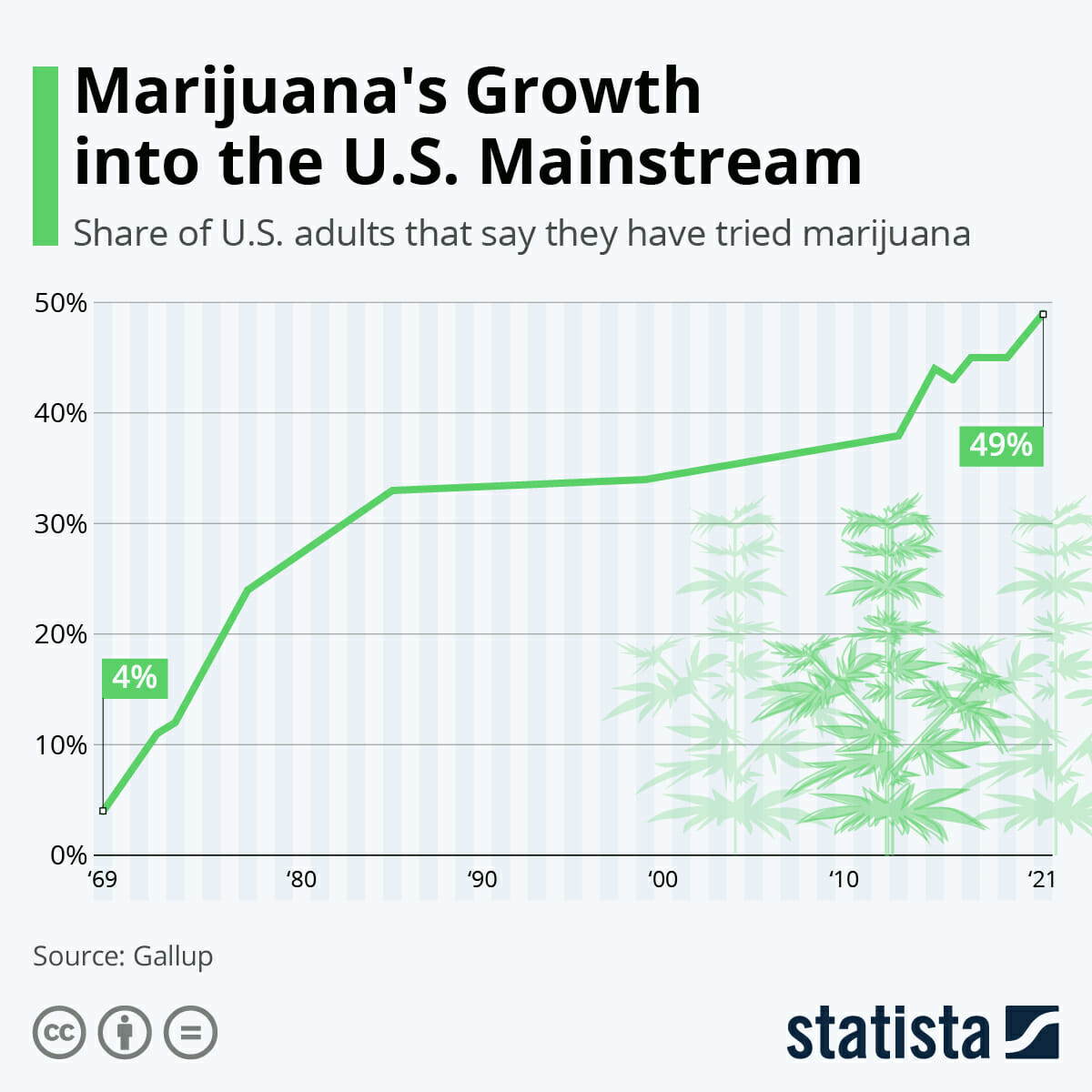 Meanwhile, in a separate Gallup poll, support for marijuana legalization in the country has reached an all-time high of 68%.

The decades-long propaganda war on the cannabis plant produced generations of Americans who grew up convinced that marijuana was the “devil’s weed” only used by society’s misfits and criminals. That notion has become laughable.

Speaking of Tricky Dick, it was Nixon who launched the now-discredited War on Drugs, not as a means to better society but as a crude instrument to put his perceived enemies (war protestors, the political left, minorities, etc.) on the defensive. But in a reversal of fortune that would have astonished people in the Nixon era, cannabis is chasing the Marlboro Man out of town.

Big Tobacco gets hip to pot…

As anti-tobacco laws take hold around the world and consumers abandon cigarette smoking, cannabis use is on the rise. Big Tobacco can read the writing on the wall.

In fact, the U.S. Food and Drug Administration (FDA) recently opened a large door to the moneymaking potential of marijuana as a cure for nicotine addiction.

The FDA is attempting to encourage the development of low nicotine alternatives to conventional cigarettes. At the same time, federal health agencies are researching cannabis and even psychedelics as ways to alleviate addiction to nicotine and opioids.

Marijuana that’s low or free of tetrahydrocannabinol (THC) is becoming a major weapon in the war on nicotine and other harmful drugs. THC is the key psychoactive compound in cannabis that produces the chemical high in the human brain that got marijuana banned on the federal level. THC-reduced marijuana is currently sought by medical scientists, farmers, and agricultural programs.

In response to these new scientific avenues and changing consumer behaviors, Big Tobacco is heavily investing in marijuana companies, generating a powerful long-term tailwind for pot investments. The involvement of tobacco companies and venture capitalists is generating a wave of mergers and acquisitions in the cannabis sector, creating new opportunities for proactive investors.

Marijuana is no longer a touchstone of the culture wars, nor merely a punchline from a hackneyed Cheech & Chong sketch. Marijuana is a multi-billion-dollar business that’s been growing by double-digit rates every year. For our report on the best ways to profit from these unstoppable trends, click here.