Trusting My Gut to Beyond Meat

I must admit that I overindulged over the holidays. I know that I am not alone in that regard. But now, it’s time to do something about it.

One thing I can do is start eating better. As my colleague Dr. Joe Duarte once told me and this video by a nutritionist and gut health specialist makes clear, it all starts in the gut.

That is one reason why I follow Beyond Meat (NSDQ: BYND). The company makes plant-based meat substitutes for beef, chicken, and pork. I first wrote about Beyond Meat eighteen months ago, shortly after its initial public offering (IPO) in May, 2020.

At that time, Beyond Meat was setting the stock market on fire. After going public at $25, BYND crested near $240 less than two months later. 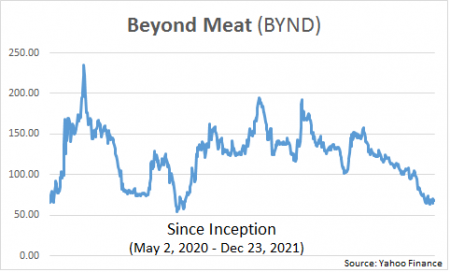 Since then, its share price has steadily diminished. One reason is the coronavirus pandemic, which greatly reduced indoor restaurant sales in 2020.

Another reason is supply chain disruptions that bogged down performance in 2021. Even still, Beyond Meat’s international net revenues more than doubled during the third quarter of 2021 (ended October 30) compared to the previous year.

Despite posting that result, its share price continued to drop. Now trading below $70, enthusiasm for BYND appears to have fizzled out.

Building for the Future

Now that the initial euphoria for BYND is over, this may be a good time to buy it. Most of the “hot money” from its IPO is out of the stock.

Institutional investors control approximately 70% of the stock’s float (shares trading). And since BYND performed poorly last year, it did not benefit from institutional portfolio “window dressing” that drove the stock market higher in December.

However, I suspect that it will benefit from the “January Effect” described by Dr. Duarte a few weeks ago. Now that tax-loss harvesting is out the way, BYND looks cheap and poised to rally in 2022.

Why do I believe that? Despite its anemic stock market performance, Beyond Meat is building for the future. Last month, the company hired a food industry veteran to be the General Manager for its European operations.

The following week, Beyond Meat announced that it will build “a new, state-of-the-art R&D center in Shanghai, China as part of its larger global expansion strategy.” If there is one part of the world that is in desperate need of a new source of dietary protein, it’s Asia.

According to the Food and Agriculture Organization of the United Nations (FAO), “The diet in China is mainly based on vegetable products which provide 81% and 63% of total protein and fat intake, respectively.” The FAO report goes on to note, “The Chinese diet is particularly deficient in iodine” and it “is also deficient in iron.”

With a population of 1.4 billion people, China’s protein deficiency requires an innovative solution. The cost of using traditional food products to fill the gap has become prohibitively high. Prices of most animal-based sources of protein have soared since the onset of the coronavirus pandemic.

Whopper of a Trade

I don’t know how long it will take for Wall Street to recognize Beyond Meat’s long-term growth prospects. But when that happens, BYND could quickly rise above $100.

The least risky way to participate in Beyond Meat’s future growth prospects is to own shares of the stock. If my prognostication for BYND this year is correct, that would result in a 50% gain from its recent share price.

A riskier way to play it is to buy the call option (a call option rises in value when the price of the underlying security goes up). Last week while BYND was trading near $67, the call option that expires on January 20, 2023, at the $70 strike price could be bought for $15.

If BYND rises to $100 by that time, the intrinsic value of this option would be $30. That works out to a gain of 100%, plus whatever time premium may be left in the option.

If BYND doubles by the end of this year, owning the stock would also result in a 100% gain. Under that scenario, the option described above would be worth at least four times what we paid for it.

Of course, this type of trade is not without risk. If BYND goes nowhere this year, our call option could expire with no value.

If that type of “swing for the fences” trading is too risky for you, there are more reliable ways to extract big gains from the stock market. Click here for our special report.