The Wall of Worry on Homebuilders: A Bullish Sign?

There is a rising consensus that homebuilder stocks have seen their highs for the cycle. But I’m of the mind that maybe this isn’t so cut-and-dried.

Consider the widely accepted reasons for why the housing market is about to enter into what many are calling a “well deserved correction,” which is best translated as perhaps an outright crash similar to what happened in 2008:

Sure, it’s hard to argue with a 14% decrease in home sales on a year-over-year basis as we saw in November. Simultaneously, the S&P Case-Shiller index of home prices shows that although prices continue to increase, the year-over-year rate of increase may have topped at 20% as of October.

But here’s where it gets really sketchy for the bears. Those heady data points are ignoring the persistently bullish supply and demand scenario for housing.

Trade What You See and Love the Wall of Worry

I will readily admit that my perception of the housing market, and thus the potential upside for homebuilder stocks, may be tainted by the fact that the state of Texas, where I live, continues to attract transplants from other states and that, in turn, the continuation of the building boom here may not be representative of what’s happening around the country.

But even so, here is the one fact that makes me wonder if the mainstream view is not quite on the money here.

Indeed, no one is arguing that all around the country, there aren’t enough houses available compared to the number of potential buyers. In other words, supply is limited while demand, regardless of somewhat volatile mortgage rates and rising home prices, remains robust.

In fact, based on recent data, the current inventory of homes available would be exhausted in two months without new builds, a historically short period which implies low supplies.

Moreover, as I wrote in my previous article on housing in October 2021, the mainstream analysts have been raising the same basic questions about the housing sector and the homebuilder stocks for the past several years.

Meanwhile, anyone who owned the SPDR Homebuilders ETF (XHB) since my October article would have gained a very respectable 7% or so on their investment during that period. Owning the ETF since January 2021 would have delivered a nifty 45% gain, without dividends. 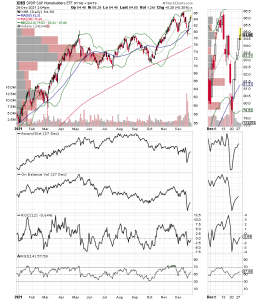 Of course, there are no guarantees that investing in homebuilders will continue to develop such results. But I like the fact that the more negative the talk gets, the more the homebuilder stocks gain. That’s because bull markets climb walls of worry.

So why have homebuilder stocks bucked the negative expectations of the pundits?

Aside from the rising wall of worry, it’s most likely because, despite the fears regarding rising mortgage rates, the U.S. Ten Year Note Yield (TNX), the benchmark for many mortgages, has actually come down since October, from nearly 1.7% to near the 1.5% area. Also, even if yields don’t fall much further and mortgage rates remain in the current range, from a historical standpoint, they are still very favorable.

In addition, the stock market is still on a bullish trajectory, which means that at least a certain section of homebuyers feels wealthy and is willing to take a chance on a home by using proceeds from their stock gains, and even borrowing from their 401k plans. 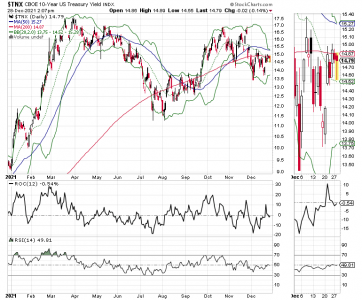 So here are some final thoughts.

There is a wide range of regional issues when it comes to housing. And the major one is that regardless of mortgage rates, people continue to move to areas where employment and tax conditions are most favorable.

In turn, this relocation perpetuates the bullish “low supply/high demand” scenario in housing.

This isn’t going to change anytime soon. Similarly, due to rising costs, reduced land availability, permit and supply chain bottlenecks, and labor shortages, homebuilders won’t be in a big hurry to build too many houses.

As a result, you can expect that supply and demand will remain in favor of the homebuilders.

Thus, in the end, as long as mortgage rates don’t skyrocket and there isn’t a real stock market crash and ensuing economic implosion, the homebuilders are likely to remain an attractive place to invest.

Finally, remember this: The bigger the wall of worry, the better the potential for gains in the stock market. And that you can bank on in 2022 or any other year.

In the meantime, are you looking for a trading methodology that provides big gains but also mitigates current risks? Click here for details.