Winston Churchill was not only a great leader but also a gifted wordsmith. Churchill once said: “A lie gets halfway around the world before the truth has a chance to get its pants on.”

Racing halfway around the world right now is the notion that “green” policies have dampened crude oil production, jacked up oil prices, and thereby boosted inflation. This argument is simply false.

The news media bear major responsibility for perpetrating these energy myths, by neglecting to actually analyze the rhetoric coming out of politicians’ mouths.

Policies in the U.S. and other countries designed to encourage renewable energy and fight climate change are not sufficient to significantly drive-up crude oil prices and by extension prices at the gasoline pump.

OPEC+ concluded a crucial meeting this week, so it makes sense to revisit the energy equation. Energy prices are a major inflation pain point and Federal Reserve policies to fight inflation are spooking global investors. Let’s look at the facts about energy supply-and-demand and what they mean for investors.

Oil ministers from OPEC, Russia and other oil producers (aka OPEC+) agreed on Tuesday to maintain their agreement of incremental monthly production increases in February, boosting output by 400,000 barrels per day.

However, OPEC+ members are getting fractious, and their treasuries crave production revenue, raising doubts as to whether the cartel can make good on the additional barrels. OPEC+ cheaters are returning to their bad old ways, as they show a clear tendency to deviate from their quotas.

The inability of the world’s major oil producers to scrupulously increase production according to a timetable accepted in July is contributing to high oil prices.

In addition, during the worst of the pandemic, we witnessed chronic under-investment in energy production because of lockdowns. Now that the economy is rapidly reopening, there’s a shortfall of supply. Oil producers and refiners are not keeping up with renewed demand.

As the following chart shows, the price of West Texas Intermediate has sharply risen over the past 12 months (data as of market close January 5): 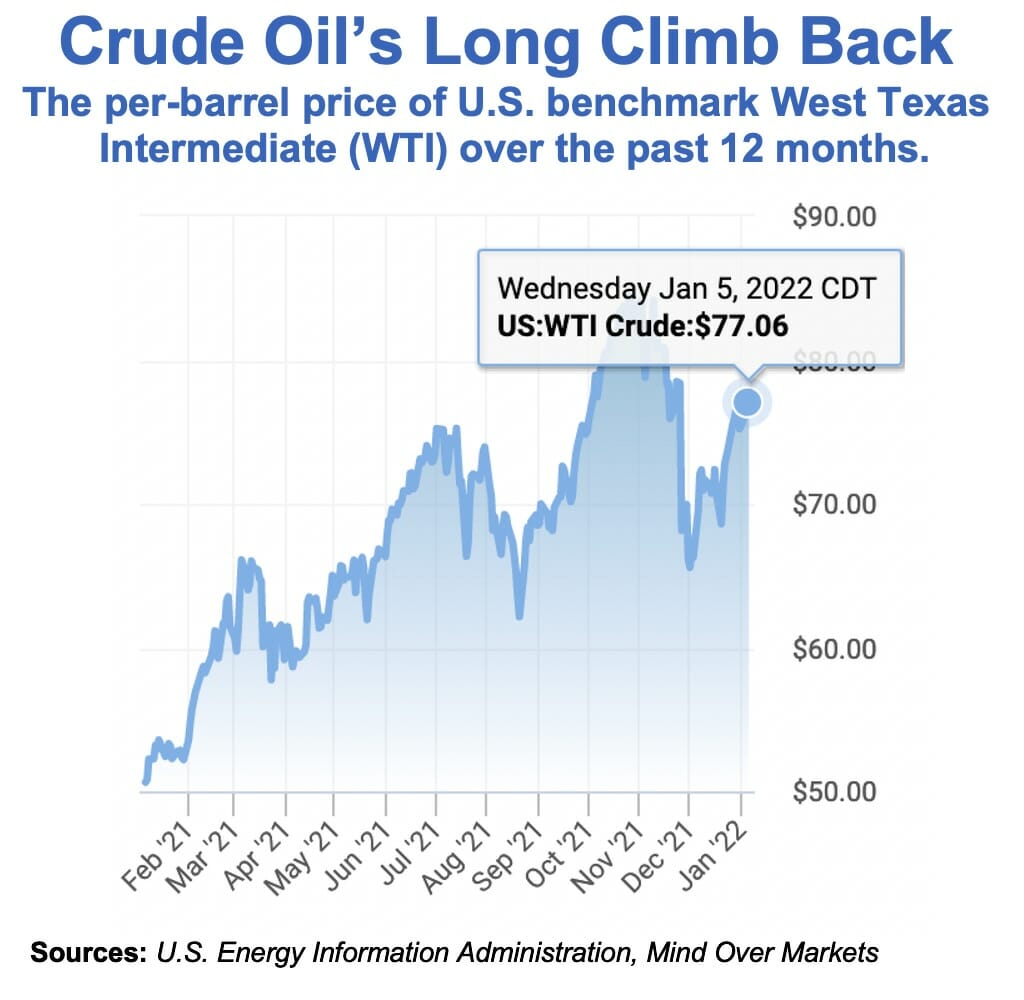 Higher oil prices equal greater profits for energy firms. Indeed, from an investment standpoint, the energy sector has mounted a remarkable comeback from its pandemic slump of early 2020.

According to research firm FactSet, all 11 S&P 500 sectors posted double-digit gains in 2021, led by energy.

Saudi Arabia, the de facto leader of the 23-member OPEC+ group, has been readily able to boost production, but most of the other members are falling behind in their commitments.

The erratic increase in oil production is causing tensions between OPEC+ and the Biden administration, which is eager for producers to pump more oil, to bring down gasoline prices and curb inflation.

As of this writing, the U.S. national average for gasoline prices hovered at $3.30 a gallon, roughly one-third higher than a year ago. Inflation and high gas prices are set to be major political issues in the 2022 midterm elections.

Volatile energy prices have been whipsawing investors. Wall Street has been encouraged by the energy sector’s comeback, only to get second thoughts as higher oil prices dredge up inflation fears.

Storm clouds in the east…

Weighing on stocks in the U.S. and overseas, especially on tech shares, is the Federal Reserve’s hawkish pivot. According to minutes released Tuesday of the Fed’s December 14-15 policy meeting, the U.S. central bank is considering raising interest rates this year sooner than expected to fight inflation.

How can you protect your portfolio under these uncertain conditions? Our investment team has devised a trading methodology that provides big gains but also mitigates current risks. This system makes money regardless of the direction of energy prices, inflation, or monetary policy. Click here for details.

John Persinos is the editorial director of Investing Daily. Got opinions or questions? Send your letters to: mailbag@investingdaily.com. To subscribe to John’s video channel, follow this link.