I’m a junkie for World War II documentaries. I was recently watching footage of the German Wehrmacht sweeping through France in 1940, and it occurred to me that Omicron is akin to a blitzkrieg. Will the microscopic pathogen succeed in subjugating Europe, whereby other would-be conquerors failed?

As the highly contagious coronavirus Omicron variant races like a Panzer division across Europe, countries on the Continent are taking health measures that are economically debilitating.

Scientists provide hope, by indicating that Omicron could soon subside globally. But until that happens, European countries are re-implementing lockdowns, quarantines, and vaccination mandates. The strictness of these measures would be politically untenable in the U.S.

Just a few months ago, analysts were crowing about Europe’s economic rebound and its appeal as an investment destination. No longer.

Both the U.S. and Europe are reporting record numbers of Omicron infections, a trend that’s dinging growth projections. Asia has slowed the spread through earlier proactive measures.

Don’t get me wrong. The global rally in equities remains intact and a full-blown recession this year in the U.S. and Europe is unlikely. But risks are mounting.

That’s why our investment team has put together a report that pinpoints key “megatrends” that should unfold regardless of threats like Omicron. Some of our predictions will astonish you. More about that, below. But first, let’s look beyond America’s shores and see how European economies are faring under Omicron.

First spotted in November, Omicron also has afflicted the U.S., but Europe is taking more draconian steps to combat the virus, which in turn is clobbering the region’s economic prospects. In the U.S., many political leaders are more willing to contend with the adverse health consequences of looser COVID restrictions. 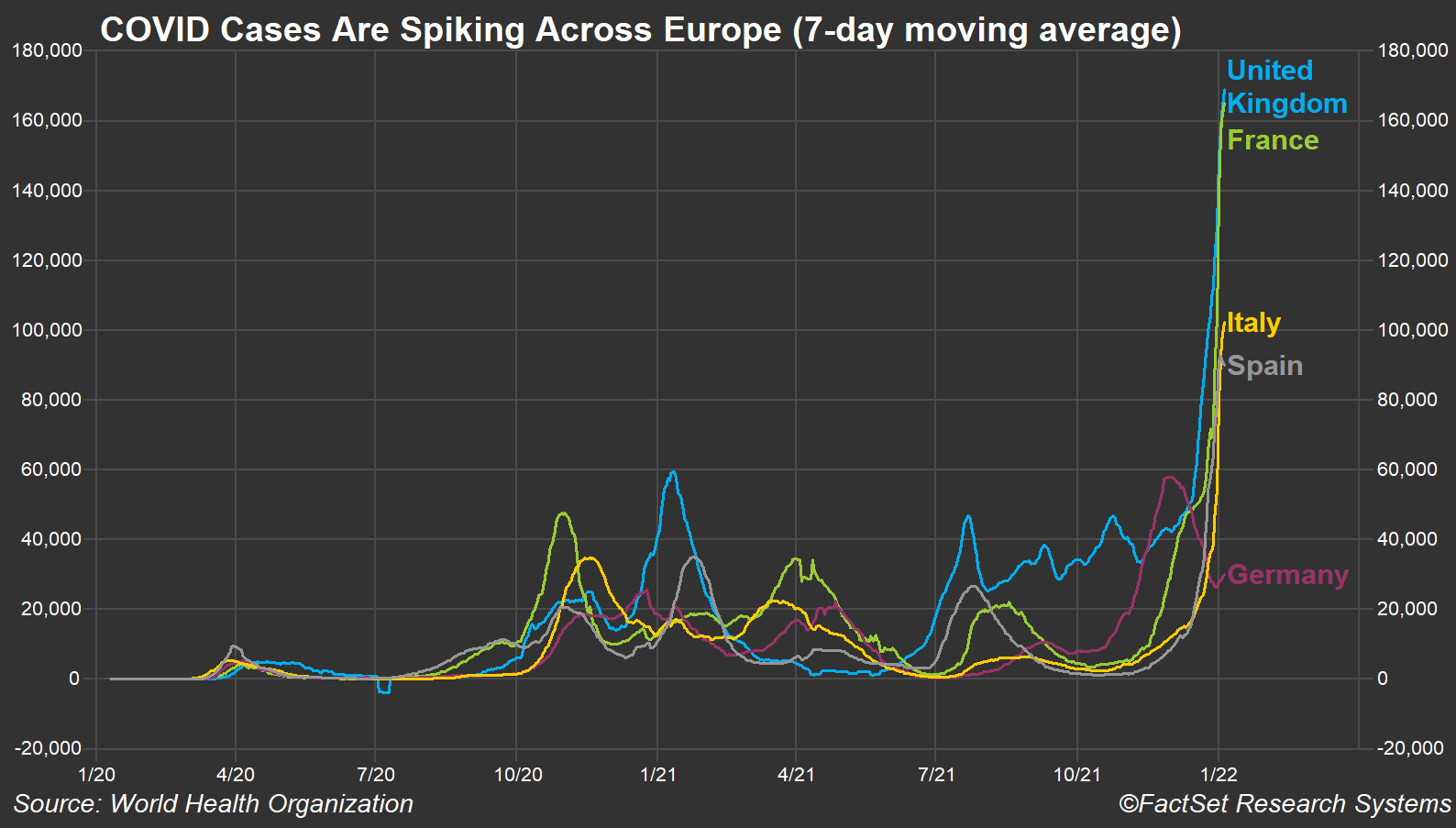 Germany, the region’s largest economy, instituted a new series of social and business restrictions that took effect December 28. The United Kingdom, France, Italy, Austria, the Netherlands, Spain, and other European countries have followed suit. The UK has been hit particularly hard with Omicron cases.

European countries are limiting the size of gatherings, closing restaurants and bars, holding sporting events with no fans in attendance, and mandating vaccination passes for entry into public spaces.

These health measures are politically possible in Europe because of the region’s ingrained sense of collective social responsibility. The upshot for investors: Analysts are downgrading their economic growth forecasts for the region.

According to research firm FactSet, the median estimate for the Eurozone’s real gross domestic product (GDP) growth in the fourth quarter of 2021 is currently just 0.6% quarter over quarter, versus projections of 1.2% growth back in July.

Analysts also have slashed their forecast for the first quarter of 2022, projecting quarter-over-quarter GDP growth of 0.4% compared to the projection of 0.8% in October (see the following chart). 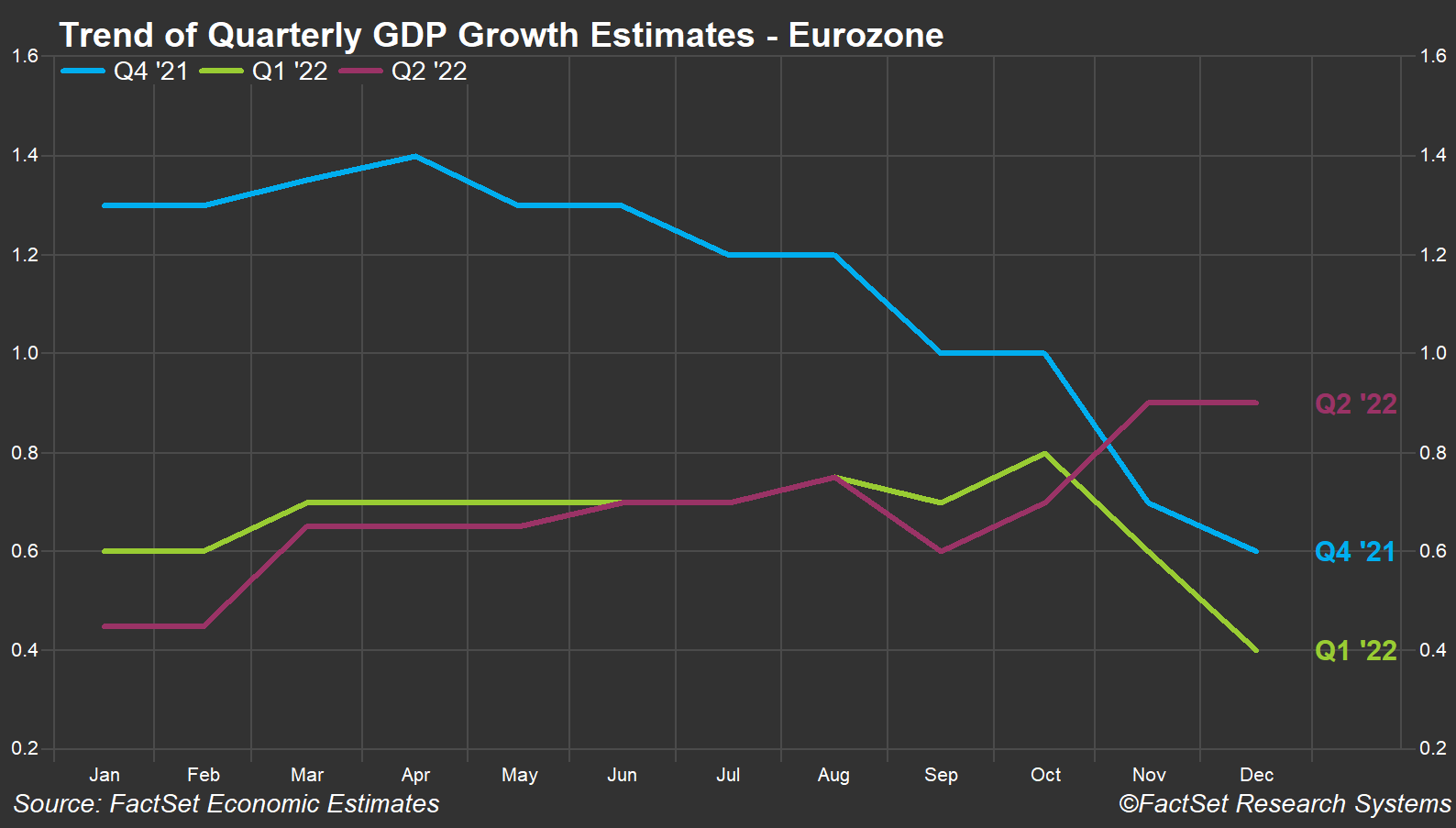 In November, the harmonized consumer price index (HCPI) in the Eurozone rose 4.9% on a year-over-year basis; energy prices were up 27.5%. The core HCPI, which excludes the volatile energy and food components, was up 2.6%.

These inflation growth rates are well above the European Central Bank’s (ECB) 2.0% inflation target. As with the U.S. Federal Reserve, both the ECB and the Bank of England have indicated that they will raise interest rates in 2022 to combat inflation. Increasingly hawkish monetary policy, in the U.S. and Europe, is a headwind for investors.

Europe’s sudden economic deterioration due to Omicron is bad news for the U.S. as well, because it means a weaker market for U.S. products.

The unexpectedly negative turn of events in Europe is a reminder that you need to stay on your toes in 2022, as the pandemic and rising inflation derail economic and financial forecasts that seemed so solid just a few weeks ago.

To guide you through these perilous times, our analysts have compiled a special report of seven shocking investment predictions for 2022, and how to profit from them. To download your free copy, click here.