Federal Reserve Chair Jerome Powell spoke! But what did he mean?

Powell has more control over the economy and the fate of your daily finances than anyone on earth. That’s why, when Powell speaks on the public record, his utterances are parsed as if they’re delivered by the oracle at Delphi.

Akin to that ancient Greek soothsayer, Powell is often vague. To avoid spooking the markets, the language of any Fed chair is purposely oblique, which requires interpretation.

Powell testified in front of the Senate Banking Committee on Tuesday, as part of his renomination hearings. He indicated that the U.S. central bank will get more hawkish this year. Only a week ago, the consensus of analysts called for the Fed to hike rates three times this year. The betting now expects four increases, with the first happening as soon as March.

But Tuesday, investors reacted with relief to Powell’s remarks, with stocks snapping a five-day slump. Hawkish remarks equaled a relief rally. So what gives?

The fact is, Powell successfully threaded the needle. He showed sufficient concern for fighting inflation, but didn’t announce any nasty surprises that would torpedo the recovery.

The U.S. Labor Department reported Wednesday that the consumer price index (CPI) jumped by 7% in the year through December, and by 5.5% after excluding volatile prices such as food and fuel (the so-called “core” rate). It was the highest headline CPI reading in nearly 40 years.

And yet, investors took the data in stride. Inflation is baked into the cake, so to speak. After the opening bell Wednesday, the major U.S. stock market indices were again trading in the green.

The Fed strikes a balance…

“The economy has rapidly gained strength despite the ongoing pandemic, giving rise to persistent supply and demand imbalances and bottlenecks, and thus to elevated inflation…We will use our tools to support the economy and a strong labor market and to prevent higher inflation from becoming entrenched.”

Powell also testified that the Fed was considering a faster “taper” to fight surging inflation. Tapering is the reduction of the rate at which the Fed accumulates new assets on its balance sheet under a policy of quantitative easing (QE). Tapering is the first step in the process of winding down an existing monetary stimulus program.

Fed tapering indicates the economic recovery is on solid footing, as underscored by robust corporate earnings performance in recent quarters.

The 10-year Treasury yield currently hovers at 1.72%. The yield has been rising in recent months as inflation proves “stickier” than expected.

Rising yields pose a threat to momentum stocks (e.g. in the technology sector) as investors fret about the erosion of long-term cash flows for these companies. Higher rates mean future profits are worth less today. But rising rates lift other sectors.

Banks benefit because higher rates expand their profit margins. We’re due for quarterly operating results from a handful of Big Banks on Friday.

Overall, the stock market probably has sufficient fuel to keep rising this year. But you need to rotate into more defensive plays.

Your wealth preservation strategy should include the right asset allocation, tailored to your financial goals. The following pie chart depicts the allocation that generally makes sense under current conditions. 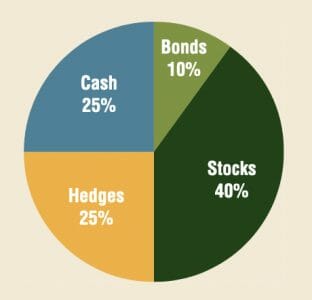 Keep in mind, the chart only provides broad parameters, as recommended by our flagship publication, Personal Finance. You should tweak these percentages, depending on your risk tolerance and stage of life.

As you can see, the rule of thumb is for a portfolio allocation of 25% in the hedges sleeve. Within this sleeve, 5%-10% should be in precious metals such as gold.

Gold has worn a lot of hats over the centuries. The yellow metal has been used as currency and for decoration, in the manufacture of electronics, to fill teeth and fight cancer. It’s also long been used as all-purpose investment “insurance” to protect against both currency devaluation and inflation.

You can increase your exposure to this classic portfolio hedge through gold mining stocks, exchange-traded funds (ETFs), or the physical bullion itself.

I prefer gold miners, which offer exponential gains because of corporate operating leverage. Those with a higher tolerance for risk are reaping tremendous profits from these small fry.

Looking for the best gold mining stock? We’ve pinpointed an under-the-radar gold miner that shines above the rest. Click here for details.