Dispatches from The Digital Village

It’s Friday and the end of the work week seems an appropriate time to dive into the mailbag (figuratively speaking).

Letter writing is a lost art form. Our digital society is characterized by short attention spans and an addiction to smartphone texting. It’s hard for an editor to compete with the endorphin rush people get when they hear the “ping” of an incoming text.

That’s why I’m so grateful when readers take the time and trouble to write and send me emails. Below are a few representative reader questions. I attempted to answer them with investment advice of universal applicability.

The megatrend of 5G…

“Technology stocks soared in 2021, but I’m worried that now they’re overvalued and ready to fall because of rising interest rates. Can you pinpoint a tech trend with staying power and multi-year momentum?” — Richard D.

Yes, a tech megatrend now is the roll-out of 5G, the next generation of wireless technology. 5G will pave the way for a new wave of technological advancement, which explains why so many companies both large and small are jumping onto the 5G bandwagon.

5G will facilitate the Internet of Things by allowing several interconnected electronic devices and machines to communicate with each other instantaneously at ultra-fast speeds.

5G adoption enjoys a multi-year upward trajectory. Regardless of Omicron, inflation, or rising interest rates, the momentum of 5G can’t be stopped. That spells opportunity for the shareholders of the chipmakers, telecoms, systems builders, and device makers that benefit from lightning quick connectivity.

For our new report on how to profit from 5G, click here.

The influence of the VIX…

The vast majority of put and call index options that comprise the CBOE Volatility Index (VIX) are traded by institutional investors as insurance against a stock market crash. Consequently, the VIX tends to overstate downside risk during a correction and overstate optimism during a bull market.

Indirectly, both the VIX and most exchange-traded funds (ETFs) are influenced by algorithms, since selling begets more selling due to the triggering of stop-loss orders. Short sellers pile on and program trading by index ETFs must mimic the weighting of the index, which is constantly changing.

Keep in mind, the VIX is a measure of fear in the stock market. But it’s a poor predictor of the market’s future direction.

The Chicago Board Options Exchange created the VIX as a gauge of “implied volatility” in the market. It’s based on the amount of trading in near-term put and call options on the S&P 500 index.

The VIX is not a leading indicator, as many investors mistakenly believe. The VIX measures current market fear, which has been increasing as inflation gets hotter and the Federal Reserve tightens.

The United States of Weed…

“You’ve frequently written that marijuana is a big investment opportunity. It seems that more and more states are legalizing cannabis. Which states are the biggest markets?” — James H.

U.S. states where cannabis is legal are generating huge revenues from legal sales. In a new report released January 10, research firm New Frontier Data estimates that in 2021 legal state markets will generate over $25 billion in sales, growing to over $43 billion by 2025.

For a breakdown of the biggest U.S. state markets and their projected sales trends into 2025, see the following graphic: 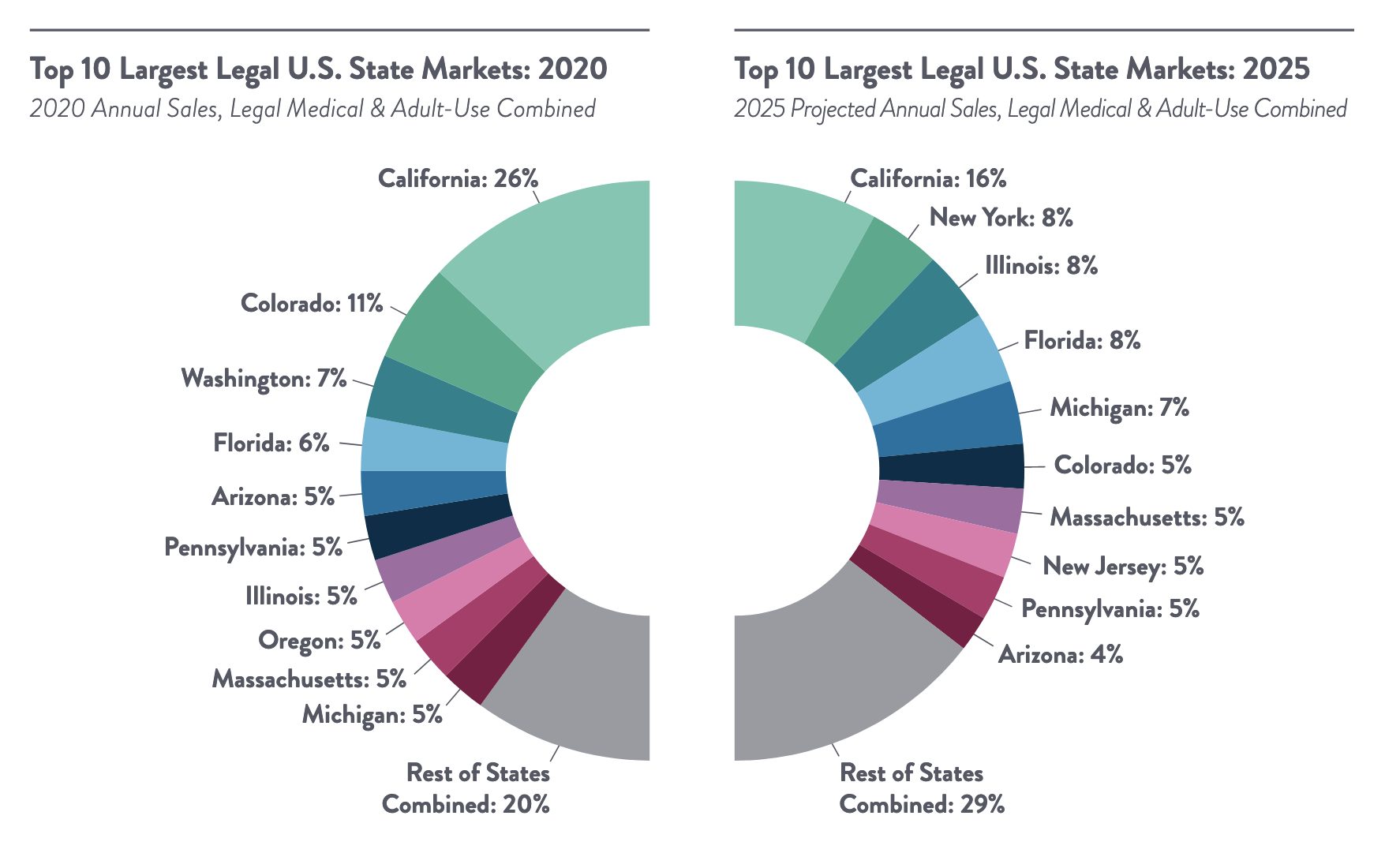 Marijuana is no longer a flashpoint of the culture wars. Weed has become a mainstream consumer product and a once-in-a-lifetime investment opportunity.

Cannabis investments confer market-beating potential and they’re a must for your portfolio. But the key is finding the right pot stocks.

For our report on the best ways to profit from the cannabis industry’s unstoppable growth, click here.