What Is China Trying to Tell Us?

It may seem hard to believe, but last week marked the two-year anniversary of the first reported case of COVID-19 in the United States. Over the next two months, the stock market crashed as investors worried that the global economy might implode.

Shortly thereafter, I suggested a handy tool for predicting the stock market’s behavior. The global economy is heavily dependent on China’s manufacturing activity. Therefore, I created an index consisting of three companies that derive the vast majority of their revenue from China.

To calculate the China 3 Stock Economic Activity Index (C3S), I added up their share prices and adjusted for the differences in their respective market caps. I believed this index could act as an early warning signal if economic activity in China began to wane.

The C3S tracked very closely to the SPDR S&P 500 ETF Trust (SPY) throughout the second half of 2020 and the first half of 2021. But last summer, they moved strongly in opposite directions.

That is the same time that the delta variant of COVID-19 started closing down factories in China. In turn, supply chain bottlenecks played havoc with retailers and manufacturers in the U.S. 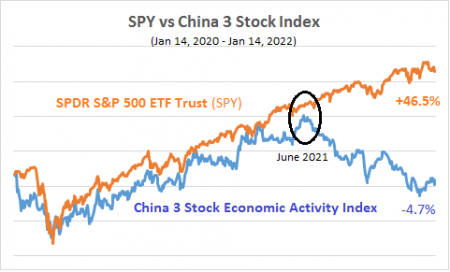 That raises the question: Has the U.S. economy decoupled from China, or is our stock market about to take a dive?

If the U.S. economy is still closely tied to China, then our stock market has a problem. Last week, we learned that economic activity in China dropped precipitously during the fourth quarter of last year.

Although GDP in China grew by 8.1% for all of 2021, it slowed to 4% over the final three months of the year. It is not expected to do much during the first half of this year, either.

That is what the C3S was predicting when it hit the skids seven months ago. On that point, my index performed exactly as intended.

However, it has not yet proven to be an accurate indicator for the U.S. stock market. If it were, the SPY would already be in the throes of a major correction.

That creates a tantalizing investment opportunity. In the months to come, either the SPY should take a big hit or the C3S should bounce back strongly.

You can bet on the first outcome by purchasing put options on the SPY. A put option increases in value when the price of the underlying security goes down.

Betting on the second outcome is a bit more difficult since you cannot buy the C3S or purchase a call option on it. A call option increases in value when the price of the underlying security goes up.

However, you can buy a call option on the iShares MSCI China ETF (MCHI). Through January 14, MCHI fell by 27% during the previous year.

For that reason, the time premiums for call options on MCHI are low. It seems not many people are betting on an economic recovery in China anytime soon.

Meeting in the Middle

Last week while MCHI was trading near $63, the call option that expires a year from now at that price could be bought for $7. For that trade to be profitable, MCHI must gain at least 11% within the next twelve months.

At the same time, a put option on the SPY that expires on the same date at its current share price would require a 9% decline to become profitable.

It doesn’t happen often, but it’s possible that both options could end up profitable. For that to happen, both the SPY and the C3S would have to reverse direction and meet somewhere near the middle.

I’ll be the first to admit that the chances of that outcome occurring are not good. But so long as either option doubles in value, the cost of acquiring both of them is covered.

Admittedly, I just suggested an aggressive way to trade this market. If that type of investing is too risky for you, consider the remarkable success of my colleague, Dr. Joe Duarte, the chief investment strategist of Profit Catalyst Alert.

In our forthcoming Profit Catalyst Symposium, Dr. Duarte will reveal his number one catalyst trade for 2022, and why it could hand you a market-crushing profit. To claim your free VIP seat, click here now.