Oil and Uranium: A Tale of Two Beauties

Investors who grew up in the 1980s may recall a highly theatrical glam rock group named The Tubes.

Their specialty was performing outrageous shows in garish costumes. But when that didn’t propel them into the big time beyond a cult following, they stripped down their sound and their look and delivered a couple of big mainstream hits.

One of them was the song titled: “She’s a Beauty,” which was accompanied by an MTV video which got non-stop airplay for months.

But aside from the cool tune, what has stuck with me was the refrain, which hauntingly told the listener: “Don’t fall in love. She’s one in a million girl.”

So why am I dredging up this bygone rock band of the Big Eighties? Aside from the fact that The Tubes had a great song, that “don’t fall in love” line is applicable to investing as well.

The truth is that too often, we stick with an investment well past its prime. We fall in love with it. And while being patient is one thing, especially when a good company has a bad couple of quarters, sometimes it’s not a bad idea to reduce the size of a profitable position as the price climbs.

So today, I will look at both the oil and the uranium sectors and explain why I think falling in love with either could be troublesome in the next few months.

Seasonal Trends or Something More?

Despite recent public support for nuclear power from Elon Musk and Jack Dorsey, the oil stocks are in an uptrend. Meanwhile the leading uranium exchange-traded fund (ETF) continues to show persistent price weakness.

History shows that as the winter season unfolds, the world’s energy supply is usually near the top of the headlines. But this year, given the confluence of politics and COVID, it seems a little different.

That’s because there are rising fears that broken global supply chains in combination with shaky electric grids could lead beyond the potential for potholes such as rolling blackouts and develop into long-lasting, difficult-to-fix craters.

So why are oil prices rallying while the uranium complex, despite a recent threat to 40% of the global mining output for the mineral during the Kazakhstan uprising, is going nowhere?

As they say: “It’s complicated.”

The rising price of oil certainly makes sense due to the seasonal trends and longer-term supply chain related issues. Meanwhile, uranium’s lack of price appreciation is a puzzle, as a quick review shows that nuclear power occupies an important niche in the overall energy equation.

According to the U.S. Department of Energy, the U.S. is the world’s largest producer of nuclear power.

There are 55 nuclear plants in the U.S., which operate 94 nuclear reactors, which in turn produce 20% of the electricity used in the country. Illinois has the most reactors of any state with 11.

Meanwhile in Europe, the future of nuclear power is up in the air with the European Union recently voting to add it to its green energy fuel sources while Germany continues to shut down power plants. In France, five crucial nuclear reactors will be off-line longer than expected due to unexpected problems found during maintenance.

What the Charts Tell Us

We may ponder the underlying issues in the energy market, but as I often say: when in doubt, look at price charts.

And as I noted above, there is a striking difference between the price action of the Energy Select Sector SPDR ETF (XLE) and the Global X Uranium ETF (URA). 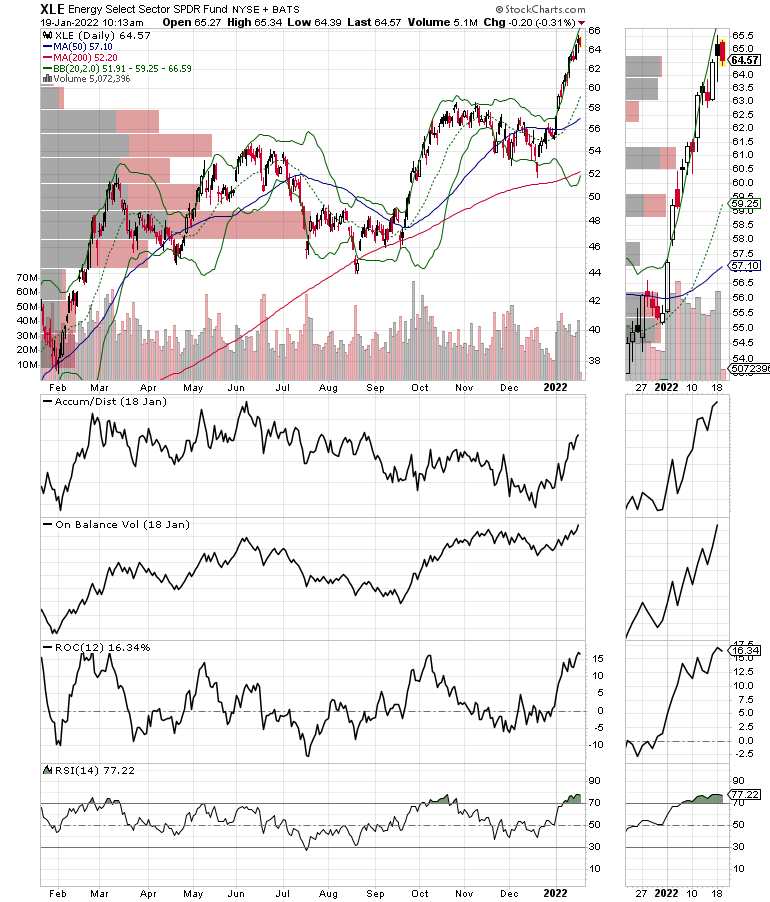 XLE is clearly firing on all cylinders having recently broken out to new highs and seems to be poised to move higher. This is due to the rallies in stocks of oil giant Exxon Mobil (NYSE: XOM) and others like San Antonio based specialty refiner and convenience store operator Valero Energy (NYSE: VLO).

And while XLE could consolidate in the short term, the energy sector clearly has serious momentum behind it. 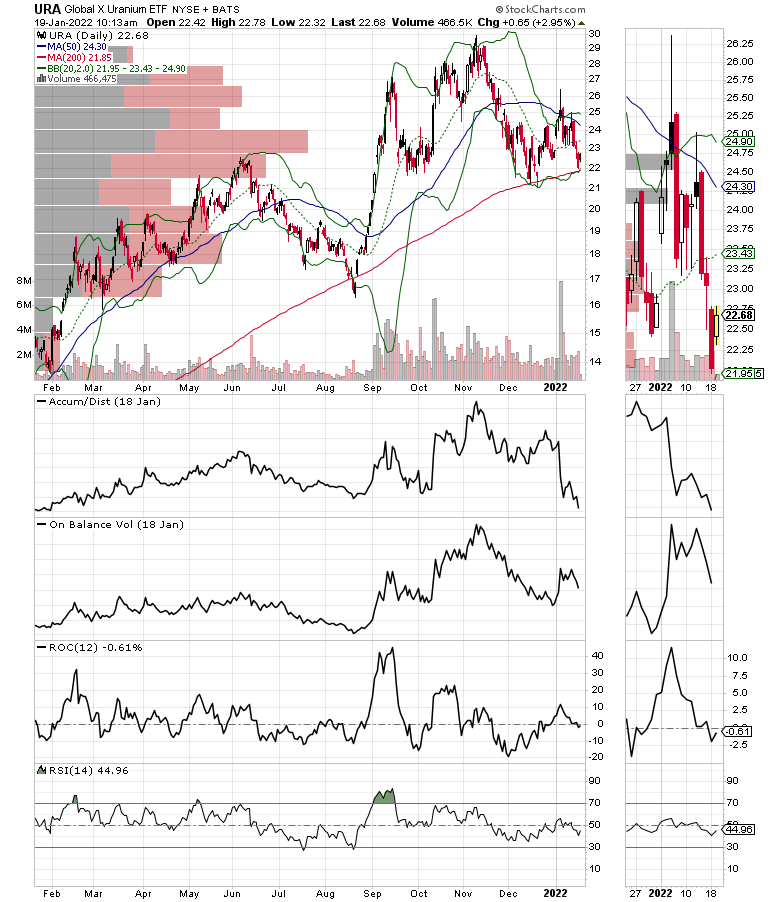 Of course, the big question is whether URA is offering investors an opportunity to enter shares on the current price dip.

Unfortunately, the URA chart suggests that for now the sellers still have the upper hand as all the money flow indicators, Accumulation Distribution Indicator (ADI), On Balance Volume (OBV) and Volume By Price (VBP) are essentially in negative mode.

Specifically, ADI continues to hover near its lows while OBV has just rolled over after a recent attempt to move higher.

Meanwhile, URA is stuck inside a broad resistance area of VBP bars which suggests that the sellers are not done dumping shares and will likely do so on any rally for some time.

A Tale of Two Beauties

So, Buy? Sell? Or Hold? Here are some parting thoughts.

The long term story for URA is certainly compelling, especially when two guys like Musk and Dorsey are advocating for nuclear power and the switch to electric vehicles isn’t likely to slow for some time.

From an investing standpoint, the URA ETF may be an important contrarian play over the next few months.

On the other hand, it’s hard to argue with the excellent looking price chart for XLE in the present.

Certainly, the oil stocks are winning for now. Yet, anyone who has ever invested in commodities will tell you, this could change in a heartbeat.

Thus, keeping URA on your radar screen will certainly make sense especially as the geopolitical situation is likely to change at some point in the future.

Meanwhile, once the weather warms up, it’s likely that the oil rally will cool off which means that XLE’s momentum may slow or roll over.

In the end, the URA story and the XLE chart are both beauties in their own way.

PS: To guide you through these perilous times, our analysts have compiled a special report of seven shocking investment predictions for 2022, and how to profit from them. To download your free copy, click here.