Since today is Valentine’s Day, I thought I’d honor the sentiment by using romance as a theme. So, I punched in the symbol LOVE and discovered The Lovesac Company (NSDQ: LOVE), a furniture manufacturer based in Stamford, Connecticut.

According to the company’s website, “Lovesac’s name comes from its original Durafoam filled beanbags called Sacs.” It goes on to explain that “the company derives a majority of its current sales from a proprietary platform called Sactionals.”

I have to admit that my initial impression of The Lovesac Company was not favorable. But then I looked at its stock chart over the past two years and realized there must be a lot more to it than just a silly name. 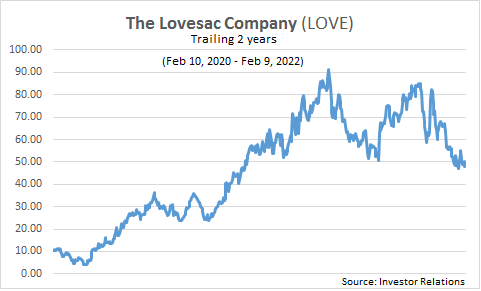 Since then, LOVE has given back half of that gain and has been trading around $50 for the past month. Even still, that is a huge increase from where it was just two years ago.

In December, the company released its fiscal 2022 Q3 results. During the quarter, comparable sales increased nearly 50% compared to the same period the year prior.

For fiscal year 2021, Lovesac recorded a gross profit of $175 million with a gross margin of 55%. Those are impressive operating metrics for any bricks-and-mortar furniture retailer.

The company claims that 37.5% of its business is repeat customers. Apparently, Lovesac treats its customers very well and they are feeling the love in return.

Love Is in the Air

You may have never heard of Lovesac, but you’re probably familiar with Southwest Airlines (NYSE: LUV). If you’re wondering how the airline ended up with the ticker symbol LUV, here’s the story.

When Southwest first started flying in the 1960s, its founders decided they needed a marketing gimmick to get attention. So, their flight attendants wore cupid outfits and handed out love potions (beverages) and love bites (mixed nuts) to the passengers.

That promotion was very successful, so they chose LUV as their trading symbol when they went public in 1971. I’m not so sure that approach would go over too well today. But it succeeded in positioning Southwest Airlines apart from its much bigger and better known rivals.

Now, Southwest is one of the biggest passenger airlines in the United States. Its market cap of $27 billion is roughly equal to American Airlines (NSDQ: AAL) and United Airlines (NSDQ: UAL) combined.

Until four years ago, LUV was one of the great success stories on Wall Street. But since peaking above $66 in January 2018, the stock has lost ground.

Two months ago, LUV fell below $40 as the Omicron variant of COVID-19 played havoc with its crew schedules. Now trading near $47, LUV appears to be benefiting from the travel rebound expected later this year as the pandemic gradually winds down.

There is a special purpose acquisition company (SPAC) that currently goes by the name USGH Acquisition Corp. (NYSE: HUGS). It chose its trading symbol to reflect its mission to create “a company where people love to work and with which customers, suppliers and partners love doing business.”

Like all SPACs, it was created to acquire one or more privately-held businesses that meet its criteria. The company raised $287 million to “merge with a remarkable growth company – irrespective of its industry – whose most enduring competitive advantage is its culture.”

The private equity investor that sponsored this SPAC, Danny Meyer, is also the CEO of Panera Brands. Three months ago, HUGS issued a press release announcing that it will merge with Panera Brands after its initial public offering (IPO) has been completed.

However, the date of that transaction has been pushed back and it is unclear if the merger will ever happen. If it does not, HUGS may pursue an alternative merger candidate that it loves. Provided, of course, that the feeling is mutual.

The harsh truth is that the emotions that drive the stock market are fear and greed, not love. For that reason, you would be better served making investment decisions based on a proven system for making money in all types of markets.

And for that, I suggest you turn to my colleague Jim Fink.