The Bright Side of Higher Interest Rates: Cash Ain’t Trash

There’s an old Steve Miller song titled “Your Cash Ain’t Nothing But Trash.” It’s all about a guy that’s having a bad day while engaging in some shady activity.

But regardless of the premise of the song, the message is clear. Sometimes, such as during periods when interest rates are near zero, having cash which doesn’t earn interest seems like a waste of time.

On the other hand, stock investors are unhappy when central banks raise interest rates.

And why not? Higher interest rates are well known to be the death of bull markets in stocks.

In the real world, cash isn’t as useful as it once was, because higher rates also make it harder to afford a home, raise the price of car leases, and juice credit card interests higher.

Yet, just as low rates are good for stocks, there are also some positives related to higher rates:

This may seem obvious, but higher interest rates from the Federal Reserve influence the rates paid by government bills and bonds. Specifically, the 3- and 6-month U.S. Treasury bills are benchmarks for money market funds and savings accounts.

Of the two, money market funds benefit more from higher rates than savings accounts. This is a big positive for brokerage accounts, including 401k plans and Individual Retirement Accounts (IRAs), because as cash builds up in the money market accounts held within a diversified portfolio, either through stock sales, continued additions to savings, or both, higher rates will help grow the next egg which can be used more aggressively when stock market conditions improve. 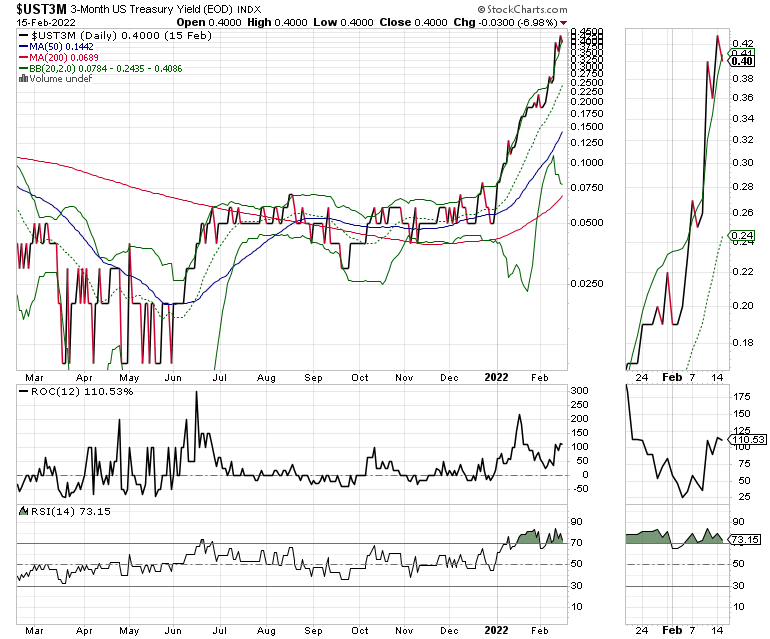 A recent graph of the U.S. Treasury 90 Day (3 month) Bill shows the recent and aggressive rise in short term yields. Note that this increase is in expectations of the Federal Reserve raising rates, which means that it is possible that after the first rate hike, the increase could be larger, or perhaps not, depending on market conditions at the time.

Bond Bull Markets Rise from The Ashes of Rate Hikes

A similar occurrence can be spotted in the U.S. Treasury Bond market where the benchmark U.S. Ten Year Note (TNX) has been climbing steadily over the last few weeks as the Fed has been foreshadowing multiple interest rate increases for 2022. 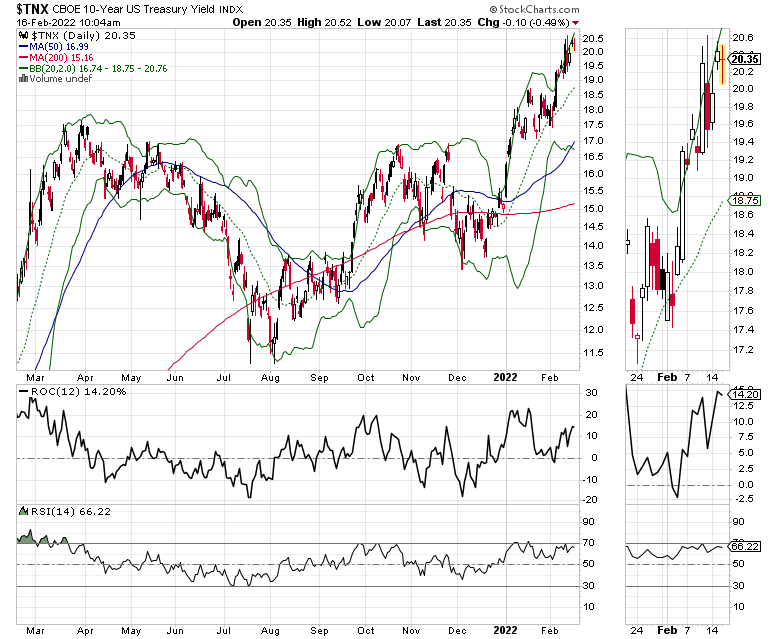 In the present, this rise is clearly negative as market interest rates pegged to TNX, such as many mortgage rates, have been climbing and stocks have been volatile.

But in the future, the current pain will decrease. And investors who keep a close eye on this rate, and who buy bonds, or bund funds at the right time, will reap some nice profits when interest rates once again turn lower.

There are plenty of exchange-traded funds (ETFs) through which individual investors can participate in the price appreciation of long term treasury bonds. One is the iShares 20 + Treasury Bond ETF (TLT).

Remember, TLT’s price falls as TNX rises. This, of course, is because lower bond prices are reflected in higher bond yields.

If you’re looking for a sweet spot in the bond market, consider a bond mutual fund that invests in two-year Treasury notes. Two-year treasury bonds often pay a very credible interest rate while trading in a less volatile fashion than 10, 20, and 30 year bonds.

Some short term bond mutual funds, such as Fidelity’s Short Term Bond Fund (FSHBX) are offering a nearly 1% yield currently. But there is no need to be in a hurry. If you’re going to follow this strategy I suggest you ease in over the next few weeks to months.

Focus on Strength and Become a Saver

In the above sections, I’ve focused on the future. Here I want to discuss the present, especially for those who choose to trade in the current market environment.

First, as my colleague, John Persinos recently wrote, when it comes to the big picture regarding your portfolio, there is no substitute for having a plan.

But in addition to John’s time tested words of wisdom, there are also some simple focused trading principles to consider during volatile markets, especially those related to the expectations for higher interest rates:

Second, if you must invest, look for areas of the market where there is strength.

One of them in the recent market has been the energy sector. Of course, that makes sense because there is a supply/demand imbalance in oil and natural gas.

Moreover, because there have been closures of some pipelines, even if supplies improve, there will be some persistent distribution issues which could also contribute to higher energy prices.

All of which adds up to one simple fact: energy companies have pricing power.

A great way to play the energy sector is via the Energy Select Sector SPDR ETF (XLE).

But be cautious. Energy stocks have already had a big run and may become volatile as time passes.

Higher interest rates are generally negative for the stock market. However, there are ways to reduce portfolio risk during volatile markets without taking big risks.

By taking a few simple steps, especially through increasing the amount of money in a money market fund that should pay a better interest rate than it has in the past, and by sticking to strong areas of the stock market, any investor should be able to weather the storm if indeed the Fed pushes stocks into a bear market.

Finally, don’t forget that at some point when the Fed lowers interest rates again, a new bull market in stocks will be born. And that’s the time to put a more aggressive trading plan to work.

Editor’s Note: Looking for ways to mitigate the risks described in the above article? Consider the proven options trading methodologies of our colleague Jim Fink.