How to Play the Ukrainian Rebound

Last week could not have gone much worse for the stock market. As a shooting war broke out in Ukraine, the price of oil topped $100 a barrel while the price of gold approached its all-time high price near $2,000 an ounce.

All of that adds up to more inflationary pressure in the months to come. Higher energy prices have a deleterious impact on most sectors of the economy. That is why all of the major stock indices have taken a beating so far this year.

However, there is a silver lining to the dark clouds gathering over Wall Street. Some solid businesses are being sold off along with the rest of the stock market. That lack of rationality creates an opportunity to acquire some good names on the cheap.

I don’t advise buying individual stocks to play a broad-based rebound after the situation in Ukraine settles down. Instead, I suggest using exchange-traded funds to make sure you don’t miss the boat. Here are three that I believe will rally strongly over the remainder of this year.

Rising interest rates mean high-multiple momentum stocks are out and low-multiple value stocks are in, especially those that pay a respectable dividend yield. That’s why I like the ALPS Sector Dividend Dogs ETF (SDOG).

This fund has a simple strategy. It owns the five highest-yielding stocks in each of the 10 sectors (other than real estate) that comprise the S&P 500 Index. The fund’s holdings are reconstituted annually and rebalanced quarterly. 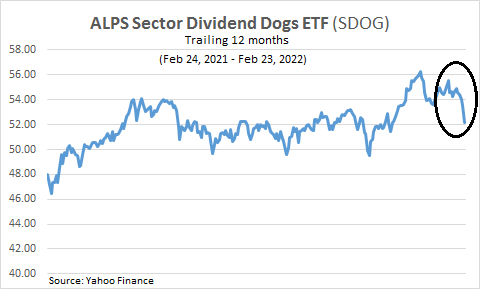 Since peaking above $56 six weeks ago, SDOG fell below $52 last week. At that price, the fund’s most recent quarterly dividend works out to an annualized yield of 3.2%. That yield should appeal to income investors moving out of bonds into the type of reliable dividend payers that this fund owns.

Based on the recent performance of the SPDR S&P Retail ETF (XRT), you might think that American consumers have forgotten how to spend money. Since peaking above $104 in November, XRT traded below $71 last week. 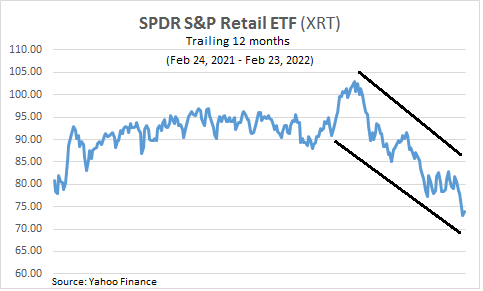 There is no denying that retail stocks became overvalued last year. As the economy gradually reopened in the wake of the coronavirus pandemic, consumers spent like never before.

But now, the threat of inflation has pushed retail stocks lower than they deserve. We may not spend quite as much as we have in the recent past. However, we certainly won’t spend a third less as the performance of this fund might suggest.

I think a fair price for this fund is about midway between its recent high and low. That works out to roughly $87, which is 20% above where it was trading late last week.

Until recently, I never thought I’d say that tech stocks are cheap. But after the 16% drop in the tech-heavy NASDAQ Composite Index over the first seven weeks of this year, some of those companies are beginning to look oversold.

Since the tech sector encompasses so many divergent interests, I’d focus on a specific market that can be clearly defined. In this case, I’d go with the Global X Internet of Things ETF (SNSR).

Since peaking above $40 three months ago, SNSR has fallen steadily to drop below $32 last week. As a result of that decline, the fund has actually lost ground during the past year. 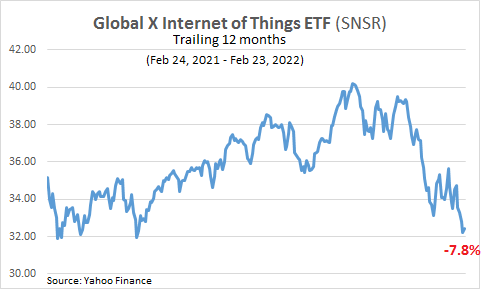 What most investors fail to grasp is that the internet of things (IoT) is a solution to rising costs. The increased productivity and efficiencies in consumption that the IoT creates are headwinds to inflation.

I believe these three funds will soon reverse direction and rally strongly. But if this type of contrarian investing is not for you, here is something else for you to consider: the advice of my colleague Jim Fink.