VIDEO: Wall Street and The God of War

Welcome to my video presentation for Monday, February 28. Below is a condensed transcript. For additional charts and data, watch the video.

In Homer’s Iliad, father of the Greek gods Zeus says to his son Ares, the god of war: “To me, you are the most hateful of all gods on Olympus. Forever fighting is dear to your heart.”

Historians estimate that during the past 3,400 years, humans have been entirely at peace for a cumulative total of only 268 years. It’s why global armaments budgets are astronomical. It’s also why modern financial markets have bounced back fairly quickly from declines caused by military invasions.

Instead of advising a risk-off strategy right now, I see the war-induced market slump as rife with buying opportunities. Notably, several technology names that were trading at nosebleed levels are, because of the NASDAQ’s correction, reasonably valued again. The energy sector also looks appealing.

The stock market typically regains its footing after the initial shock of a geopolitical crisis wears off, particularly when (as is the case now) the economy and corporate earnings are on solid ground.

Watch This Video: Cry Havoc: How War Affects The Markets

By the end of the week, U.S. stocks held their own in choppy trading but the MSCI EAFE ended the week in negative territory, as overseas traders worried about the security of Europe’s energy supply from Russia (see table). 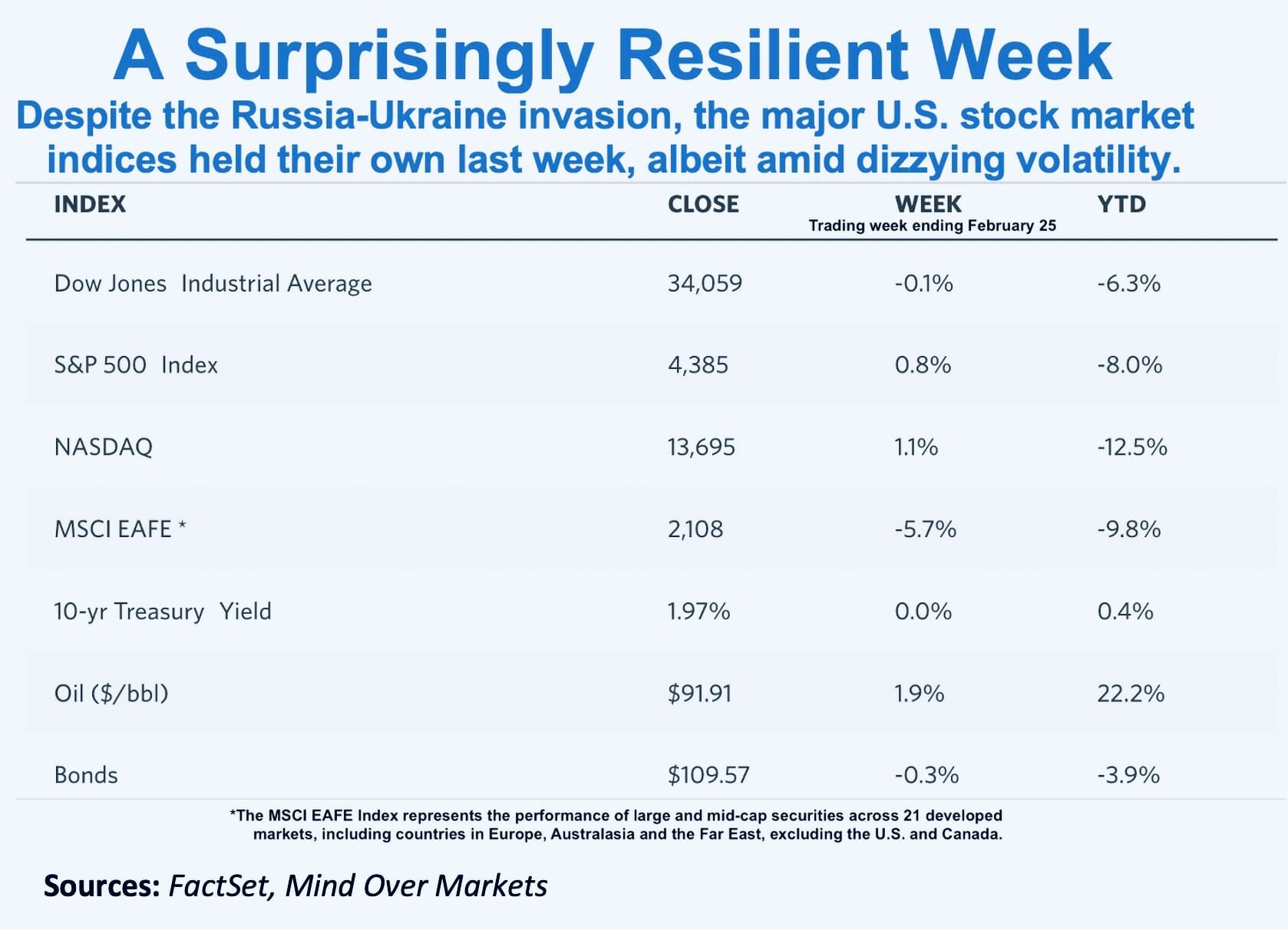 Sanctions have initially refrained from embargoing oil and gas purchases from Russia. Also at first, Russia wasn’t banned from the crucial SWIFT payment system by which global payments are made. However, as of this writing Monday, the U.S. and its allies were taking steps to ban certain Russian banks from SWIFT, which would severely hamper Russia’s ability to function in the transnational financial system.

The West is trying to thread the needle; it wants to punish Russia, but not at the expense of their economies. Regardless, the volume of trade between the U.S. and Russia is minor, and Russia’s economy is only the 11th largest, accounting for less than 2% of global gross domestic product.

That said, Russia is a significant commodities producer and exporter. Nearly 40% of Europe’s natural gas and 25% of its oil comes from Russia.

Russia also is a major exporter of wheat, accounting for about 25% of the global wheat market. Along with energy, agricultural and food costs have been skyrocketing. One of the worst economic consequences of the Russia-Ukraine conflict is the prospect of inflation that gets worse than expected.

The U.S. Commerce Department reported last Friday that the personal consumption expenditures (PCE) index in January shot to a new 40-year high, driven by surging food and energy prices. The PCE rose 6.1% over the past year, the fastest pace of increase since 1982. Prices climbed 0.6% in January from December, up from 0.4% the previous month.

When geopolitical crisis hits, oil prices typically surge and the inflationary effect ripples through the broader economy. This time around has been no different. U.S. benchmark West Texas Intermediate and international benchmark Brent North Sea crude last week shot past $100 per barrel for the first time since 2014, before settling into the $90s.

If the West reaches a nuclear deal with Iran and sanctions get lifted against that major energy producer, crude oil prices could ease in coming weeks. What’s more, the U.S. is coordinating with allies for the release of strategic reserves, and U.S. shale producers seem eager to boost production to profit from high prices.

There’s another positive factor: the Russia-Ukraine war could prompt the Federal Reserve to ease up on tightening, to shore up the vulnerable economic recovery.

Under the conditions that I’ve just described, energy-linked equities and exchange-traded funds make sense now. Rising energy prices raise corporate costs, hurt consumers, and generate greater pain at the gasoline pump, but they also lift the earnings and revenue of the oil and gas sector.

Got any questions or comments about the Russia-Ukraine war and its effects on the markets? Drop me a line: mailbag@investingdaily.com.