The Biggest Winner of the War in Ukraine

Shortly after the downfall of the Soviet Union 30 years ago, western capitalists tabbed Russia as the next great international growth opportunity. And for a while, it was. The massive country contains an abundance of natural resources including petroleum and minerals.

However, it was not long until unrestrained greed took over, abetted by Russia’s then prime minister and current president, Vladimir Putin. If you want to get an insider’s view of what that looked like, I recommend you read Red Notice: A True Story of High Finance, Murder, and One Man’s Fight for Justice.

Despite the rampant corruption, investment in Russia continued. When that much money is on the table, a lot of people are willing to look the other way if some of it goes missing.

They can’t look the other way any longer. Severe economic sanctions imposed by most developed countries in response to Russia’s invasion of Ukraine last month triggered a collapse of the Russian ruble and stock market.

The top 10 holdings of the VanEck Vectors Russia ETF (RSX) are companies controlled by Putin’s coterie of oligarchs. Since mid-February, it has lost more than three-quarters of its value. 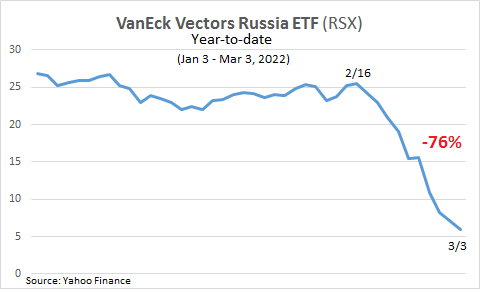 Now, some investors are wondering if it is time to step in and start buying those stocks in anticipation of a rebound after the war in Ukraine is over. They point to the U.S. stock market’s crash and subsequent rally in the aftermath of the coronavirus pandemic as evidence that Wall Street tends to overreact to bad news.

That may be so, but I do not expect the Russian stock market to recover anytime soon. The sanctions imposed on Russia will send its economy into a deep depression that will take many years to fully recover from.

If you are looking for a contrarian investment play on the collapse of the Russian economy, I suggest you look elsewhere. Instead of betting on a Russian rebound, look for companies in other parts of the world that will directly benefit from Russia’s weakened economy.

I believe the biggest beneficiary of Russia’s economic woes will be China. It consumes a lot of what Russia produces and has not imposed any economic sanctions of its own on Russia.

Also, its buying power with Russia just became significantly stronger. On February 15, the exchange rate for the Russian ruble to the Chinese yuan was 0.084. By the end of the month, it was down to 0.058 and still dropping. 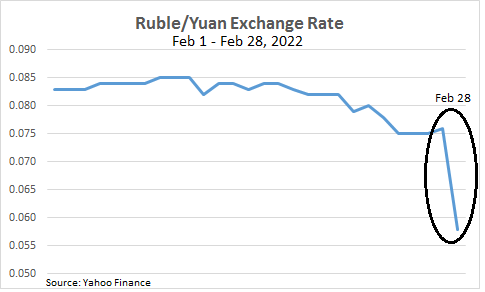 In addition, China would not be competing for those items with countries enforcing strict sanctions against Russia. As a result, China could become Russia’s only major customer with a currency that now buys considerably more goods for the same money.

The biggest winner in all of this is China’s manufacturing sector, which consumes copious amounts of the raw materials produced by Russia. As those costs drop, the operating margins of these businesses could expand proportionately.

For that reason, I expect the Global X MSCI China Industrials ETF (CHII) to be one of the prime beneficiaries of Russia’s misfortunes. The companies it owns should be able to reduce their costs of materials substantially in the months to come.

Vladimir Putin has built his financial empire by exploiting an adversary’s weakness to his advantage. Now, he and his cronies are about to find out what it feels like to be on the other side of that relationship.

Of course, all of that assumes China does not attempt to do the same thing with Taiwan that Russia is doing in Ukraine. If it does, the sanctions imposed on China would put the yuan back on previous terms with the ruble.

Contrary to what most observers believe, I think Russia’s invasion of Ukraine has reduced the likelihood of China invading Taiwan in the near term. Why risk losing the enormous bargaining leverage just gained with Russia over a territory that has considerably less economic value?

However, if China gains enough long-term control over Russia’s oil and minerals assets now, it may be more inclined to attack Taiwan later on. At that point, trade sanctions invoked by the developed world may not be sufficient to prevent China from importing what its manufacturing sector needs to continue operating.

Bear in mind, China is a major exporter to those same countries. For that reason, they will be reluctant to impose the type of draconian penalties being levied against Russia. We may be willing to give up Russian vodka and caviar, but we may feel differently about doing without the electronics, textiles, and myriad consumer goods made in China.

China’s leadership plays the long game with respect to economic development. It will defer gratification as long as necessary to achieve its long-term goals. And now, it does not have to make any sacrifice at all to enjoy perhaps the biggest boost to its economy in a generation.

Admittedly, my interpretation of the events unfolding in Ukraine does not conform to conventional wisdom. For that reason, you may prefer using an investment strategy based on proven results.

Consider the advice of my colleague Jim Fink.