The key moment in All the President’s Men came when Deep Throat told Bob Woodward to “follow the money.”

In this article, I will review simple principles that are useful for all investors in order to develop a bullish or bearish outlook and how to act accordingly, by following the money.

And here’s a hint. Big money drives stock prices. The best the rest of us can hope for is to know how to follow.

Money Ease is the Key

As simple as it may sound, the key to both up and down markets is how much money investors have available to put to work in the stock market. And it follows that the easier it is to have access to money, the more willing investors will be to put it to use.

I call that Money Ease or liquidity.

And why is this important? Because big money investors, those who move the market the most, often borrow money to invest more aggressively. This is also known as margin or leverage.

Much of this process has to do with the Federal Reserve and interest rates. I wrote about this in great detail in my special report titled: The #1 Sick-Market Mistake Even Pro Traders Make (and How to Avoid It).

But here is the bottom line: lower interest rates increase the amount of money (liquidity) in the financial system.

And it’s that easy money that makes investors more willing to borrow money to buy stocks.

Of course, the opposite is also true, which means that higher interest rates reduce liquidity and investors are less likely to borrow money to put into stocks.

Incidentally, there is another variable which affects liquidity: the willingness of investors to lend and borrow money from one another for the purpose of investing.

There are many ways of getting a feel for the market’s liquidity. One of them is to keep up with the news about what the Federal Reserve will do in regards to interest rates.

Unfortunately, by the time this type of news hits the wires, it’s often too late and the damage to the market has been done.

But what if I told you that you could infer the state of the market’s liquidity by analyzing two price charts on a regular basis? And what if by looking at these two price charts, you might be able to get ahead of the news?

The Canary in the Coal Mine

Most investors have heard of junk bonds. But what exactly does the term mean?

It’s fairly simple actually. A junk bond — or as Wall Street’s tricky language refers to them, high yield bonds — is a bond issued by a company with a poor rating.

That’s where the “high yield” comes from. Because investors are leery of the company’s ability to pay the interest on the bond, they will only buy them if the company pays them a higher rate than that which a quality bond, such as a US. Treasury note or bond, might pay.

Here’s a quick example. Let’s say that the U.S. 10 Year note is paying 2% today. In comparison a junk bond may pay a 5% or even higher rate. In fact, the higher the rate compared to a U.S. Treasury bond of equal maturity, the greater the degree of junk in a bond.

Well, it so happens that there is an exchange traded mutual fund (ETF), the ProShares Short High Yield ETF (SJB) which specializes in short selling junk bonds. In fact, SJB is known as an inverse ETF because it is structured to rise in price when the high yield index of corporate bonds it’s based on falls in price.

In other words, when the junk bond index on which the ETF is based falls in price, SJB rises.

This article is not a recommendation of the fund. Instead, it’s a description of how to use it as an analytical too. However, if you want to learn more about this ETF, you can go here.

A Picture Is Worth a Thousand Words

Let’s cut to the chase. Here is how this works.

When liquidity becomes scarce, for whatever reason, junk bonds, because they are high risk investments are among the first to sound the alarm. That’s because investors tend to bail out of them quickly if they think something bad is about to happen. 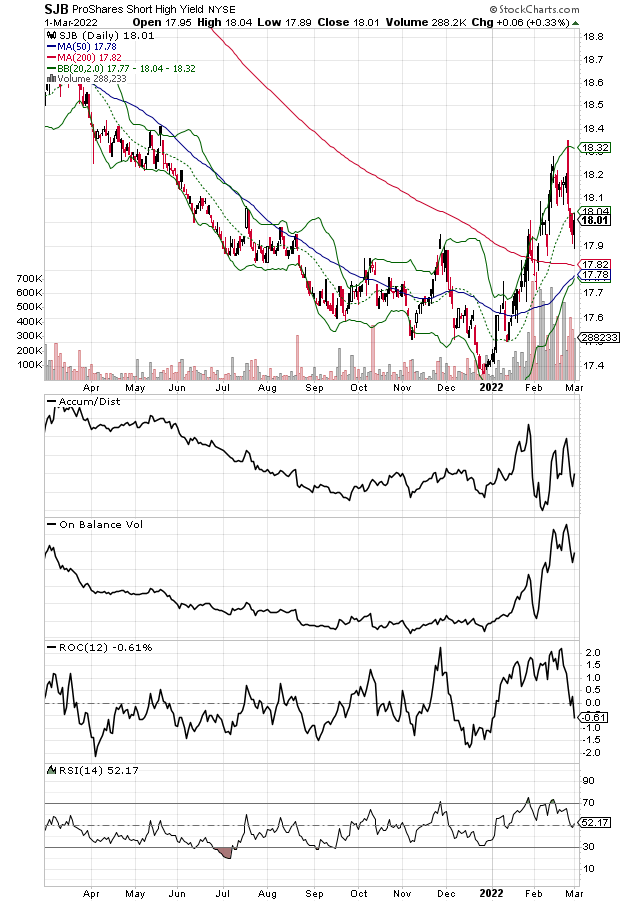 The price chart for SJB over the last few months has been quite useful for the following reasons:

The three bullets above can be summarized as follows. When liquidity is ample, junk bonds are attractive because they pay a premium to Treasury bonds.

But when interest rates start to rise, liquidity is reduced. As a result, junk bonds become risky as investors worry about whether the issuer of the bond will be able to make interest rate payments.

Most important, however, when markets become uncertain such as with the invasion of Ukraine, traders will start raising cash. And by doing so, no matter what the Fed does, the market’s liquidity decreases since they are unwilling to both invest or to lend money to others to invest.

And why are junk bonds important to stocks?

Because junk bond traders are very sensitive to the market’s liquidity. And when they are sold, it’s often an indicator that the amount of money available to trade is drying up. 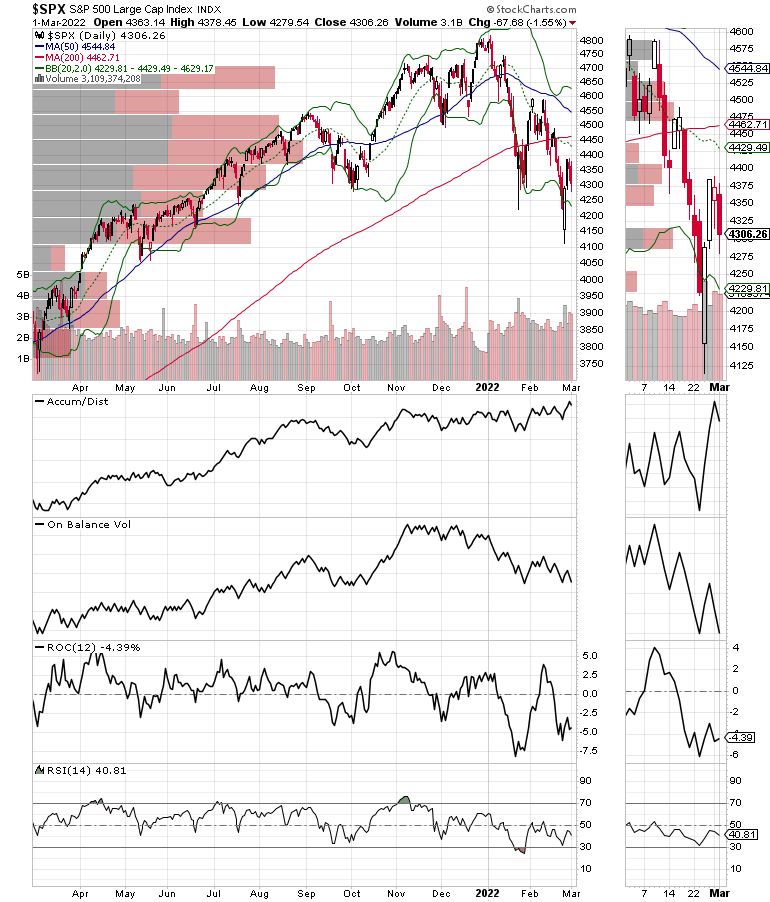 Comparing the price chart for the S&P 500 (SPX) over the same period as seen above for SJB, we see nearly 100% inverse correlation.

Specifically, SPX rolled over almost at the same time that SJB started rallying. Moreover, when SJB sold off, it coincided with SPX getting a bounce.

By comparing the price charts for both the ProShares Short High Yield ETF and the S&P 500, you can get a good idea as to the state of the financial system’s liquidity, i.e. how easy it is for big money traders to borrow money and buy stocks.

In this case, the warning signs started in December giving savvy investors plenty of time to adjust their portfolio and trading approach.

Times of high liquidity (easy money) are usually good times for stock investors because they can follow the money trail left by big money investors who leverage their assets with easy money, while periods of low liquidity (tight money) are difficult at best, and often just outright awful because the big money is usually out of the market.

During these periods SJB falls in price and SPX rises in price.

So, what’s the take home message?

Liquidity makes the market’s trend. And it’s a lot easier to make money when you trade with the trend.

Editor’s Note: Dr. Joe Duarte just provided you with invaluable investment advice. You should also consider the expertise of our colleague Jim Fink.