Welcome to my “Weekly Weed Report” video presentation. Below are edited excerpts.

The revolution in marijuana and psychedelics continues apace. Let’s look at the latest salient developments in these booming industries.

Hawaii. The Hawaii Senate last week approved legislation to establish a state study group to examine the medicinal benefits of psilocybin mushrooms and develop a long-term plan to ensure that the psychedelic is accessible for medical use for adults 21 and older. The measure now heads to the House for a vote. Psilocybin is the active psychotropic substance in “magic mushrooms.”

Oklahoma. The Oklahoma House of Representatives last week approved legislation to decriminalize low-level possession of psilocybin and encourage scientific research into the therapeutic potential of the psychedelic. The bill now heads to the Senate, where its chances of passage are deemed favorable.

New York State: In a stunning move to shows its dedication to “social equity” in the marijuana industry, New York Gov. Kathy Hochul (D) last week announced that the state would prioritize people with past marijuana convictions to receive the first wave of licenses for marijuana retail dispensaries. 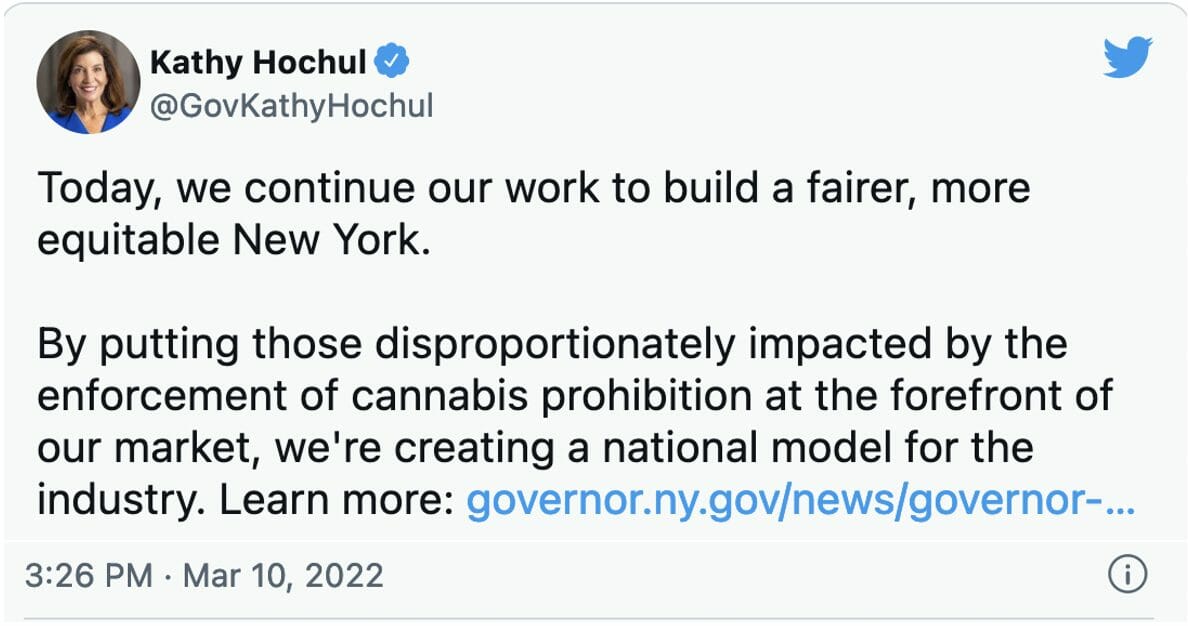 According to the Governor’s Office:

“Governor Kathy Hochul today announced the first-in-the-nation Seeding Opportunity Initiative, which will position individuals with prior cannabis-related criminal offenses to make the first adult-use cannabis sales with products grown by New York farmers. This farm-to-store initiative makes sales in New York possible before the end of 2022, jumpstarts New York’s Cannabis Industry, guarantees support for future equity applicants, and secures an early investment into communities most impacted by the disproportionate enforcement of cannabis prohibition.”

Washington State: The Washington State legislature last week sent budgetary legislation to the desk of Gov. Jay Inslee (D) that includes a proposal to direct $200,000 in funding to support a new workgroup to study the possibility of legalizing psilocybin services in the state.

If the legislation is signed by Gov. Inslee, the Psilocybin Wellness Workgroup would be charged with developing a report on psilocybin services wellness and opportunities in consultation with stakeholders.

National marijuana research. Once again, empirical evidence has debunked the notion that people who smoke pot are unmotivated, lazy slackers.

A new study, published in the influential journal Experimental and Clinical Psychopharmacology, tested the stereotype by recruiting 47 college students (25 frequent marijuana consumers and 22 non-users) and asking them to participate in a series of behavioral studies called Effort Expenditure for Rewards Task.

According to the study:

“The results provide preliminary evidence suggesting that college students who use cannabis are more likely to expend effort to obtain reward, even after controlling for the magnitude of the reward and the probability of reward receipt. Thus, these results do not support the amotivational syndrome hypothesis…Contrary to the amotivational syndrome hypothesis, college students using more cannabis were more likely to select the high-effort choice option…lending consistent support for an association between cannabis use and greater high-effort choices.”

The takeaway: Marijuana has entered the societal mainstream, and there’s no reversing the trend. The prohibitionists are fighting a rearguard action that’s doomed to failure. Keep that in mind if you’re ever hesitant to invest in marijuana because you’re afraid that weed will become illegal again.

Looking for ways to profit from these trends? Our team has unearthed a hidden gem in cannabis pharmaceutical research that most investors don’t even know about.

This trailblazing marijuana biotech is on the verge of becoming “The Pfizer of Pot.” The time to act is now, before this little-known company becomes a household name and its stock becomes unaffordable. Click here for details.