Tech Investing: Don’t Miss the Forest for the Trees

Gordon Moore, the co-founder and former CEO of Intel (NSDQ: INTC), made an astute observation in the 1960s that the number of transistors on an integrated circuit (chip) doubles once approximately every two years. For many years, this observation proved to be more or less accurate and it became known as Moore’s Law.

The transistor is an essential building block of computers. The more transistors you can put on a chip, the faster that chip’s processing speed and the larger the memory capacity. The main reason why modern computers (which includes digital devices like smartphones and tablets) are so fast is that more transistors can be packed onto a chip.

Continuing advances in fabrication (chipmaking) technology and technique have enabled chip companies to pack more and more transistors onto a tiny chip. There is a physical limit to how small you can make a transistor so the pace of increase has slowed in recent years, but chip density (the number of transistors per unit area) is still increasing.

On a single modern microchip, there are billions of transistors. Smaller, faster, and more powerful chips is how we can literally hold a tiny super computer, e.g., iPhone or another high-end smartphone, in the palm of our hands.

Speaking of the iPhone, the product line has been undeniably a smashing success. Fifteen years after the debut of the very first model and even though the company now has numerous multi-billion-dollar moneymakers, the iPhone is still Apple’s (NSDQ: AAPL) flagship product.

The iPhone runs on Apple exclusive iOS operating system, and the phone’s popularity allowed the company to capture users into its closed ecosystem. This means that if you want your tablet or smartwatch to be compatible with your iPhone, you have no choice but to use an Apple tablet or smartwatch.

One look at Apple’s stock history will tell you how well the strategy has worked. When the iPhone was released, AAPL was trading for under $4.50 a share (split adjusted). As of this writing, even with the recent pullback, the stock is around $160. Including dividend received, $1,000 invested in AAPL on the day the first iPhone was released would have become more than $43,000 today.

The iPhone hasn’t just benefited Apple. Companies that supply parts for the iPhone have benefited as well. From a broader perspective, the tremendous increase in digitization and smart devices in recent years has lifted a lot of boats.

As I mentioned earlier, faster and more powerful chips are the engines behind the tech advances over the last decade and will continue to be the driving force behind future advances. Whether it’s 5G, self-driving cars, artificial intelligence, virtual reality, or some other tech, they won’t be possible without the computing power enabled by the latest chips.

And of course, just like the finished product iPhone, microchips themselves have a supply chain. This chain runs from basic semiconductor material like silicon and silver, to the sophisticated fabrication equipment, to the fabrication specialists who actually manufacture the chips (nowadays, most chip companies outsource fabrication to third parties).

In other words, as with the iPhone, growing world demand for chips benefits more than just the chip companies themselves. The growing demand—and there’s no end in sight thanks to increasing digitization and connectivity—is water that lifts many boats. Take a look at equipment maker ASML’s (NSDQ: ASML) stock chart for example. 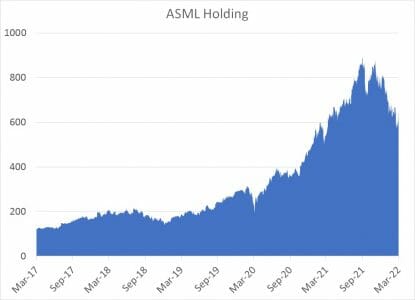 So what is the investment takeaway?

As investors, whenever there are some important new trends or products, we need to consider the full investment ramification beyond just the trend or products themselves. Or else, we risk missing the forest for the trees, and missing out on attractive opportunities.

In fact, Apple is on the cusp of disrupting the world again, with just four simple words: “Introducing the Apple Car.”

Tech bellwether Apple is reported to be working on a fully autonomous self-driving vehicle. But you might be surprised to learn that your greatest opportunity to make money from the Apple Car isn’t buying Apple stock itself.

Make one simple investment move today and you’ll lock in your shot at a huge payday when Apple drops its bombshell news about the Apple Car. For details, click here now.