I watch oil prices closely, because they exert a tremendous impact on the economy. We recently saw an oil price spike above $120 per barrel for the first time since 2008. The last time that happened, it helped usher in the Great Recession.

Much of the economy relies on oil as an input, including consumers at the pump. Higher oil prices mean less money to spend on other things.

The good news is that unemployment has fallen to the lowest levels since the COVID-19 pandemic began. That means the Federal Reserve can begin to raise interest rates, an important tool in helping to curb inflation, without hurting the economy.

The uncertainty around inflation and oil prices is certainly causing a lot of volatility in the stock market. So what is an investor to do?

I don’t think we are on the cusp of a recession. The U.S. economy still seems to be very much in the middle of the business cycle.

But the risks of a recession will rise as long as oil prices remain elevated. Should more Russian oil come off the global market, the risks will go up substantially because oil prices could rise to $150 or $200/bbl. I don’t think that’s going to happen, but we do have to consider the possibility.

During a recession, some sectors have historically outperformed others. Which ones?

A guide on navigating recessions by Capital Group puts this information into an easily digestible graphic: 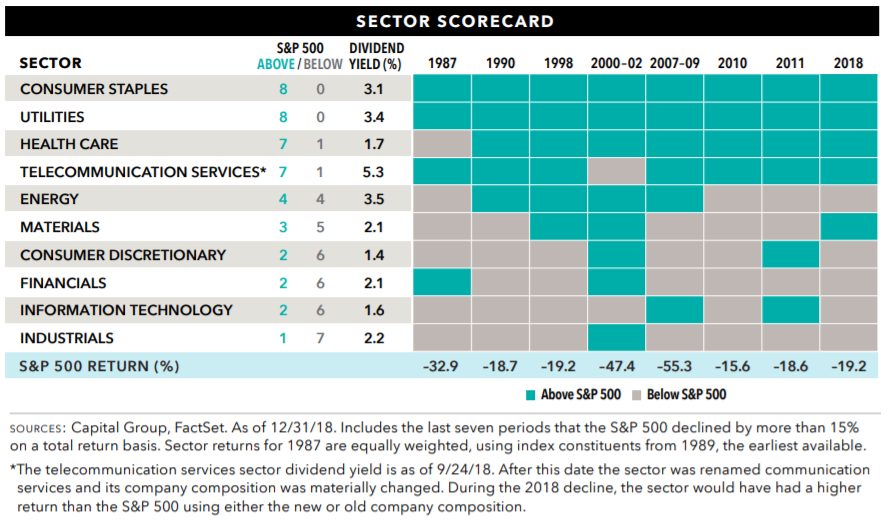 During the last eight major market declines, only two sectors have a 100% success rate in outperforming the S&P 500.

The Consumer Staples sector consists of those companies that are involved in the development and production of consumer products that cover food and drug retailing, beverages, food products, tobacco, household products, and personal products. These are the products that we can’t do without, even when times are tough. Component stocks are companies like Procter & Gamble (NYSE: PG) and Philip Morris International (NYSE: PM).

Not far behind are two other sectors that we rely on when times are tough: the Health Care sector and the Telecommunication Services sector.

As you try to figure out how to position yourselves in the months ahead, keep an eye on oil prices. They could push the U.S. into recession sooner than expected. If you want to position yourself defensively and have discretionary money to invest, those are the sectors where I would focus your dollars. But I would also point out that if high oil prices push us into recession, then energy stocks would also be a good hedge against both inflation and any recession resulting from that.

PS: Tech bellwether Apple (NSDQ: AAPL) is reported to be working on a fully autonomous self-driving vehicle. The potential investment profits are huge. Make one simple investment move today and you’ll lock in your shot at a huge payday when Apple drops its bombshell news about the Apple Car. For details, click here now.