The Bullish Case (Without the Bull)

“Thousands of experts study overbought indicators, head-and-shoulder patterns, put-call ratios, the Fed’s policy on money supply…and they can’t predict markets with any useful consistency, any more than the gizzard squeezers could tell the Roman emperors when the Huns would attack.” — Peter Lynch

The ancient Romans were a superstitious and pagan people, seeing portents in a wide variety of objects, both inanimate and living. Notably, they believed the future could be told from animal remains. The Romans were easily frightened or encouraged by the slightest omens. The same goes for modern-day Wall Street.

Below, I’ll cut through the mumbo-jumbo you hear from the financial world’s self-anointed soothsayers, and provide straight talk about what’s currently driving markets. You might be surprised to learn that I think the bullish case is intact.

Stocks launched a powerful rally last week that carried into Tuesday, which is remarkable considering the raging war in Eastern Europe, rising interest rates, and the lingering pandemic. U.S. stocks took a breather Wednesday and closed lower. Global equities did the same.

However, in pre-market futures contracts Thursday, U.S. stocks were trading sharply higher. It has become a familiar pattern in recent weeks: stocks slump, then bargain hunters swoop in to buy on the dips.

Crude oil has resumed its ascent, as the European Union discusses ways to reduce reliance on Russian oil and gas.

Ten-year Treasury yields have been trending upward over the past week, as markets factor in the Federal Reserve’s increasingly hawkish stance. The Fed is making prudent decisions regarding inflation, but it’s unlikely that the U.S. central bank will act aggressively to the point of torpedoing the economic recovery.

Underlying fundamentals remain strong, but volatility should continue into the foreseeable future. Until we see clarity on the Russia-Ukraine war, and encouraging data on inflation, the market’s roller-coaster action is here to stay.

That said, U.S. gross domestic product is on track for above-average growth in 2022, largely due to a consumer who’s still in the mood to spend. The economic recovery continues apace, and people are flush with jobs and savings. Americans say they hate the economy, but they’re spending as if they love it.

From a humanitarian standpoint, the headlines from Eastern Europe are heartbreaking. We’re witnessing nothing less than war crimes, perpetrated by Mr. Putin. But solid corporate earnings, low unemployment, robust wage growth, and high household savings should keep the economy and by extension the stock market afloat.

You need to maintain a diversified portfolio and rotate toward stocks that are tapped into trends with long-term momentum. Make sure your portfolio has exposure to the energy sector.

Soaring crude oil prices and a fast-mending economy are helping the energy sector post the stock market’s biggest gains so far in 2022 (see chart, compiled by Yardeni Research, with data as of March 23): 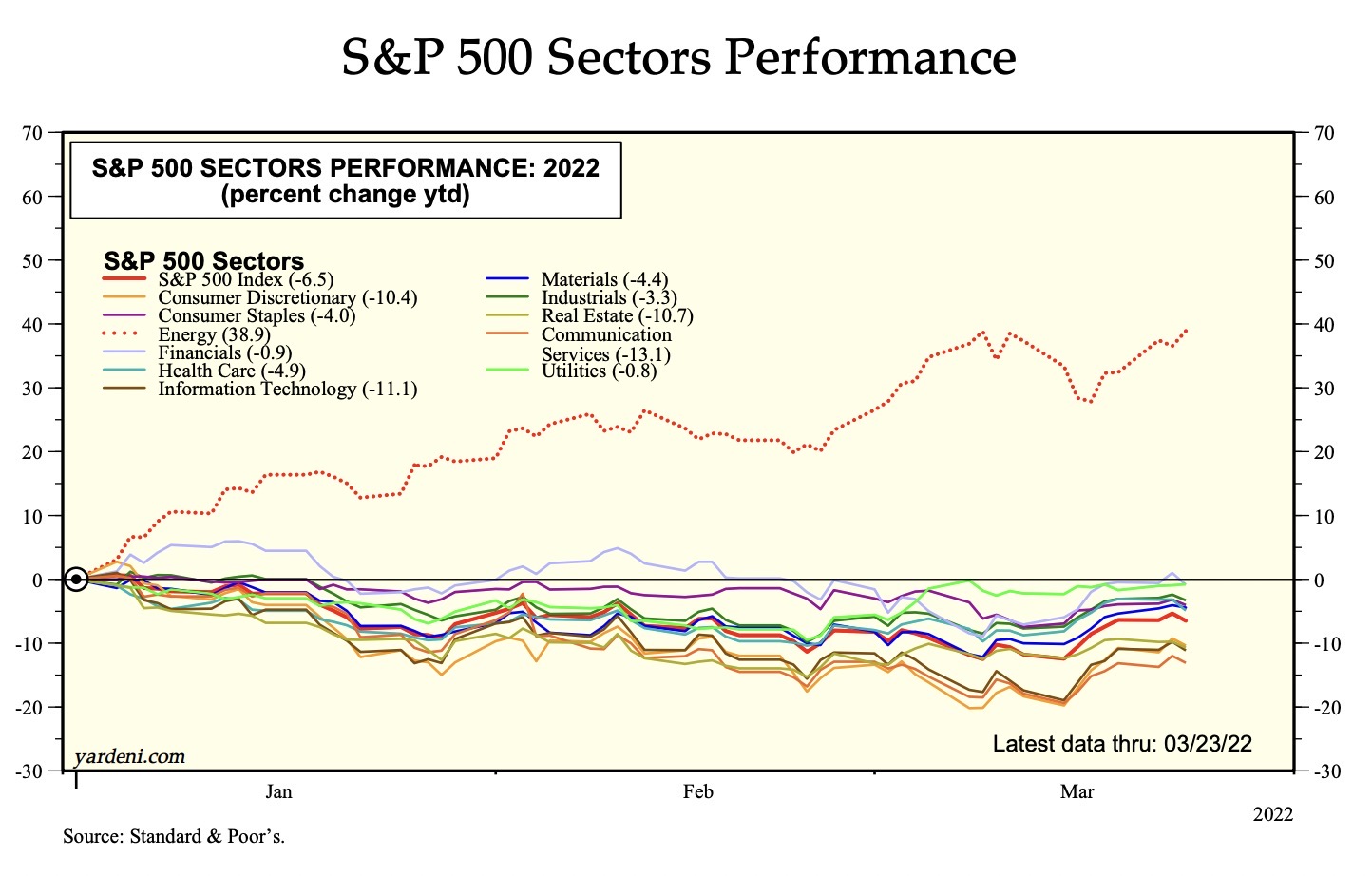 Because MLPs must distribute at least 90% of their income to investors, their payouts are high and rising, averaging more than 5% annually. And since MLPs are transporters and processors, their business model does not depend on energy prices, but rather on the volume consumed. And that volume is burgeoning.

In the meantime, are you looking for the next big investment opportunity? Corporations are sitting on mountains of cash and they’re about to unleash a “feeding frenzy” of merger and acquisition activity.

You can profit from the takeover boom, by following the advice of my colleague, Nathan Slaughter, chief investment strategist of Takeover Trader. Gain instant access to his insights, by clicking here now.