Drones: The Big Winners of the Russia-Ukraine War

Russian President Vladimir Putin greatly miscalculated by invading Ukraine and his armed forces are suffering astonishing losses. The raging conflict in Eastern Europe appears to be a no-win quagmire for both sides, but I detect at least one big winner: drone makers, exemplified by AeroVironment (NSDQ: AVAV).

Your portfolio needs exposure to the aerospace/defense sector; AVAV is an optimal choice.

Also creating tailwinds for the drone industry is America’s withdrawal from Afghanistan. It has been 20 years since Al-Qaeda’s 9/11 terrorist attacks on America, planned and guided from Afghanistan, that brought in U.S. forces that dislodged the Taliban from power and temporarily drove out Al-Qaeda. But the U.S. presence remains in that region, in the form of drones.

Just as the quagmire of a bygone era, the Vietnam War, was called “the helicopter war,” the Russia-Ukraine and Afghan engagements rightfully could be called “the drone wars.”

The Pentagon doesn’t have boots on the ground in Ukraine or Afghanistan, but instead of uniformed human beings, high-tech weaponry is doing the job, especially drones. And therein lays a huge investment opportunity…and it seems to be one that Wall Street is missing.

Imagine if you had the prescience, back in the early 1960s during the beginning of America’s direct involvement in Vietnam, to increase your investment exposure to helicopter makers. In my mind, a similar situation exists with drone makers in the context of today’s warfare.

The strife in Ukraine and Afghanistan are huge profit catalysts for the drone industry, and the financial media are hardly paying attention.

With America’s official withdrawal from the “graveyard of empires,” the Pentagon brass wants bases for troops, drones, bombers and artillery to keep the Taliban at bay, and conduct surveillance of other extremists.

In Ukraine, drones from the U.S. and Western allies are helping the outnumbered Ukrainians repel the much larger Russian invasion force. NATO member Turkey, in particular, has been providing Ukraine with highly effective drones.

AeroVironment, the world’s leading manufacturer of UAVs, is your best bet on this fast-growing industry. With a market cap of $2.3 billion and based in Arlington, Virginia, the company boasts a pipeline stuffed with autonomous flying vehicles that the military brass covets.

But it’s not just war-fighters. Drones also pervade the commercial sector, as reflected by Amazon’s (NSDQ: AMZN) big investment in drone delivery. AeroVironment is a major military contractor but it would benefit the most from the mainstreaming of small-scale civilian drones, because these miniaturized UAVs are its specialty.

The following chart depicts the enormous multi-year growth ahead for commercial drones: 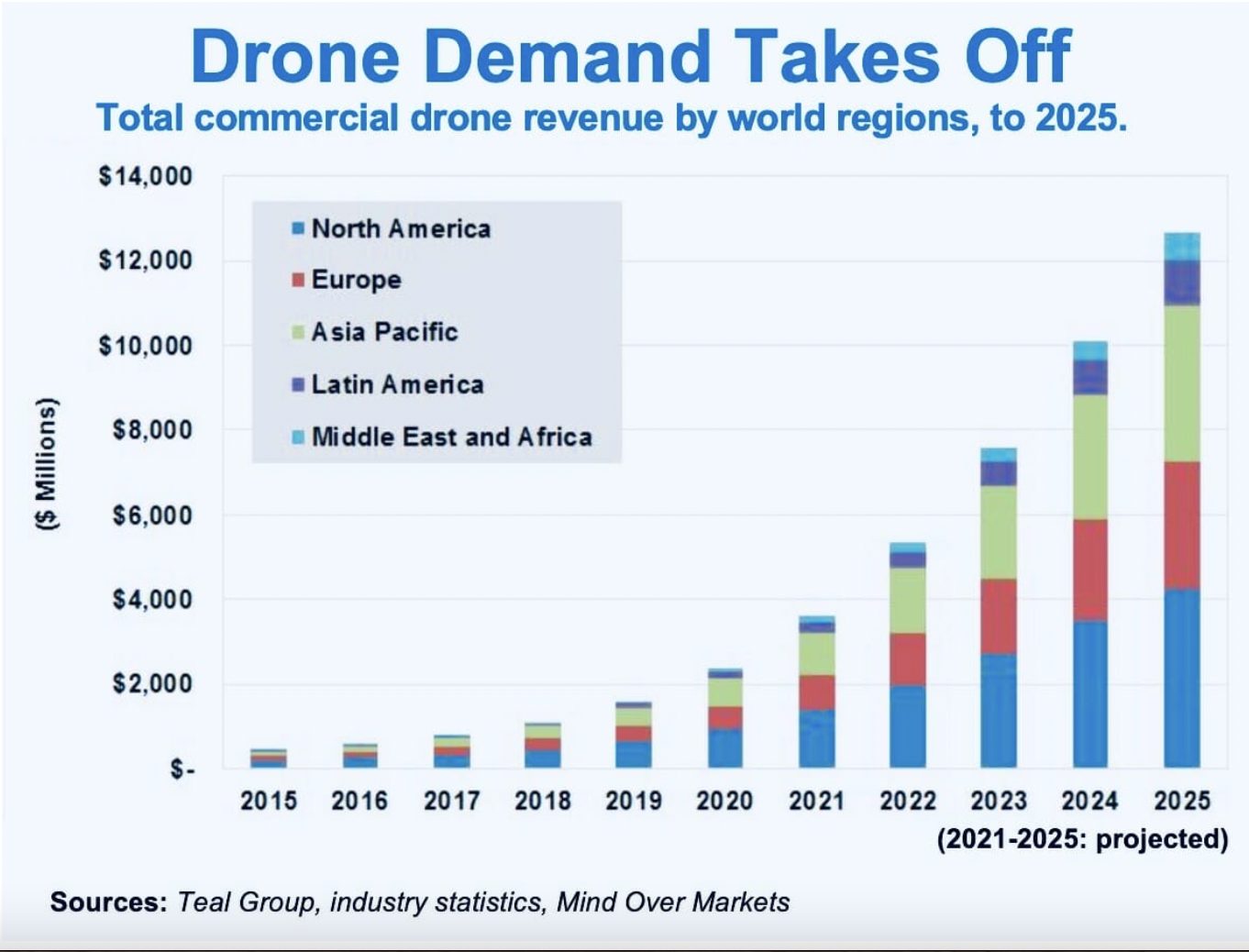 AeroVironment’s forte is making small and nimble UAVs that have the ability to carry payloads and are fitted with GPS systems and contact avoidance systems. These are the types of units that would help Amazon’s Jeff Bezos realize his bold vision of delivering packages door-to-door via drones.

Other major retailers are getting into the drone delivery business as well, especially during a pandemic era that has witnessed quarantines and huge increases in remote shopping.

Pilot-less drones are revolutionizing the projection of power around the world. Republican and Democratic presidents alike have widely deployed “hunter-killer” drones in combat theaters overseas. Since the terrorist attacks of 9/11, every U.S. administration has initiated big hikes in spending on drones.

Drones also provide a way for politicians to deploy aggressive military action, while also limiting casualties among U.S. troops. Fact is, a drone is always willing to die for its country.

AeroVironment offers a broader array of UAV products than any of its competitors, especially ultra-sophisticated drones predicated on nanotechnology.

Added incentive for investors is AVAV’s appeal as a takeover target. We’ve been seeing an explosion in merger and acquisition activity this year, notably in industries such as aerospace/defense.

Massive sums are at stake. International conflict is likely to increase this year, as Russia, China, North Korea and other antagonists of America test the resolve of the Biden administration. When the world becomes more dangerous, defense contractors get more money.

The intensifying Russo-American rivalry will be a driver of defense spending, this year and beyond. Welcome to Cold War II.

According to the data from the Stockholm International Peace Research Institute, the U.S. remains the world’s largest arms exporter. From 2016 to 2020, the U.S. accounted for 37% of global arms sales, versus 32% from 2011 to 2015. See the following chart: 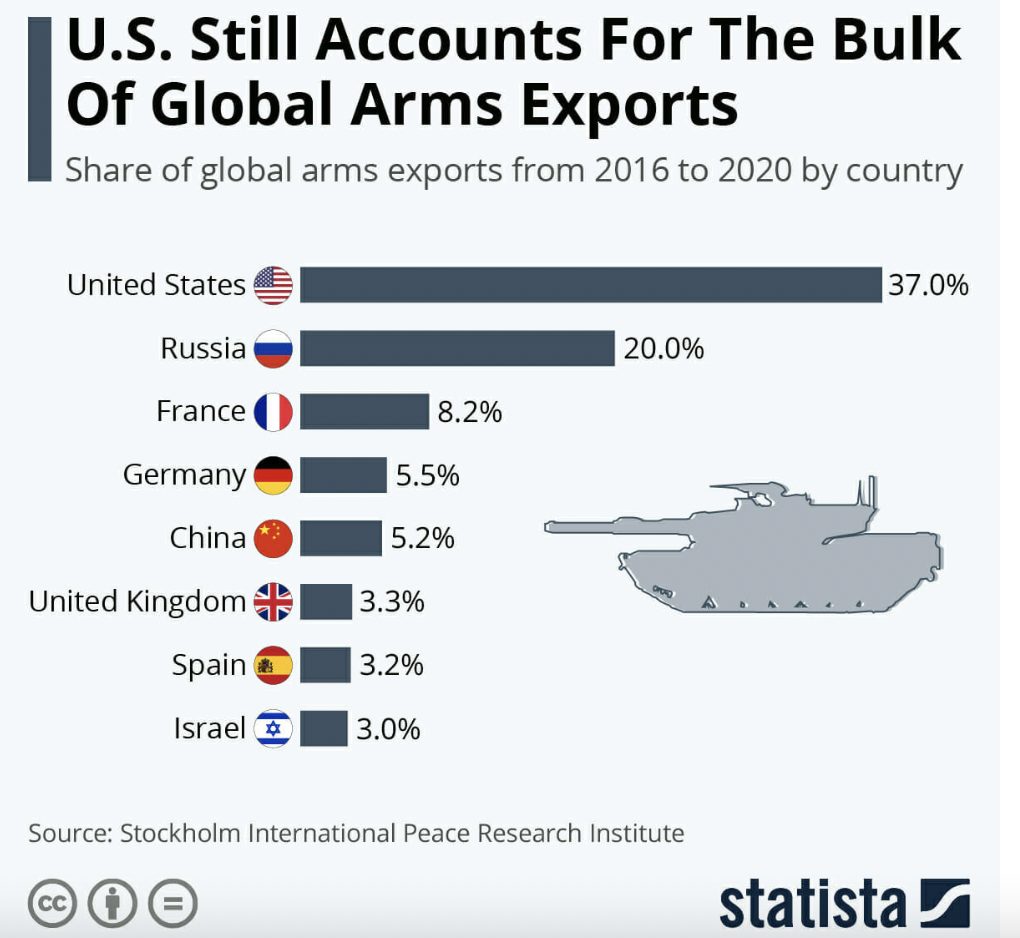 A “drone caucus” has emerged in the halls of Congress that fiercely protects UAV funding and touts these futuristic aircraft as a way to help save money on defense, better patrol America’s borders, and assist law enforcement agencies in surveillance. AeroVironment’s main office in Northern Virginia is smack dab in the middle of the Washington DC Beltway, a mecca for government lobbyists.

UAVs have become a ubiquitous feature on the 21st century battlefield. In the military sector, UAVs also benefit from the trend towards information warfare and net-centric systems. UAVs are a crucial component in the emergence of intelligence, surveillance, and reconnaissance (ISR).

Coming to your neighborhood…

According to the aerospace/defense consulting firm Teal Group, a massive civilian and para-public UAV market will emerge over the next decade, as increasing numbers of federal organizations such as the Coast Guard, Border Patrol and even the Forestry Service require airborne surveillance and monitoring systems. Local law enforcement organizations in countries around the world use drones for policing functions.

Individuals are taking to drones as well, for personal use. The number of consumers registering drones and applying for drone pilot licenses has soared, according to the Federal Aviation Administration (FAA). The agency is bracing for the likelihood of millions (yep, millions) of unmanned aircraft filling the nation’s skies.

In addition to a booming number of commercial uses for drones, such as agriculture, pipeline inspection and Hollywood film-making, scores of hobbyists are buying drones at local stores or online and taking to the skies with a passion.

NASA is working with the drone industry and the FAA to forge a new low-altitude air traffic control system specifically for drones. It’s the rise of a new subculture, spelling big future profits for AeroVironment.

AeroVironment falls just beneath the outer limit of being a small cap, which affords it greater growth potential than its rivals such as Lockheed Martin (LMT’s market cap: $121.2 billion). As the pandemic-era economic recovery picks up steam, small- and mid-caps should enjoy rapid growth.

The average analyst expectation is for AVAV’s year-over-year earnings growth to jump 205.90% in the next quarter and 29.1% next fiscal year. The stock’s forward price-to-earnings ratio is a bit pricey at 51.8, but not seriously out of whack with its growth prospects, especially in light of projections for the next quarter. The stock is on a flight path for exponential growth this year and beyond.

AVAV occupies the nexus of the aerospace and technology sectors. Looking for a tech-oriented investment that won’t crash and burn? AVAV provides outstanding growth potential, without excessive valuation. The stock is a precision investment strike.