That 1970s Economy: Deader Than Disco

The stock market gloomsters who warn of hyperinflation, or stagflation, apparently are binge watching That ‘70s Show.

Put away the polyester leisure suit. Yes, inflation is running hot and geopolitical uncertainty is a headwind, but as I’ve written in previous articles, today’s global economy is structured quite differently from 50 years ago.

Since the Middle East oil shocks of the 1970s, we’ve become less dependent on foreign oil and the economy is far more globalized (and labor unions are considerably weaker). A globalized, nonunion workforce keeps downward pressure on prices.

As I explain below, the global economic recovery should be strong enough to weather the Russia-Ukraine war and temporary supply chain imbalances.

We’ve endured a stock market slump year to date, but keep your perspective. Wednesday marked the two-year anniversary of the stock market’s COVID-induced trough. Since then, the S&P 500 and NASDAQ have doubled, and the Dow Jones Industrial Average is up about 90%.

What’s more, the latest economic data signal that the stock market rebound of recent days has staying power. We’ll continue to witness seesaw action, depending on the headlines, but Wall Street is regaining confidence.

President Biden is in Europe this week to confer with NATO allies. The White House is preparing to help European countries by expediting direct energy shipments from the West, to reduce the Continent’s dependency on Russian oil and gas. These actions are exerting downward pressure on energy prices.

The latest signs of increased activity in the manufacturing and services sectors suggest that the economic harm wreaked by an unlucky winter will largely melt away in the warmth of spring.

Purchasing Managers’ Index (PMI) data, released Thursday for both manufacturing and services in the U.S., surpassed forecasts for the month of March. The Manufacturing PMI came in at 58.5, a six-month high. The Services PMI reading was 58.9, a nine-month high. Readings above 50 signal expansion.

See the following tweet, which conveys an optimistic assessment: 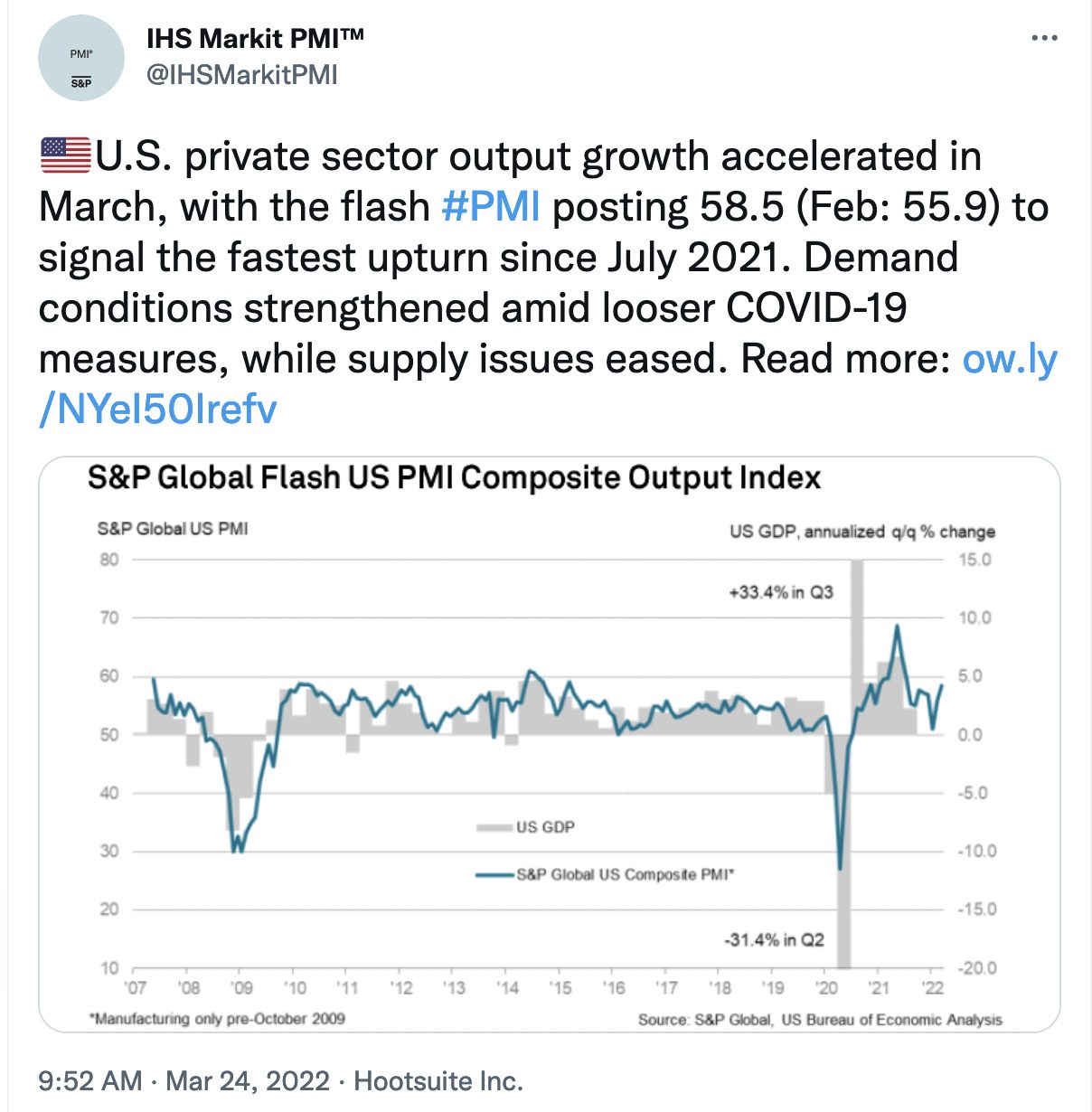 These PMI numbers reflect the U.S. economy’s greater traction in March, as the Omicron variant dissipates and unemployment continues to fall.

Read This Story: The Bullish Case (Without the Bull)

Also on Thursday, the Labor Department reported that applications for U.S. state unemployment insurance declined last week to the lowest level since 1969. Initial unemployment claims fell by 28,000 to 187,000 in the week ended March 19. The consensus estimate had called for 210,000 applications. Continuing claims for state benefits dropped to 1.35 million in the week ended March 12.

Hyperinflation reminiscent of the Ford/Carter era isn’t in the cards. The pundits sounding that alarm are political hyperpartisans who twist the facts to fit their existing beliefs.

The pandemic is fading, supply chains are mending, and the energy markets seem to be entering a more temperate period. The consensus among objective economists is that inflation will cool off in the latter part of 2022.

But inflation is nonetheless a genuine threat, and you need an inflation hedge in your portfolio. Commodities represent top-quality inflation hedges. Prices for commodities have been soaring this year and they probably have further to run.

To combat inflation, any given commodity should demonstrate two characteristics: 1) It’s geared to global growth, and 2) demand exceeds supply.

A vital commodity that fits these two criteria is copper.

The industrial world can’t function without the “red metal.” This year and beyond, as the world economy speeds up and infrastructure spending explodes, so will demand for copper. For our favorite investment play on this crucial commodity, click here now.