Trading on Wall Street has been choppy, but we can’t just blame the coronavirus pandemic anymore, or even the Russia-Ukraine war. Let’s look at the multitude of factors fueling volatility and how investors can cope.

Stocks had been trading lower Monday but abruptly made a U-turn (“banged a U-eee” as we say in my native New England) and shot higher. Stocks have been seesawing, depending on the movements of bond yields, inflation data, crude oil prices, and headlines about the conflict in Eastern Europe. The S&P 500 closed in the green for the third consecutive day. Asian and European indices also rose.

In pre-market futures contracts Tuesday, U.S. stocks were extending their gains. Chinese stocks are bouncing back from their recent battering.

Major financial stocks have been trending lower as the yield curve flattens, a dynamic that bodes poorly for bank profit margins.

A normal yield curve is one in which longer maturity bonds have a higher yield compared to shorter-term bonds, because of risks associated with time. If they sense a recession is on the way, many investors will start to invest in long-term U.S. Treasury bonds, because they’re pessimistic about the short term. Bond prices and yields move in opposite directions.

We’ve just witnessed the first five- and 10-year inversion since 2006, which was followed by the Great Financial Crisis. But past is not necessarily prologue. We’ve gotten false alarms in the past.

Also keep in mind, there’s usually a lag time of at least several months between the occurrence of an inverted yield curve and an actual recession. Indeed, the global economy is healthy and on track to post above-average growth this year.

Meanwhile, crude oil prices are starting to moderate, as supply worries ease. Take a look at the following chart: 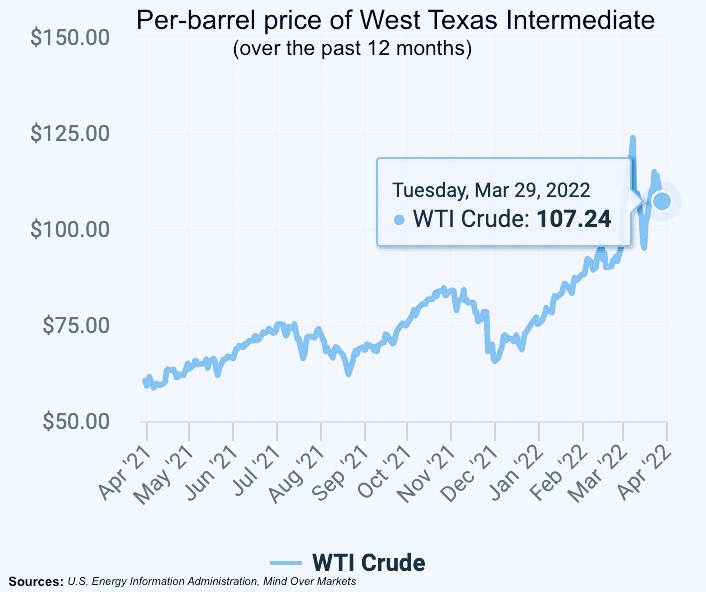 A catalyst for the dip in oil prices has been China’s lockdown in Shanghai due to a surge in COVID infections, raising concerns about the country’s economic growth and hence it’s demand for oil. China is the world’s largest importer of foreign crude oil.

What’s more, crude oil production in the U.S. expanded at a rapid clip during the first quarter of 2022, the Dallas Federal Reserve reported in its quarterly industry survey for the Eleventh Federal Reserve District, which includes Texas, northern Louisiana and southern New Mexico. The business activity index, the survey’s broadest measure of conditions facing energy firms in the district, climbed from 42.6 in Q4 2021 to 56.0, hitting its highest reading in the survey’s six-year history.

According to the survey, oilfield services firms reported greater activity and investment in production, a favorable omen for attempts to balance supply and demand and therefore rein in runaway crude prices.

Volatile energy prices have been whipsawing investors. Wall Street gets energized by energy’s comeback, only to get second thoughts as higher oil and gas prices dredge up inflation fears. This roller-coaster action is likely to continue for the rest of 2022.

Amid these tumultuous conditions, where can you find new opportunities without undue risk? Turn to my colleague, Nathan Slaughter, chief investment strategist of Takeover Trader.

Corporations are flush with cash and they’re about to unleash a “feeding frenzy” of merger and acquisition activity. The level of blockbuster corporate deals is breaking records.

You can profit from the coming chaos on Wall Street, by following Nathan’s advice. He has a knack for pinpointing big corporate deals, before they happen. Gain instant access to his latest insights, by clicking here now.