How to Profit From The Waning of Globalization

The COVID pandemic and the war in Ukraine have changed the way global supply chains work now and how they will operate in the future. As I explain below, one sector is poised to benefit in a huge way, perhaps for a long time.

Driving around the Dallas metroplex recently I’ve noticed as many warehouses under construction as there are new house and apartment complex projects. And that’s saying a lot. The Dallas/Fort Worth (DFW) area is a hotspot for transplants from other states such as California and New York, making DFW a booming area for builders these days.

Moreover, it’s happening all through the area, which as I will describe is a sign of what could be a new secular trend. This trend may prove to be both an inflation hedge as well as a potential area for long-term investment.

Readers of my articles know my love for price charts. As I often say, a picture is worth a thousand words. Let’s examine two price charts with an interesting investment story, which luckily seems to still be in its early stages of unfolding: a bullish divergence between interest rates and commercial real estate.

A Tale of Divergence

Under normal circumstances, there is little difference in the response between homebuilders and commercial real estate stocks to the trend for interest rates. Specifically, lower rates tend to boost both sectors and higher rates tend to be negative for both.

Because these REIT entities are structured to pay out most of their earnings in dividends, they attract income investors, especially when their dividends are, as they were for much of 2021, higher than those paid by U.S. Treasury bonds.

But that seems to be changing. 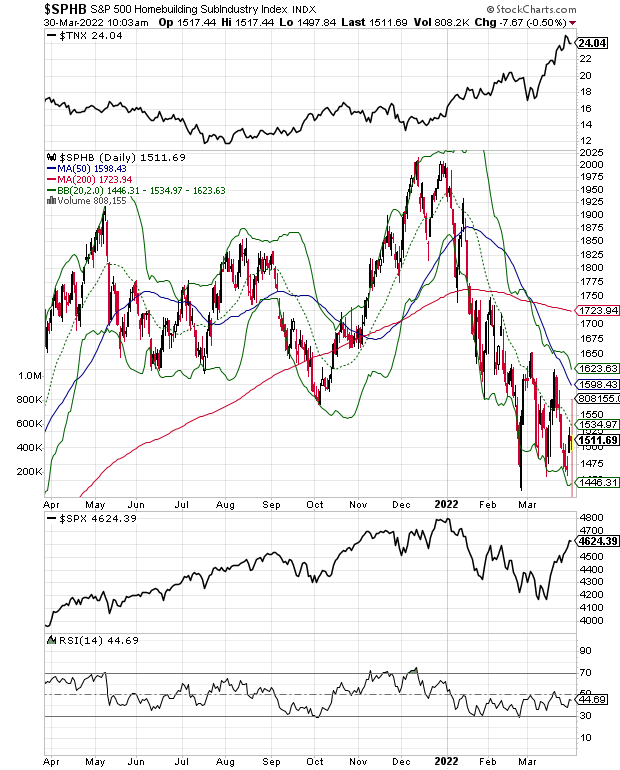 The take home message from this chart is a familiar one. Rising interest rates are bad news for homebuilders.

The second chart compares the S&P Real Estate sector (SPRE), which contains a large number of REITs, to TNX. Note the following: 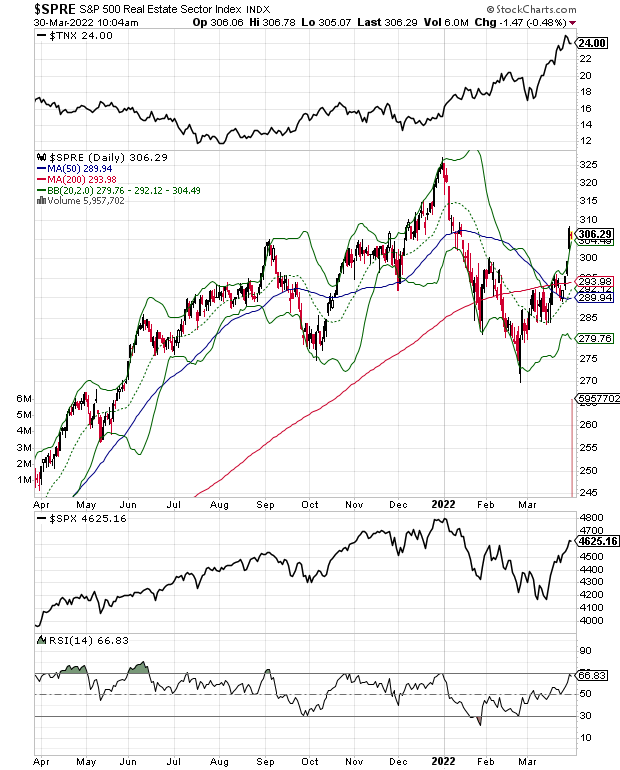 The fact that REITS are bucking a long standing trend in their relationship to rising interest rates speaks loudly. This development is potentially bullish for those interested in REITs and related investments.

There are two dynamics at play here, with the point of convergence being the supply chain problems that surfaced during the pandemic and the adjustments being made to reduce future damage.

Prior to COVID, businesses depended on the global supply chain and what became known as just-in-time shipping. This was the central concept in globalization, or the spreading out of manufacturing capacity throughout the world with the net effect being that of cutting costs by decreasing the need for inventory.

That worked well as long as factories could work on normal schedules and logistics ran smoothly. Of course, we know that COVID changed everything. And now we are seeing the system adjust.

There is a new buzzword emerging on the fringes of the investing vernacular: slowbalization. This is a secular change in the way companies operate and it’s replacing inventory management from just-in-time, which lowers costs and increases efficiency to just-in-case, which means a return to traditional supply chain management focused on large inventories and redundancies.

Globalization is being reversed and replaced by a focus on local and regional commerce built around increasing inventories and storage of goods, just-in-case of the emergence of pandemics, wars, geopolitical conflict, and other factors that disrupt commerce.

That’s why there are so many new warehouses popping up in the DFW area, as investors are seeing the steady reversal of the global phenomenon.

Certainly, I am not predicting the end of global trade. But it’s clear that things are changing as the world slowly recovers from the pandemic, returning to more “normal” operation. As a result, demand for all things is rising while supplies are tight.

Initially, this was a direct result of pandemic factory closures, port and trucking bottlenecks, and labor shortages. Now due to the war in Ukraine, the situation has become critical, and companies have been forced to speed up timelines and alter their operations rapidly in order to adjust, and in many cases survive.

Indeed, we are witnessing a reversal to older models of supply chain dynamics, with warehouses becoming central cogs in the new machine.

Even in the face of rising interest rates, tech selloffs, overseas war, and anything else Mr. Market throws at you, Robert’s trades are income-generating machines. Click here now for details.