Get Ready For The Next Great Growth Story

Two years ago, the stock market crashed hard in the wake of the coronavirus pandemic. At the time, emotions were running high and confidence was low.

On March 23, 2020, the S&P 500 Index bottomed out below 2,200. One week later, I advised my readers to start loading up on what I believed at the time was an oversold stock market.

Given the indiscriminate nature of that selloff, I didn’t see the advantage of taking a contrarian approach. Instead, I advised using a few broadly diversified sector funds to participate in a stock market recovery.

Specifically, I suggested buying the SPDR S&P 500 ETF Trust (SPY), Technology Select Sector SPDR Fund (XLK), and iShares S&P Global Healthcare ETF (IXJ). The way I saw it, there was no way the stock market could recover without those funds leading the way.

If you had the courage to step up and buy into the stock market at that time, you have been handsomely rewarded. But many investors did not, opting instead to put their money into alternative assets such as gold.

That hasn’t worked out nearly as well. Over the past two years, the SPDR Gold Trust (GLD) has appreciated just 23%.

However, had you bought the iShares MSCI Global Gold Miners ETF (RING) at that time your total return would have been 73%. Even better, the Fidelity Global Commodity Stock Fund (FFGCX) gained 210% over the same span.

Companies run by intelligent businesspeople tend to outperform static asset categories by a sizable degree. That means you’ll probably be better off buying common stock in companies that produce those assets rather than own the assets themselves.

When you look at it that way, selecting stocks becomes a two-step process. First, identify asset classes that are likely to appreciate more than others. Second, search for businesses that derive most of their income by producing those assets.

Sounds simple, right? And it is, except for being able to accurately predict the future. That’s the tricky part.

The good news is I don’t have to be able to predict the future. At least, not to that degree. Instead, I can draw inferences based on trends that are likely to remain in place for the foreseeable future.

One trend that I believe will accelerate in the years to come is 5G (fifth-generation) telecommunications technologies. According to Grand View Research, “The global 5G services market size was valued at USD 47.3 billion in 2021 and is expected to expand at a compound annual growth rate (CAGR) of 52.0% from 2022 to 2030.” 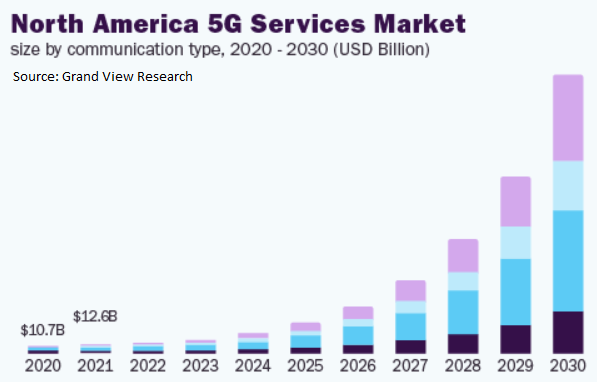 That is an astonishing projection. At a CAGR of 52%, the 5G services market will expand by more than 2,800% by the end of this decade!

Sure, that number might be off a little. But it could off by a lot and still dwarf the growth rates of just about every other sector of the economy.

Ready to Take Off

If you’re risk-averse and unfamiliar with the 5G market, you can own most of the 5G space via the Defiance 5G Next Gen Connectivity ETF (FIVG). Its top three holdings are Advanced Micro Devices (NSDQ: AMD), Analog Devices (NSDQ: ADI), and Qualcomm (NSDQ: QCOM).

So far this year, FIVG has fallen along with the overall stock market. Also, a shortage of semiconductors has temporarily limited production.

Those supply chain bottlenecks will eventually be resolved. And when they are, this fund could take off. There is simply too much money at stake for this sector to stay down much longer.

That’s the easy way to do it. But I know of an even better way to participate in the future growth of 5G. After months of research, our investment team has found an exciting 5G play that’s poised to crush the market. Click here now for details.