I’ve worked as a staffer for politicians, who taught me an important lesson about human nature: most people don’t follow the news very closely. They typically vote by their emotions, not by intellectual analysis.

So when consumer prices start to rise, the public’s response tends to be delayed and based on anecdotal experience. Average citizens don’t learn about inflation by reading Paul Krugman. They feel inflation, at the grocery store or the gasoline pump.

I’ve been feeling inflation at the coffee pot. My caffeine addiction is getting more expensive. In March 2022, the average retail price for a pound of coffee was $5.4, compared to $5.2 in February, an increase of about 3.9%. Higher shipping costs are mostly to blame.

I brew my coffee at home. Inflation is starting to hit home with lots of other folks, too. That spells trouble for the stock market.

According to the latest consumer price index (CPI), released April 12 by the U.S. Bureau of Labor Statistics (BLS), the CPI jumped 8.5% in the year through March, the fastest inflation rate since 1981 (see chart). 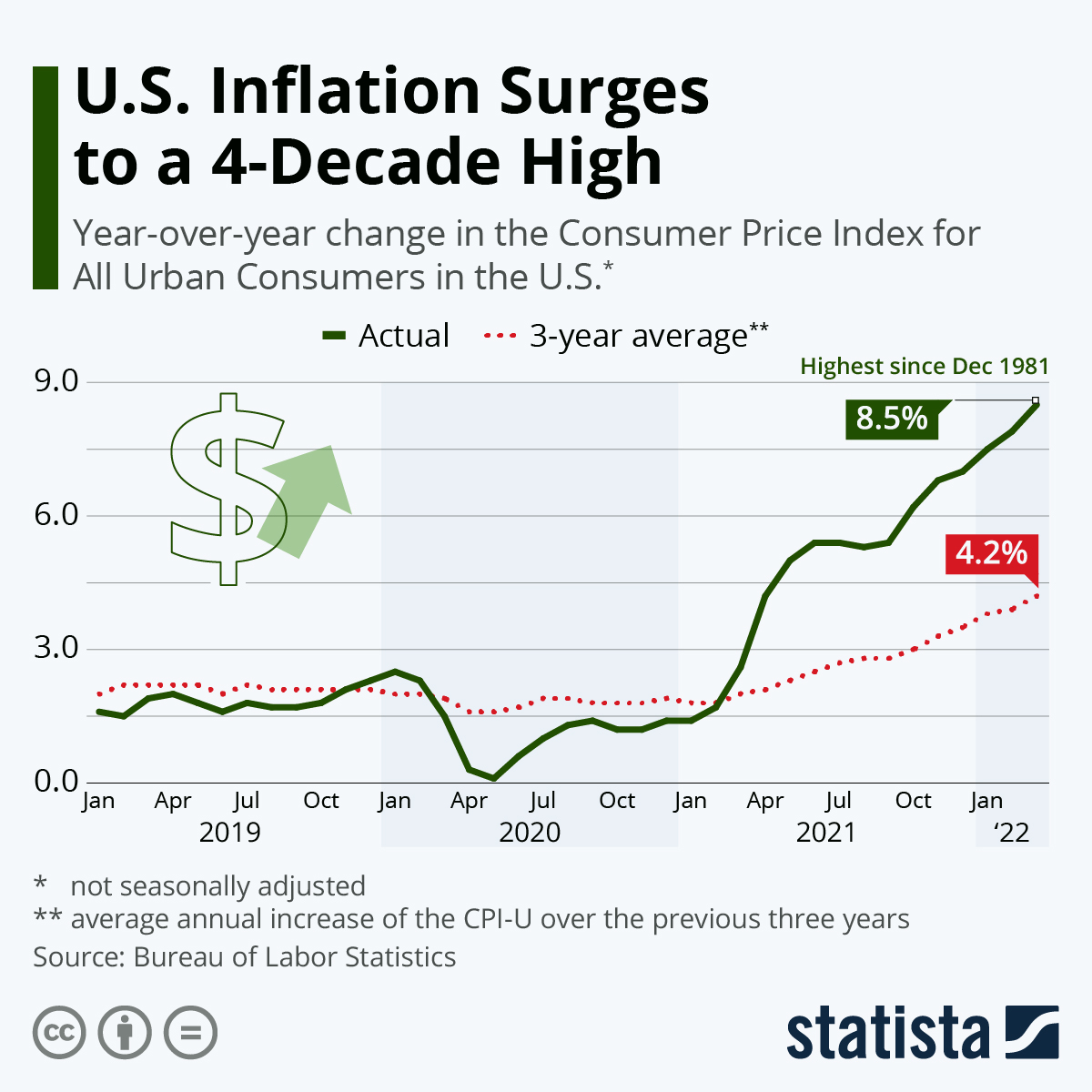 The indices for energy and food rose 32% and 8.8%, respectively, on a year-over-year basis. The all items less food and energy index, the so-called core rate, rose 6.5% on a yearly basis.

On Wednesday, the BLS reported that the prices that goods and services producers receive soared in March at the fastest pace since records began in 2010.

The producer price index (PPI), which measures prices paid by wholesalers, jumped 11.2% from a year ago. On a monthly basis, the PPI increased 1.4%, surpassing the consensus estimate of 1.1%.

PPI is a leading indicator of inflation, because it gauges wholesale prices in the pipeline for goods and services that eventually reach consumers.

In early trading Wednesday, the major U.S. stock indices were in the green, as investors awaited first quarter 2022 earnings reports, with big banks kicking off the season.

The financial sector is in focus due to the rise in Treasury yields and the increasingly hawkish Federal Reserve. Higher interest rates are beneficial for banks, but hotter inflation and rising rates also translate into reduced consumer spending and demand for loans.

JPMorgan, a component of the Dow, reported that its Q1 earnings declined by 42% compared to the same quarter a year ago. The largest U.S. bank by assets, JPM cited its exposure to Russia as a continuing liability.

Overseas, European equities have been under pressure, amid the economic danger posed to the Continent by sanctions against Russia.

European countries, particularly Germany, are heavily dependent on Russia for oil and gas. As the Russia-Ukraine war worsens, crude oil and gold have been rallying. Treasuries have been moving higher, with the benchmark 10-year U.S. Treasury hovering at 2.73%.

For Q1, research firm FactSet estimates that year-over-year EPS growth will come in at 4.5%, which would represent the lowest rate of EPS growth since Q4 2020.

The continuing struggle of employers to get competent employees also is driving inflation. During pandemic lockdowns, millions of Americans saved money and reevaluated their personal priorities. They’ve gotten pickier about their careers, which has forced employers to entice them with more generous offers.

FactSet searched for specific terms related to several factors (e.g. “inflation” and “labor”) in the conference call transcripts of the 20 S&P 500 companies that conducted Q1 earnings conference calls through April 7.

FactSet then searched to see if the company cited a negative impact. The results for Q1 and a comparison to the same period in Q4 are shown in the chart below: 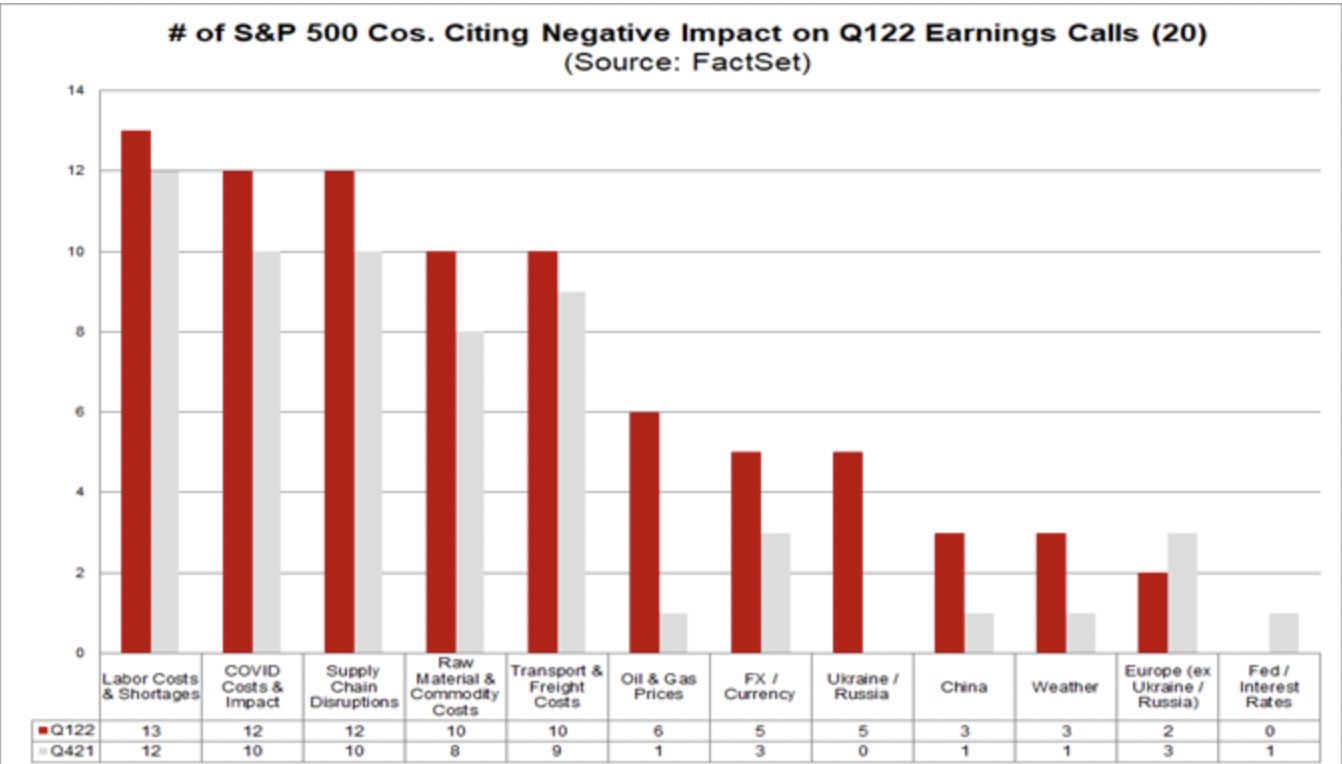 To date, 65% of S&P 500 companies are citing the negative impact of labor costs and shortages on Q1 earnings calls. The trend is likely to get more pronounced as earnings season progresses.

This employment dilemma is especially acute for small businesses, which possess less wherewithal to boost worker compensation and benefits. Accordingly, small-cap equities have been leading the market down.

How should you invest under the risky conditions I’ve just described? Consider the advice of our premium publication, Rapier’s Income Accelerator, helmed by my colleague Robert Rapier.