The Sum of All Investing Fears

Russian President Vladimir Putin is threatening to use nuclear weapons in Eastern Europe. Ukrainian President Volodymyr Zelensky takes him seriously, warning last Friday that the world should prepare for Russia to use nukes as part of its continuing assault.

We’re facing the worst nuclear threat since the Cuban Missile Crisis in 1962. At the same time, consumer and producer price indices hover at multi-decade highs.

Against this fraught backdrop, I examine proactive measures that can shield your wealth and simultaneously tap growth.

The interrelated factors of war and inflation are pressuring stocks. The New York Stock Exchange and NASDAQ were closed April 15 in observance of Good Friday. From an investment standpoint, there wasn’t much to celebrate (see table). 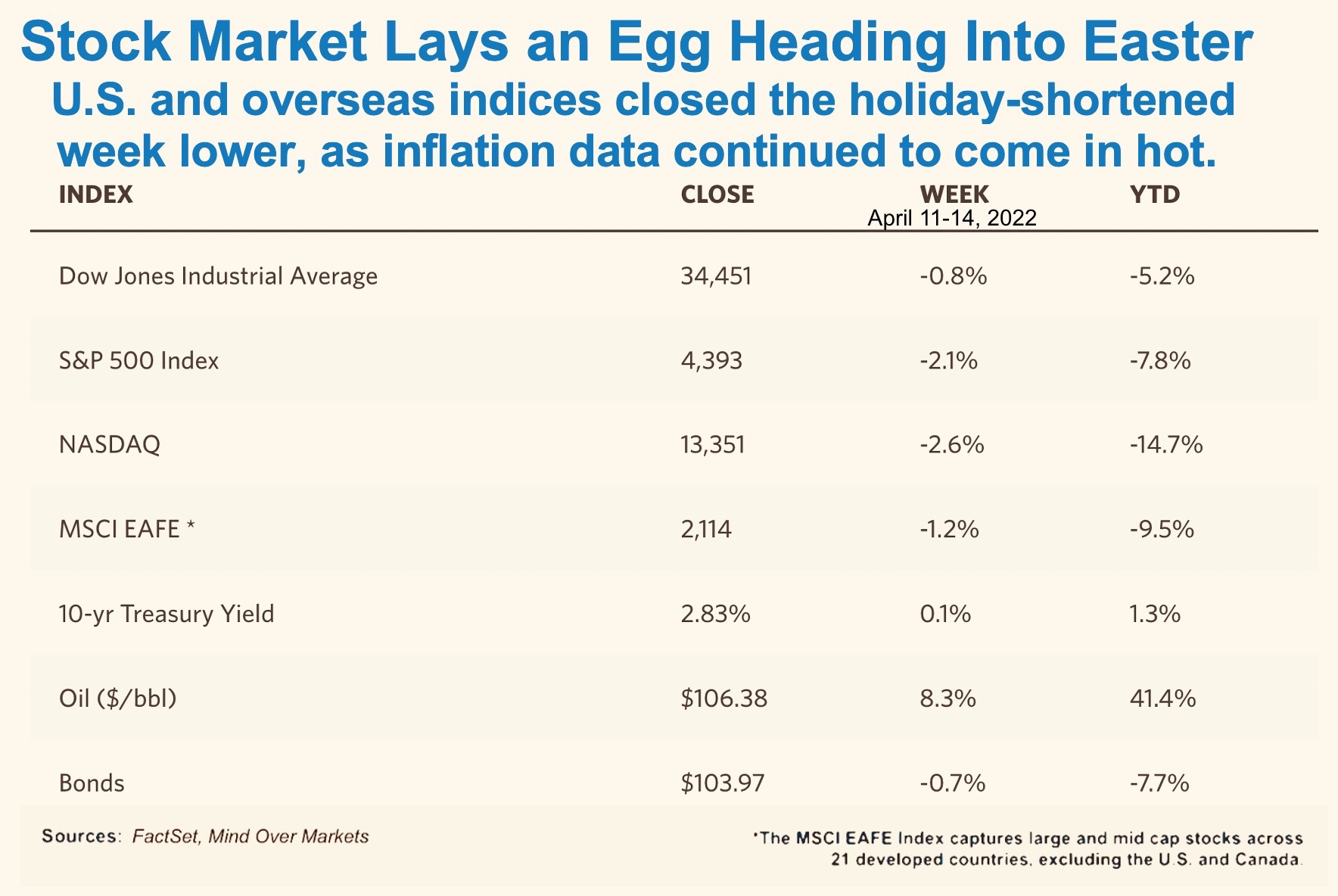 Read This Story: As Inflation Soars, Look for Pricing Power

As you can see from the above table, the benchmark 10-year Treasury yield hovers at 2.83%. The yield could possibly hit 3.0% this year, but I doubt it will move significantly beyond that threshold, especially if inflation slows down.

We’re seeing signs that maybe (just maybe) inflation is cooling. Supply-and-demand is moving toward equilibrium and higher interest rates are softening high-flying sectors such as housing. Seaports are reporting less gridlock and intermodal transportation is proving resourceful in moving goods.

The prices of crude oil and other commodities ascended from late February through March, but they appear to be moderating so far in April (see chart). 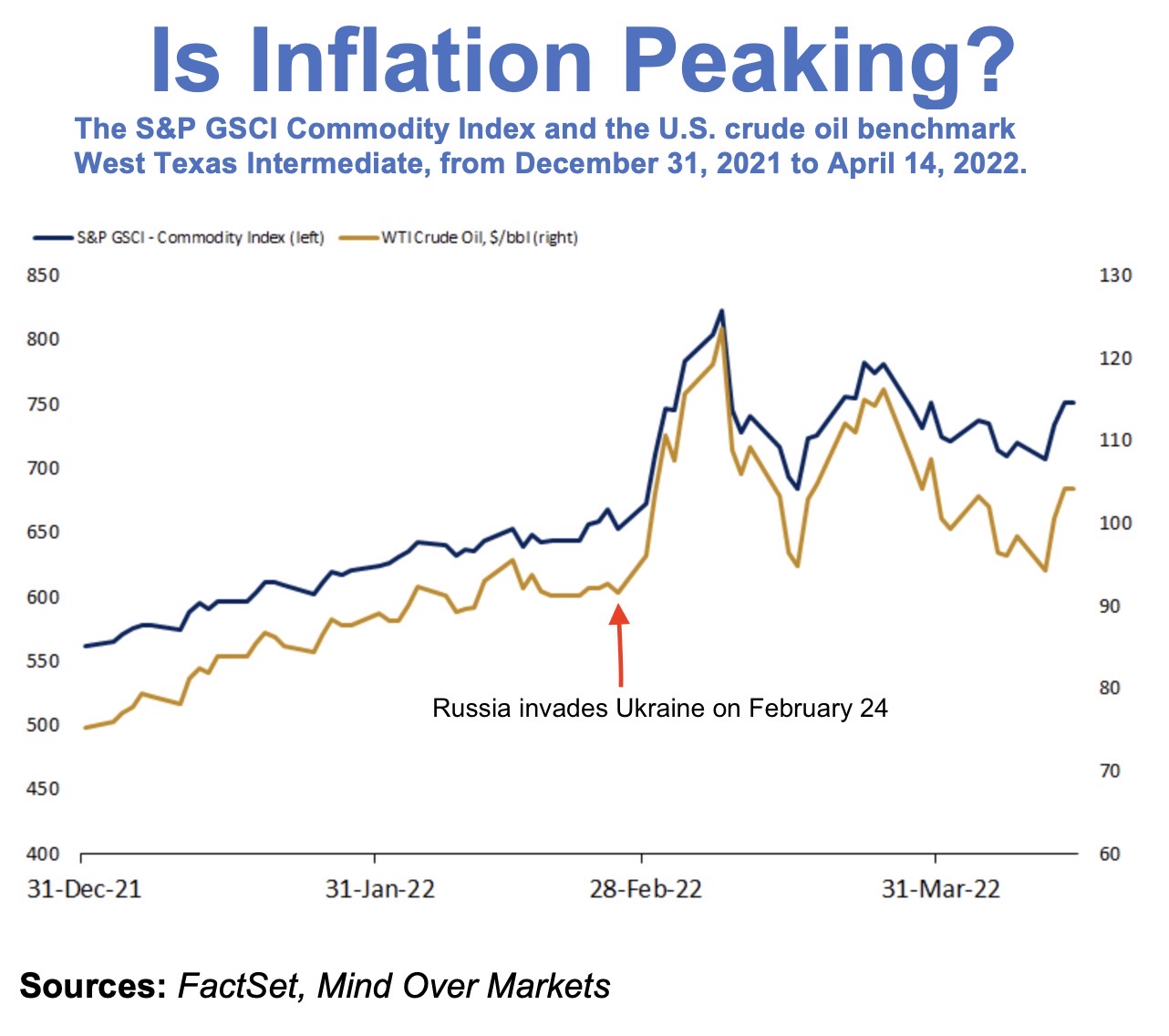 We probably won’t see inflation wane until the second half of 2022. The producer price index (PPI) is forward-looking and its latest high reading suggests that for the next few months at least, inflation will remain elevated.

It’s not all doom-and-gloom. In positive economic news, the U.S. Bureau of Labor Statistics (BLS) reported last Friday that March unemployment rates had dropped in 37 states while remaining stable in the other 13 states and the District of Columbia.

Compared to March 2021, “all 50 states and the District had jobless rate decreases,” noted the BLS report. The national unemployment rate, 3.6%, declined by 0.2 percentage point over the month and was 2.4 points lower than in March 2021.

The Russia-Ukraine conflict has evolved into the gravest threat. There’s no way to protect your wealth against nuclear war. If it breaks out, it’s game over for humanity. But you can gird your portfolio against the volatility that’s stirred by the fear of Armageddon.

Vladimir Putin was humiliated last week by Ukraine’s sinking of Russia’s prized naval flagship Moskva. The guided missile cruiser, worth $750 million, was the crown jewel of Putin’s fleet. It now sits at the bottom of the Black Sea.

When thin-skinned megalomaniacs like Putin are embarrassed, they lash out. Echoing Zelensky, U.S. intelligence is warning that the increasingly desperate Russian dictator might resort to battlefield nukes in Eastern Europe. Putin controls the world’s largest stockpile of nuclear weapons.

Investors will remain on edge for the duration of the Russia-Ukraine conflict, which could drag on indefinitely. The war is fueling inflation, by jacking up energy prices and causing global shortages of vital goods, notably food.

The Ukrainians have held back larger Russian forces by resorting to asymmetrical warfare. They’re destroying Russian tanks, ships, and planes by deploying nimble tactical units armed with high-tech weaponry such as drones and shoulder-fired missiles.

Cybersecurity stocks are positioned to thrive as well. As an ex-KGB colonel trained in disinformation, Putin has made cyberwarfare a hallmark of his regime. Since invading Ukraine, he has intensified cyberattacks around the world.

Putin and his minions warned that if the Swedes and Finns join NATO, Russia would move nuclear weapons to the Baltic region.

Several wealthy European nations (e.g., Germany) are about to embark of a weapons shopping spree. U.S.-based defense contractors, which dominate the global arms race, stand to benefit the most.

Your portfolio should also contain gold. The value of gold tends to increase as the purchasing power of the dollar declines. Geopolitical strife also is favorable for the yellow metal.

My preferred way to profit from rising gold prices is through small-cap miners that put operating leverage to work. Our investment team has pinpointed a junior gold miner that’s poised for exponential gains. For details, click here.