Black Swan Investing: How to Turn Chaos Into Profits

Investors are contending with not just one black swan, but a bevy of them. Amid the chaos, though, there’s a booming industry that can still provide resilient growth. This investment opportunity is often referred to as the “green rush.” More about that in a minute.

The global economy is projected to slowdown in 2022, as the Russia-Ukraine war, elevated inflation, rising interest rates, and the persistent pandemic all converge to generate powerful headwinds.

The headlines about war, pestilence and economic disarray are pressuring equities. The major U.S. stock market indices closed mixed Wednesday, performing as follows: the Dow Jones Industrial Average +0.71%; the S&P 500 -0.06%; the NASDAQ -1.22%; and the Russell 2000 +0.37%.

The technology-heavy NASDAQ got caught in the downdraft by shares of streaming giant Netflix (NSDQ: NFLX). In bleak first-quarter operating results Wednesday, Netflix revealed that it lost subscribers for the first time in a decade. In Q1, roughly 600,000 subscribers in the U.S. and Canada canceled their Netflix subscriptions. The company cited easing COVID restrictions and steeper competition. NFLX plunged by 35.12%, dragging down its major media rivals as well.

According to research firm FactSet, the blended year-over-year Q1 2022 earnings growth rate for the S&P 500 is 5.1%. As of this writing Thursday, the percentage of S&P 500 companies beating earnings estimates is equal to the five-year average.

That said, the global economy faces a perilous period. The torrid pace of inflation is exacerbated by the Russia-Ukraine war. Both events were unexpected, and they’re now intertwined.

The reemergence of COVID in China also comes as a surprise. The country’s strict response to rising infection rates is another drag on global growth. With major industrial centers under lockdown, China’s economy is showing signs of sputtering.

Read This Story: Headwinds for the Red Dragon?

The International Monetary Fund reported Tuesday in its World Economic Outlook that global economic activity is on track to slow this year to 3.6%, compared to 6.1% in 2021. That’s a dramatic downgrade from the IMF’s forecast in January of 4.4% growth this year (see chart). 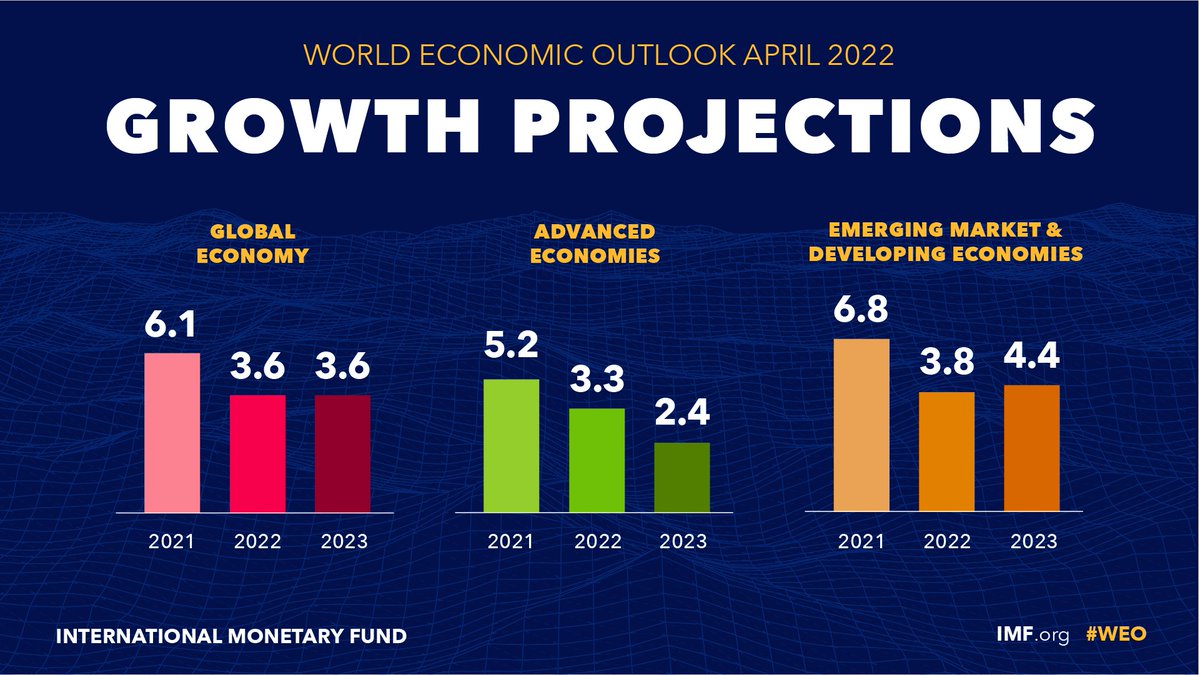 The IMF stated: “Global economic prospects have been severely set back, largely because of Russia’s invasion of Ukraine. This crisis unfolds as the global economy has not yet fully recovered from the pandemic.”

The IMF also noted that war-caused commodity price increases and shortages have prompted 2022 inflation projections of 5.7% for advanced economies and 8.7% for emerging market and developing economies, 1.8 and 2.8 percentage points higher, respectively, than projected in January 2022.

Western sanctions against Russia, and the destruction wrought by the war, are taking their toll. The IMF expects the Ukrainian economy to shrink by 35% this year, and Russia’s economy to contract by 8.5%.

The World Bank also issued dour forecasts this week, lowering its forecast for global growth in 2022 from 4.1% to 3.2%.

The adverse consequences of the Russia-Ukraine conflict on the global economy are at the top of the agenda as policymakers gather this week in Washington, DC for the annual spring meetings of the International Monetary Fund and the World Bank.

Light up your portfolio…

Looking for investment growth, despite the risks I’ve just described? Turn to the thriving marijuana industry, aka the green rush. Pot stocks are on fire. And with laws against marijuana continuing to fall by the wayside, the momentum for marijuana-related investments should continue for the rest of this year and beyond.

Some cannabis stocks are quality investments. Many others are not. You need to conduct due diligence. I’ve done the homework for you, in my new book: The Wide World of Weed and Psychedelics.

The product of years of painstaking research, my book is your one-stop primer for cashing in on the marijuana and psychedelics revolution. Click here to claim your free copy.