This past Wednesday, millions of people from all walks of life celebrated 420, aka “Weed Day,” with rallies and parties around the world in honor of marijuana.

The international holiday also is called “Weed O’Clock.” As the story goes, the numerals 420 derive from the time in the afternoon when a group of high school kids in the early 1970s got together to smoke pot.

There’s even an online clock for stoners that shows where it’s 4:20 in the world. If it’s not currently 4:20 somewhere, the clock shows a countdown to the next 4:20 and where it will occur.

With another annual Weed Day in the books, let’s examine the latest state of the states, in regard to marijuana legalization in America. The political landscape keeps getting greener.

These actions bring the total of legal adult-use states to 18, along with the District of Columbia. There are currently 37 states that have medical marijuana laws, including all that allow recreational use. The following map, with data current as of April 20, tells the story: 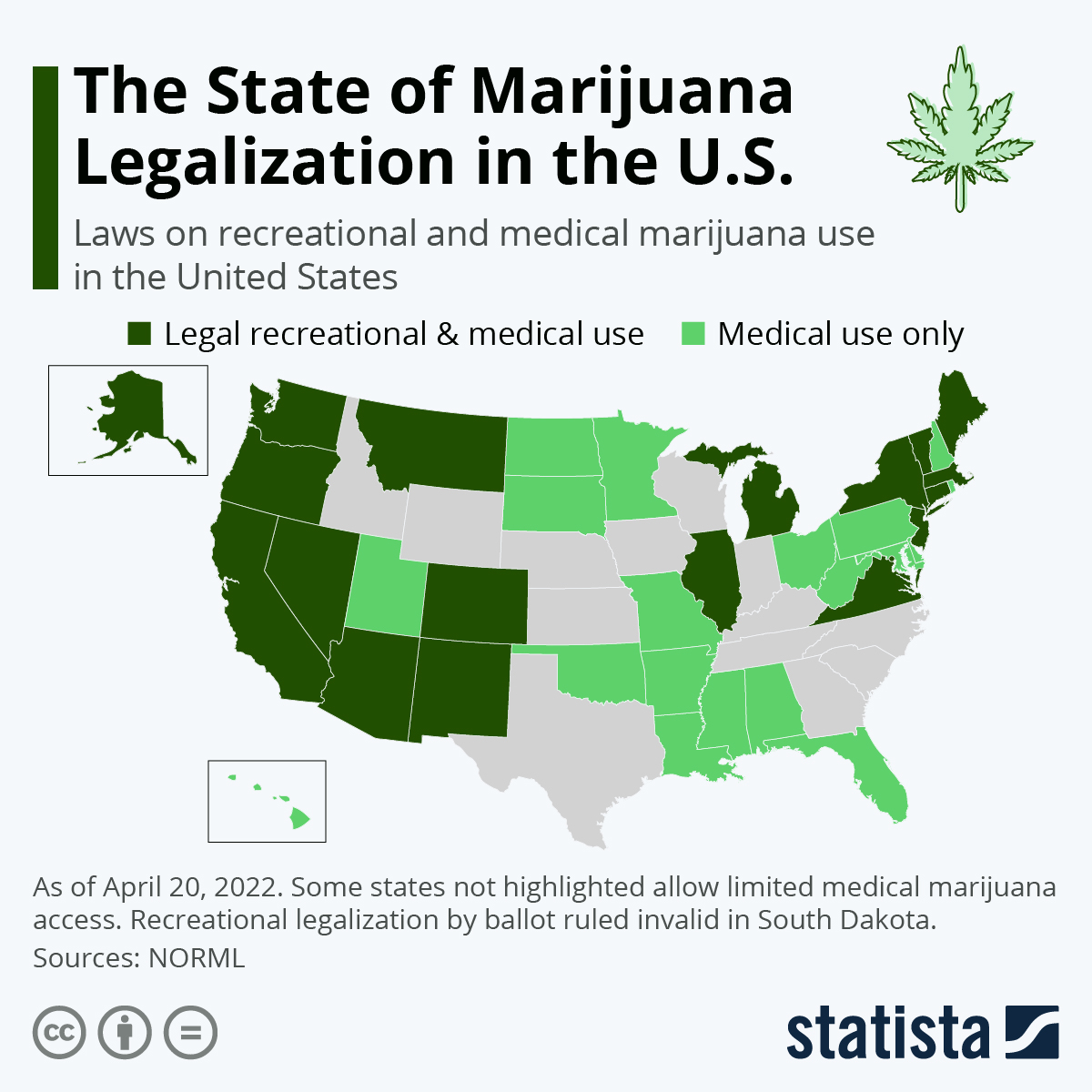 The first states to legalize marijuana were Colorado and Washington, in 2012. But the “green rush” traces its true origins to the home of the 19th century gold rush: California.

In 1996, the voters of California agreed to allow patients and their caregivers to possess and cultivate marijuana for therapeutic purposes.

Known as the California Compassionate Use Act, Proposition 215 created the country’s first open marijuana market and gave birth to the wave of state legalization laws (both medical and recreational) that have made possible a multi-billion-dollar industry.

In November 2016, California voters approved the Adult Use of Marijuana Act (Proposition 64) to legalize the recreational use of cannabis. Cannabis is the largest cash crop in California, with an annual value of more than $11 billion.

California currently is the world’s largest single marijuana market. As is often the case with other national trends, the Golden State has set the example with marijuana for the rest of the country to follow.

Recreational marijuana is increasingly legal along the eastern seaboard of the U.S., in the wake of successful legalization in Western states. The East is rising as a major regional power in the marijuana industry.

New Jersey started allowing the sale of legal weed on April 21, whereas New York, Connecticut and Virginia have yet to establish start dates and concomitant marijuana management programs.

Pot sales have been unfolding in Arizona, Montana, and New Mexico. Establishing a regulatory system for dispensary licensing usually takes several months, but possession and consumption are already legal in all states that passed bills or had successful ballot measures.

South Dakota presents a special problem. This red state shows that the pot prohibitionists haven’t given up in their battle against what they view as “the devil’s weed.”

South Dakota’s voters in the 2020 elections approved, by wide margins, the recreational and medical use of cannabis, but the state’s Supreme Court ruled the ballot measure on recreational weed invalid for technical reasons, after a legal challenge funded by Republican Governor Kristi Noem, a social conservative who remains adamantly anti-marijuana.

Your definitive guide to pot profits…

Some cannabis stocks are quality investments, but many others are too risky. You need to dig deep and analyze the fundamentals. That’s why I wrote a book: The Wide World of Weed and Psychedelics. The product of years of painstaking research, my new book is now available, in hard copy.

As they increasingly become legal around the world, cannabis and other psychotropic substances are generating huge gains for proactive investors. But the time to act is now, while these investments are still affordable.

The Wide World of Weed and Psychedelics is your one-stop primer for profiting from the booming marijuana and psychedelics industries. Click here to secure your free copy.