“Round up the usual suspects,” Captain Renault (played by Claude Rains) famously said in the 1942 film classic Casablanca.

Lately, when financial markets swoon and I look for a cause, the usual suspect is Russian President Vladimir Putin.

The autocrat has been unnerving investors, by weaponizing Russian oil and gas, launching cyberattacks against European energy infrastructure, escalating his brutal war against Ukraine, and even threatening nuclear war.

Strong corporate earnings, from bellwethers such as Microsoft (NSDQ: MSFT), have been keeping a floor under stocks. After Tuesday’s sharp selloff, U.S. stocks closed mixed Wednesday, as follows: the Dow Jones Industrial Average +0.19%; the S&P 500 +0.21%; the tech-focused NASDAQ -0.01%; and the small-cap Russell 2000 -0.34%.

In pre-market futures contracts Thursday, the indices were trading sharply higher. Markets are likely to remain volatile for the duration of the Russia-Ukraine war. Tit-for-tat retaliatory measures between Putin and the West are bringing new and unexpected investment risks on a daily basis.

Seesawing crude oil prices are on the ascendancy again, amid deepening chaos in the energy sector (see chart). 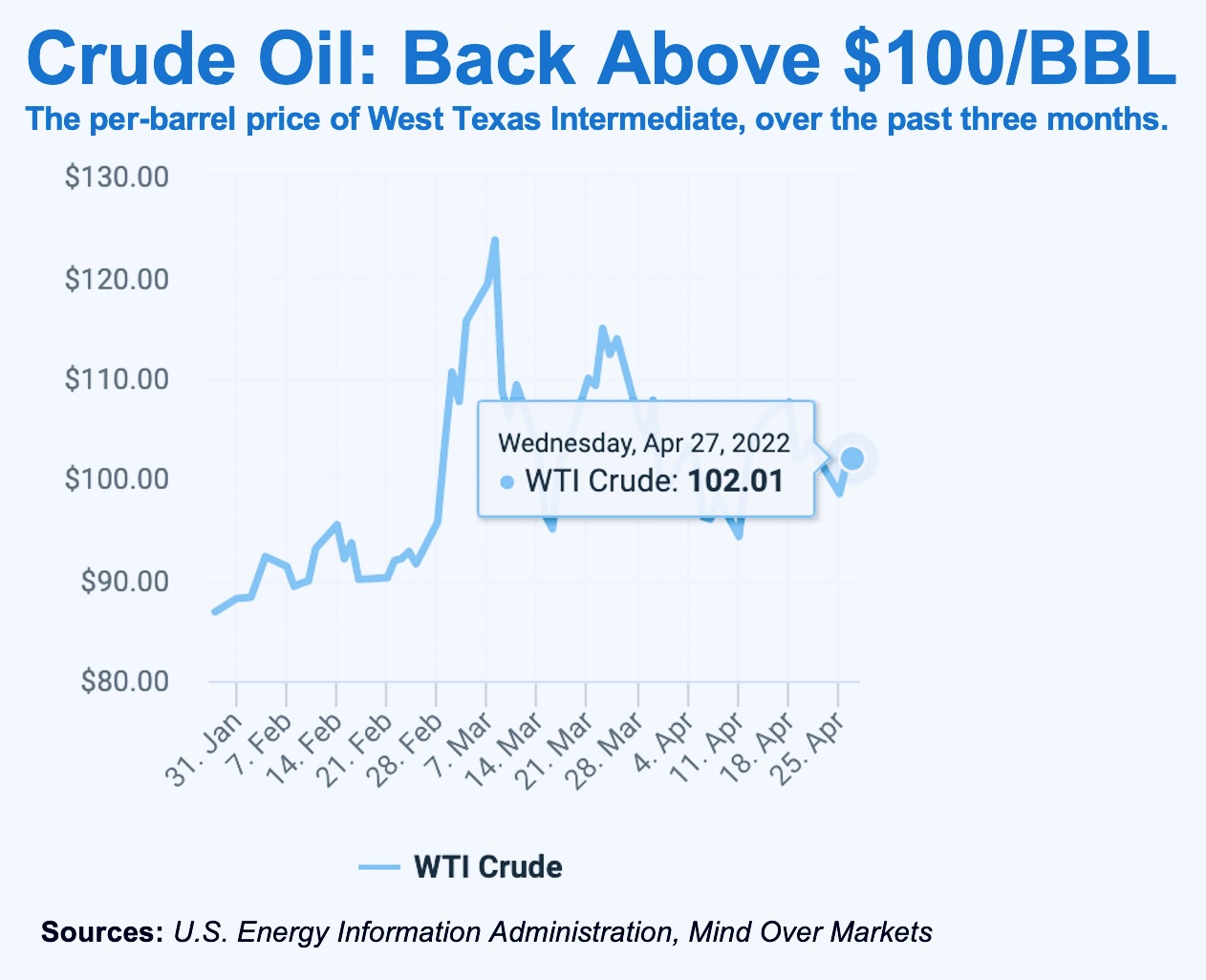 Gazprom is Russia’s state-controlled energy giant that supplies Europe with about 40% of its natural gas needs. The Kremlin has warned that any country not paying for Russian energy with rubles will face a similar cutoff.

The European Union is starting to regard Putin not as a world leader, but as a mob boss.

European Commission President Ursula von der Leyen stated Wednesday: “The announcement by Gazprom that it is unilaterally stopping delivery of gas to customers in Europe is yet another attempt by Russia to use gas as an instrument of blackmail. This is unjustified and unacceptable. And it shows once again the unreliability of Russia as a gas supplier.”

The EU is putting together a sixth round of sanctions against Russia, with a ban of Russian crude oil on the table.

The energy sector is bedeviled by other woes that can trace their origins to Putin’s attack on Ukraine. Also this week, pro-Ukrainian activists shut down oil pipelines in Germany, in retaliation for that country’s supposed lack of toughness with Russia.

What’s more, Russian hackers have targeted Europe’s renewable energy infrastructure. Putin’s war in Ukraine has forced much of Europe to look for alternatives to Russian fossil fuels. German wind power firms have been the targets of Russian hackers.

At the same time, U.S. and international organizations are getting hit by a ransomware group called Conti that originates from Russia.

Russian-based hackers usually operate with either the tacit, or explicit, support of the Kremlin. They’re often allied with the Russian spy services and their dark digital arts serve as an adjunct to the country’s foreign policy.

Cyberwarfare is a favored tool of Putin, a veteran of the KGB and a seasoned Cold Warrior. When Putin isn’t literally whacking someone, he’s hacking them.

It also doesn’t help that Putin has threatened to move nuclear weapons into Eastern Europe, in retaliation for Sweden and Finland announcing their intentions to join NATO. U.S. intelligence officials have warned that Putin is behaving irrationally and he might not be bluffing about triggering a nuclear holocaust.

A hedge against overseas risk…

Putin can use energy as a cudgel against the West, but he’s powerless to stop the forward momentum of cannabis and its ancillary industries.

We’ve seen many pot stocks explode on the upside this year, as legalization gathers steam. You haven’t missed the boat; there are plenty of reasonably priced cannabis investments still available, if you know where to find them.

That’s why I wrote a new book: The Wide World of Weed and Psychedelics. It’s your definitive guide for making money in the thriving cannabis and psychedelics industries. Click here to get your free copy.