I’m in Rhode Island as I write this, visiting family. In addition to dropping our Rs in conversation, we New England natives are known for worshiping the Red Sox.

This week, while watching my team Da Sawx (currently in eighth place) continue their struggles, I thought of the stock market. Many baseball principles apply to investing.

Don’t know where to invest amid today’s uncertain conditions? Let the ball come to you.

Every hitter has a spot in the strike zone where they prefer to hit the ball. Instead of chasing pitches, savvy sluggers have the discipline to wait for the right pitch.

During your investing career, you’ll get lots of pitches. Don’t swing indiscriminately. Below, I’ll show you an investment opportunity that’s in the “sweet spot” for any type of investor.

Read This Story: The Market Slump: How Bad Will It Get?

Stocks have been volatile so far this year, especially since Russia’s invasion of Ukraine in late February.

The European Union on Wednesday called for additional sanctions against Russian banks and energy companies, as well as against Kremlin-linked purveyors of disinformation.

Another major concern among investors is slowing economic growth in China. Aside from being an affront to human rights, Beijing’s authoritarianism also has economic drawbacks. The ruling elite is sometimes just plain wrong, but dissenters are afraid to speak up. History shows that’s how debacles happen.

China’s draconian response to the latest wave of COVID is a prime example. The country shut down major cities and industrial centers, without flexibility or debate. It’s a medically dubious strategy that hasn’t worked. Infections have soared, and the country’s economy is paying the price (see chart, published by Statista on May 3): 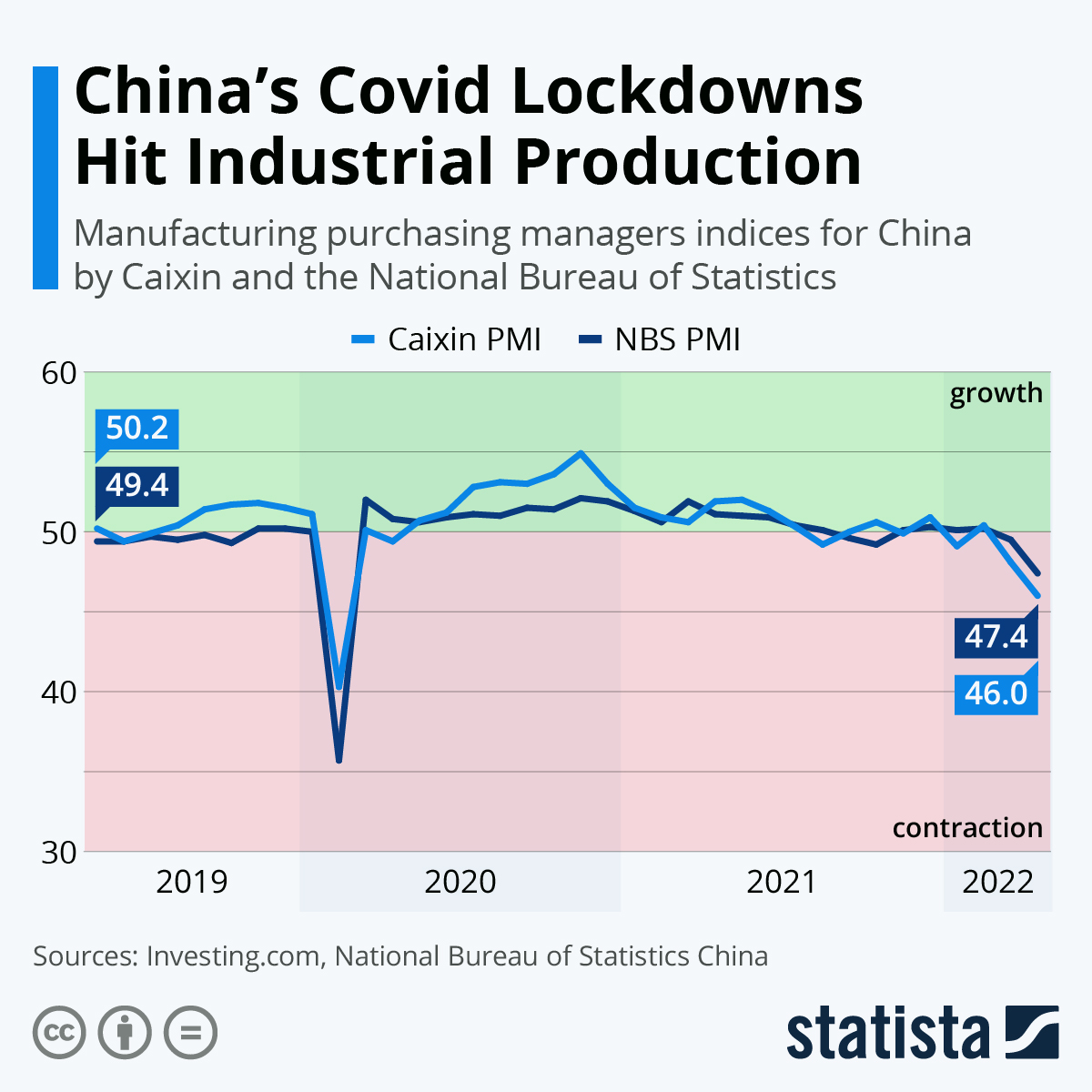 China’s endemic shortcomings have come to the fore lately, to wit: state-run “zombie” corporations that are over-leveraged but too big to fail, combined with top-down decision-making and a general lack of financial transparency.

In April, we witnessed a retreat by the largest investors in China’s junk property bonds, as firms slashed holdings against the backdrop of the still-unfolding crisis with China Evergrande Group (OTC: EGRNF).

Several Chinese real estate developers, including troubled Evergrande, recently warned that they could not release their quarterly financial results on deadline because of the Evergrande-triggered mess in the country’s real estate market.

But the big news this week concerns the Fed. Investors are keeping an eye on Federal Reserve tightening amid the two-day meeting of the policy-making Federal Open Market Committee (FOMC), which began Tuesday.

The dramatic rise in bond yields has been a crucial factor for the movements of both stocks and bonds. Accordingly, Wednesday’s FOMC meeting occupies center stage. The FOMC probably will reiterate its hawkish stance by boosting rates 0.5%, a level unseen since 2000.

The Fed’s increasing aggressiveness already is priced into the market, so I wouldn’t be surprised if equity investors shrug at the latest rate hike because they already know it’s coming. Wall Street hates surprises; a 0.5% rate hike would not be a surprise.

As inflation runs uncomfortably hot, the real Fed news will be found between the lines (as usual), by determining the possibility of further outsized rate hikes down the road.

In the sweet spot…

I continue to believe that risks are counterbalanced by positive fundamentals, especially on the corporate earnings front.

Looking for an investment pitch that’s belt high, and middle-of-the-plate? Consider the marijuana industry. The accelerating trend toward marijuana legalization is the money-making opportunity of a lifetime.

We’ve seen many marijuana stocks hit home runs this year. But you need to be selective.

For advice, turn to my new book: The Wide World of Weed and Psychedelics. It’s your definitive guide for making money in the thriving cannabis and psychedelics industries. Click here to get your free copy.