The Federal Reserve is raising interest rates even as there is evidence of significant slowing in the economy. In some parts of Texas, where the economy has been resilient, there are now emerging signs that confirm this dynamic.

I recently decided to see what the world was doing beyond my usual haunts. So, last week, I drove from Dallas to Galveston.

Given what I saw, I wonder if anyone at the Federal Reserve actually steps out into the real world.

Recently we saw that annualized U.S. gross domestic product (GDP) growth had “unexpectedly” fallen by 1.4% against analyst expectations of 1%. Among the key reasons cited in the mainstream were the following:

Certainly, those are valid contributors to a slowing economy. But one important fact was omitted from that list: the Federal Reserve is raising interest rates just as the economy is rolling over.

Inflation Now vs. Inflation in the 1970s

It’s obvious to anyone who buys groceries or fills up their gas tank that inflation is a current problem. In fact in some places, it’s likely to be running well ahead of the 8.5% increase in the March Consumer Price Index (CPI) and other frequently cited measures.

Moreover, under normal circumstances, I would agree with the Fed raising rates aggressively to quell inflation, perhaps even as aggressively as the central bank did in the Volcker era, during the 1970s.

The problem is that this bout of inflation is different from the inflation in the 1970s. Specifically, the 1970s inflation resulted from the fact that the Nixon administration removed the U.S. dollar’s peg to gold. This increased money supply and created an inflationary spiral. Combined with price controls, we were treated to stagflation.

In contrast, today’s inflation has resulted from the Fed’s quantitative easing to fight the effects of the COVID pandemic and economic shutdowns. This too increased money supply.

While both inflationary periods were due to increases in money supply, the current inflation is lingering because the factories that went off-line due to COVID have not returned to full operations. This has created a scarcity of goods.

So, yes, there is too much money chasing too few goods.

The Fed’s World vs. the Real World

In the Fed’s world, there are numbers and statistics such as CPI and the central bank’s favorite inflation gauge the Personal Consumption Expenditures gauge (PCE), which recently rose at the fastest rate since 1992 (6.6%) when food and energy prices are included.

While those numbers paint an inflationary picture, what I saw on my recent trip to Galveston was of concern. First, the I-45 corridor is usually a very busy road and Houston is usually a vibrant city. But on this trip, I-45 was noticeably slower than on previous trips and Houston seemed sluggish.

Indeed, a regional slowing in South Texas makes sense given that Houston’s economy is largely based on oil, chemicals, and shipping. These three areas have been hit the hardest by COVID and now the war in Ukraine.

Perhaps what’s most disturbing is that even with the price of oil well above $100 per barrel, Houston doesn’t seem to be what it once was.

Moreover, there seems to be a negative trickle-down effect.

South of Houston, there are signs for master-planned communities with little on them beyond the model homes. Even more alarming, north of Houston, in Conroe, Texas, two builders are offering homes with “zero down” payments.

If this sounds eerily similar to what we saw in 2007-2008 before the housing crash, you’re right. When you put this in the context of the current relationship between the stock market and the economy, it’s hard not to be concerned.

On the Bright Side

That said, Houston’s problems weren’t as noticeable in Galveston. Even in the off season and during the week, traffic in this vacation town was healthy. Restaurants were filled, and shopping establishments ranging from souvenirs to grocery stores had plenty of business.

Most people I spoke to admitted that business was a little slow but they expected a pickup by the weekend and for the regular season which starts on Memorial Day.

Even more interesting was the line of boats at the harbor which stretched well beyond what I had seen before.

Finally, there was a great deal of “fixer-upper” activity in Galveston, where by local rules, old homes are endlessly restored.

The Stock Market Is Fuel for the Economy

But here is where the Fed seems to be out of step. The stock market now fuels the economy, in what I call the MELA system, where M is for markets, E is for the economy, L is for life decisions, and A is for the effects of artificial intelligence on today’s world.

The chart above shows the close correlation between S&P 500 stock prices (SPX, lower red line) and PCE (upper blue line). Here’s how it works. When the stock market is doing well, 401k plans, Individual Retirement Accounts (IRAs), day trading, and crypto accounts do well. As a result, people are willing to spend money, often on large items such as homes or automobiles.

As the chart also shows, when stocks crash, so does spending, which slows the economy.

Moreover, the PCE data in this figure is lagging the SPX. But we know that GDP has fallen, which suggests that once again PCE is about to roll over. 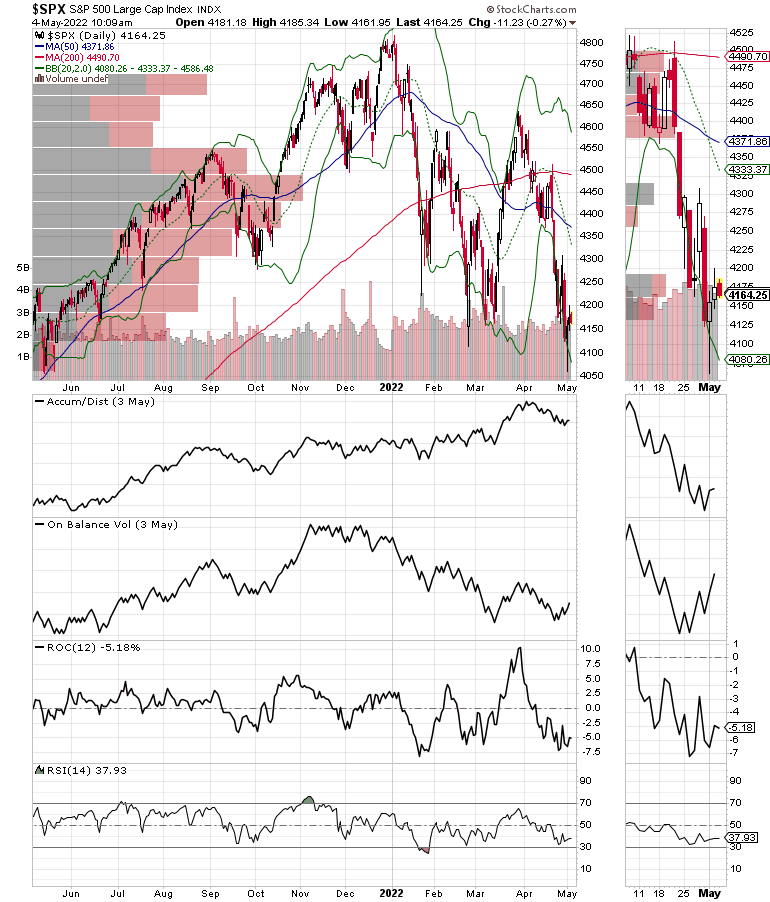 In fact, a closer look at SPX suggests that the market is starting to price in what could be a meaningful economic slowdown. How much pain can a 401k plan take before consumers start to pull back on their spending?

If we insert my I-45 observations, especially what I saw in regards to the housing market in the Houston area, it suggests that in the real world, higher interest rates from the Federal Reserve are already having a negative effect.

Therefore, to fight higher prices this time around, more supply needs to come on line. And that means more factories need to open and more items need to be manufactured to meet the public’s demands.

There are some bright spots for sure, as I noted above. Yet, positive economic activity seems to be spotty rather than all-inclusive.

Despite positives, even in areas of the country which have done better than others, the economy is feeling the stress of the Fed’s policies.

The Fed is raising rates aggressively when the economy is already slowing. That could prove a massive mistake.

A Note From The Publisher: Our colleague Dr. Joe Duarte just provided you with valuable investing insights. There’s a sector he didn’t mention that deserves your special attention right now: marijuana.