Federal Reserve Chair Jerome Powell stated earlier this week that it was possible for the U.S. central bank to fight inflation without pushing the economy into a recession. This monetary balancing act is known as a “soft landing.”

“We have a good chance to have a soft or softish landing,” Powell said during his Wednesday press conference, at the conclusion of a two-day meeting of the policy-making Federal Open Market Committee (FOMC).

If I were a passenger on an airplane, and my pilot announced over the intercom his intention for a “soft or softish landing,” I’d white-knuckle the armrest and order a stiff drink.

After the opening bell Friday, stocks were trading in the red as investors worried that the latest signs of robust jobs growth could worsen inflation and prompt an even more aggressive response from the Fed. The benchmark 10-year Treasury note ticked higher and currently hovers above 3.1%.

The week’s strongest assets have been traditional safe-havens such as gold and the U.S. dollar. The weakest have been real estate and consumer discretionary.

Don’t check your 401k balance anytime soon. It’s been a dismal year so far for the stock market. Thursday was the worst day for equities since the nadir of the coronavirus outbreak in March 2020.

Large-cap tech stocks are taking it on the chin. Rising interest rates and growth stocks don’t play well together.

Stocks had staged a relief rally on Wednesday, after the Fed announced an 0.5% increase in the federal funds rate, the largest in two decades and the second such hike in two months. Higher rates are “baked into the cake,” to use analyst lingo, so the lack of surprises on monetary policy encouraged Wall Street.

But the bullishness didn’t last long. Stocks fell off a cliff the very next day, as uncertainty over economic growth, inflation, and Fed hawkishness came to the fore.

Exacerbating the gloom among investors was Labor Department data released Thursday that showed the productivity of American workers and businesses declined at a 7.5% annual pace in the first quarter of 2022, the largest drop since 1947.

At the same time, labor costs as measured against productivity climbed 11.6%, pushing the increase over the past four quarters to 7.2%, the fastest rise in about 40 years.

But then we got some positive economic news.

On Friday, the Labor Department reported that total nonfarm payroll employment increased by 428,000 in April, versus 380,000 expected, and the unemployment rate remained unchanged at 3.6%.

Jobs growth in April was widespread, led by gains in leisure and hospitality, in manufacturing, and in transportation and warehousing. Over the past 12 months, average hourly earnings have increased by 5.5%. 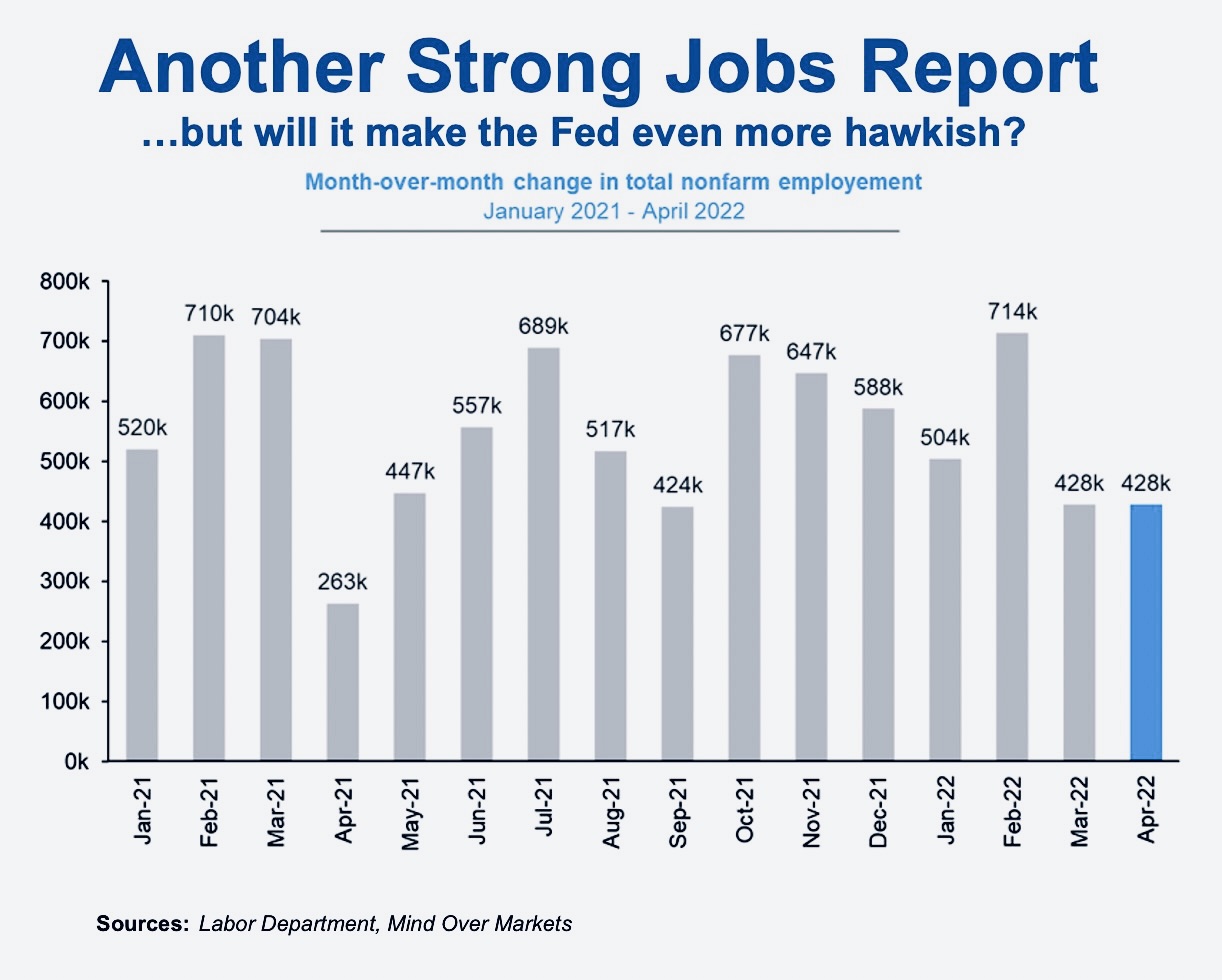 As you can see from the above chart, the U.S. economy has brought back payrolls every month to date in 2022. And yet, stocks started Friday’s trading session in negative territory. Sometimes on Wall Street, good news is bad news.

The persistent pandemic, supply shortages, and production logjams are contributing to declining productivity. But here’s the insidious part: wage costs are rising, while productivity is falling. That’s a bad combination and it bodes poorly for economic performance moving forward. What’s more, history shows that the Fed rarely pulls of a soft landing. You’d better buckle up.

That said, corrections are an integral part of investing. Since the early 1970s, we’ve witnessed 18 corrections of 10%+ (during non-recessionary periods). On average, equities have rebounded by about 17% over the next six months.

Want to tap future growth, but mitigate the risks I’ve just described? Consider the booming marijuana industry. The “green rush” is resistant to inflation, rising rates, and recession. But when buying pot stocks, you need to be selective.

I’ve done the homework for you, in my new book: The Wide World of Weed and Psychedelics. It’s your definitive guide for making money in the thriving cannabis and psychedelics industries. Click here to get your free copy.