I directly experienced the double-digit inflation of the 1970s, while attending college. During those inflationary tribulations, I subsisted on ramen noodles and bargain beer. Few U.S. investors born after 1980 know the pain of rising inflation. But they’re quickly finding out.

The U.S. Bureau of Labor Statistics reported Wednesday that U.S. inflation slowed last month for the first time since November 2020, as measured by the CPI for All Urban Consumers (CPI-U).

The data provided a conflicting picture of consumer prices, but also glimmers of hope that perhaps inflation, although still hot, has peaked (see chart). 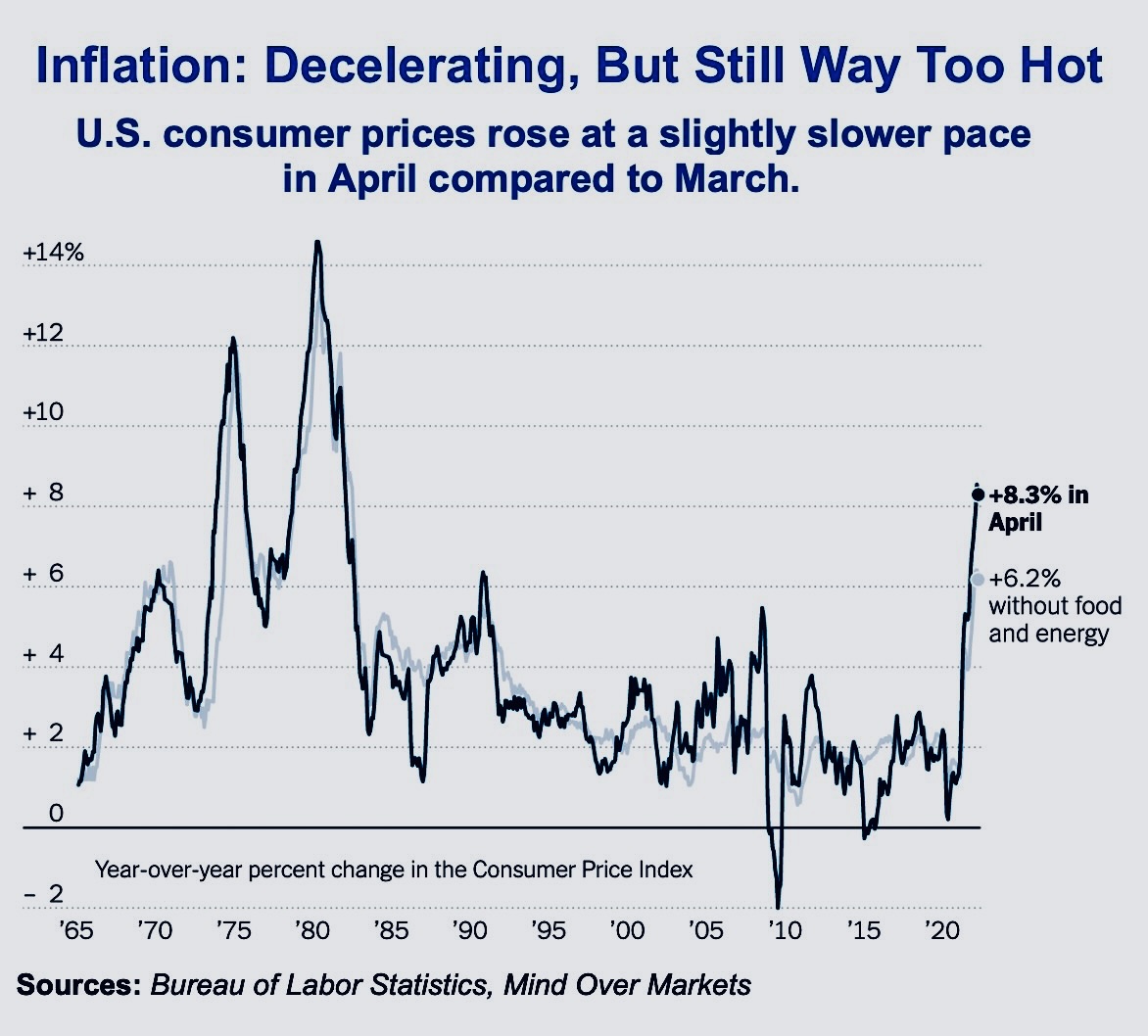 Although it appears to be decelerating, the all-items CPI-U (aka “headline inflation”) still hovers at a 40-year high. Core inflation, which excludes volatile food and energy prices, rose 0.6% compared to 0.3% one month ago in March, and higher than the 0.4% pace that economists had expected. Over the last year, the energy index rose by 30.3% and the food index by 9.4%.

The Bureau of Labor Statistics reported Thursday that the U.S PPI, month-over-month for April, came in at 0.5% versus 1.4% in the previous month and in line with estimates. Year-over-year, April’s PPI came in at 11.0% versus 11.2% in March; the estimate called for 10.7%.

My takeaway: The core PPI came in way lower than expected, and that’s finally some good news on inflation. Because the PPI measures wholesale price changes before they reach consumers, the PPI is an earlier predictor of inflation than the more popularly followed CPI.

In pre-market futures contracts Thursday, U.S. stocks were trading in the red as investors tried to make sense of the perplexing CPI and PPI numbers.

As of this writing, the CBOE Volatility Index (VIX) hovers at about 34. VIX values below 20 generally indicate stable periods in the markets.

Supply disruptions caused by COVID and Russia’s escalating war in Ukraine are largely to blame for skyrocketing energy and food costs.

Inflation-adjusted earnings continued to decline for workers, dropping 2.6% over the past year due to the soaring cost of living. As inflation lingers, inflation expectations are edging higher, creating the danger that inflation will become a self-fulfilling prophecy and more structural, which is exactly what happened during the 1970s.

The informal definition of inflation is too much money chasing too few goods. The formal Webster version goes like this: “a general increase in prices and fall in the purchasing value of money.”

But the most important definition of inflation is that of the Federal Reserve’s, which reads like this:

Federal Reserve policymakers evaluate changes in inflation by monitoring several different price indexes. A price index measures changes in the price of a group of goods and services.

This characteristically convoluted definition by the Fed carries the most weight because it drives decisions made by the most influential bank in the world.

The Fed faces a difficult task ahead. After several months of downplaying the inflation threat, the Fed is playing catch-up.

Critics of the Fed contend that it reacted too late to rising inflation; defenders argue that the combination of a pandemic and war in Ukraine created unique challenges that even the shrewdest policymakers could not have foreseen.

Watch This Video: Market Meltdown Ahead?

Within the volatile and risky context I’ve just described, you should increase your exposure to gold, the traditional inflation hedge. The value of gold tends to increase as the purchasing power of the dollar declines.

About 5%-10% of your hedges sleeve should contain gold-linked assets. My preferred way to profit from increases in gold prices is through small-cap miners that can put operating leverage to work.